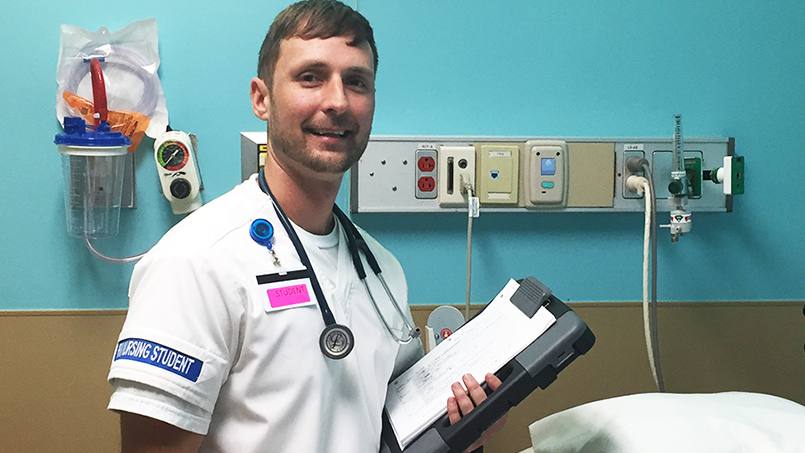 After lengthy treatment for metastatic colon cancer, not only did Don Guillot emerge with the disease in remission, he also came away inspired to pursue a future in nursing.

The coming year is going to be an exciting one for Don Guillot. In 2018, he's getting married, and he's graduating from nursing school as an oncology nurse — a career choice heavily influenced by his own recent journey through cancer.

Diagnosed with advanced colon cancer, Don faced a treatment regimen that included multiple rounds of chemotherapy and several major surgeries that required the expertise of specialists at Mayo Clinic. But through it all, Don maintained an upbeat attitude. Today, with the cancer in remission, Don is eager to head into his future.

"Don's story is an inspirational one, especially his perseverance and positive attitude over the course of a tough battle," says Mayo Clinic medical oncologist, Kabir Mody, M.D. "It also demonstrates the importance of management of a complex disease by a multidisciplinary team of experts."

Stunned by an alarming diagnosis

In November 2014, the now 31-year-old resident of Port St. Joe, Florida, began having intermittent diarrhea and abdominal pain. Those symptoms increased, and he started noticing blood in his stool. Then working as a medical assistant in Lady Lakes, Florida, Don went to see a local gastroenterologist in January 2015. That led to a colonoscopy. Don was shocked when the doctor shared the results with him.

A PET-CT scan confirmed the diagnosis and also revealed that colon cancer had spread to Don's liver, as well as to lymph nodes outside the rectum. Because of this complicated diagnosis, Don was referred to Mayo Clinic.

Forging ahead with a novel surgery

"Dr. Asbun has such a positive vibe," Don says.

Dr. Asbun recommended Don have six rounds of chemotherapy followed by a procedure known as ALPPS to remove the 10 tumors that were on his liver. ALPPS stands for associating liver partition and portal vein ligation for staged hepatectomy. The procedure is usually only recommended for people who have advanced liver cancer.

During the two-part procedure, surgeons cut off the blood supply to the side of the liver with the tumors. The liver tissue is then partially divided to prevent blood flow crossover between the two sides.

"The ALPPS procedure is reserved for centers like Mayo Clinic that have a high volume of liver surgeries and a multidisciplinary team that can jointly decide which patients are good candidates for the procedure." — Horacio Asbun, M.D.

"It is believed that partially dividing the liver provokes the secretion of growth type tissue factors that stimulate faster growth of the healthier part of the liver," Dr. Asbun says.

Once that growth takes place, the patient undergoes a second surgery, which consists of completely removing the side of the liver affected by cancer.

"The ALPPS procedure is reserved for centers like Mayo Clinic that have a high volume of liver surgeries and a multidisciplinary team that can jointly decide which patients are good candidates for the procedure," Dr. Asbun says.

Don went through the first surgery in June 2015 and then had another round of chemotherapy. On Sept. 7, 2015, his care team moved forward with the second surgery and removed the right side of Don's liver. That was followed by six more rounds of chemotherapy.

Continuing the journey to remission

After the cancer was removed from his liver, Don went to see Mayo colorectal surgeon Ron Landmann, M.D., in January 2016 to discuss how to deal with the cancer in his colon. During that appointment, Dr. Landmann shared with Don that he had reviewed images taken during a flexible sigmoidoscopy, and they showed a positive response to the chemotherapy.

"I was really excited that the chemo worked," Don says. "The side effects are really hard on the body, and sometimes you wonder, 'Is this even worth it?'"

"During my chemo, I got this huge respect for the nurses because they are just top-notch." — Don Guillot

A multidisciplinary tumor board met to review Don's case and voted in favor of colorectal surgery. On Feb. 10, 2016, Dr. Landmann removed Don's rectum and 11 lymph nodes, and restored his bowel continuity, avoiding the need for a permanent stoma (or bag) to eliminate waste. One of the lymph nodes was positive for cancer, so Don underwent another four rounds of chemotherapy through the end of May.

By November 2016, it seemed Don's treatment was done. During a follow-up scan in March 2017, however, Dr. Mody found a small lesion on Don's liver. Blood work confirmed his tumor markers were rising. Dr. Asbun met with the tumor board once again. The board recommended Don undergo an ablation procedure to destroy the lesion. Since that procedure in April 2017, three follow-up scans have been clear of any sign of cancer.

Prior to finding out he had cancer, Don was thinking seriously about becoming a physician assistant. But the nurses who helped him get through the many rounds of chemo inspired him to choose a different route.

"I started getting interested in the nursing profession," Don says. "The nurses talked to me about all the directions you can take with nursing, and I decided to apply to nursing school."

He's planning to look for a position as an oncology nurse after he graduates in May.

"The nurses are there throughout really holding your hand. The chemo nurses walked me through all the medications and explained what to do and what not to do," Don says. "During my chemo, I got this huge respect for the nurses because they are just top-notch."