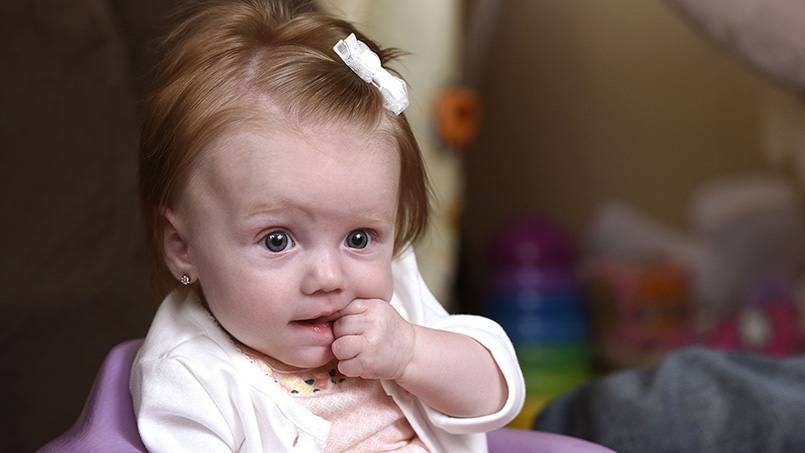 When Jordyn LaMont was born with serious health concerns, it was a harrowing repeat of a situation her mother had lived through before. But this time, specialists at Mayo Clinic were able to get to the root of the problem and provide the family with answers.

Amid baby babble, Jordyn LaMont's eyes grow wide with excitement as she spots her father, Brandon LaMont, and he bursts into a wide smile, playfully raising her toes to his face.

Although it seems like a typical interaction, to get Jordyn to the point of happily playing with her parents took a team of Mayo Clinic specialists and included an investigation of her genetics. What those test revealed reaped rewards not only for Jordyn's health, but for her family overall.

"This gene mutation was really rare, and for that team to have found it, they have found literally a lifetime full of answers for my family," Stacey says.

The budding personality Jordyn has today is a far cry from what Brandon and Stacey saw as their baby entered the world in January 2017. When she was born, Jordyn was blue and gasping for air. The scene was hauntingly familiar to Stacey. In 2008, her 2-day-old daughter, Mya, died from pulmonary hypertension — a type of high blood pressure in the lungs.

"[My doctors] monitored this pregnancy and thought everything would be OK. In hindsight, we were watching the wrong thing." — Stacey LaMont

"My doctors thought then it was caused by low amniotic fluid," she says. "They monitored this pregnancy and thought everything would be OK. In hindsight, we were watching the wrong thing."

Roughly 12 hours after Jordyn's birth, the newborn was rushed by air ambulance to Mayo Clinic's Rochester campus. There, a team of Mayo Clinic pediatricians, cardiologists, neonatologists, a medical geneticist and the director of the clinical genetic sequencing lab worked collaboratively to find a cause and treatment for Jordyn's distress.

Shining a light on the solution

While her care team worked to keep Jordyn healthy, experts in the Mayo Clinic Center for Individualized Medicine searched for the underlying source of the baby's medical concerns. Tests revealed a genetic defect linked to pulmonary hypertension and to a condition called small patella syndrome — a rare disorder that affects the knees.

"I waited nine years, not knowing the real cause of my first baby's health problems. It's amazing to finally have answers." — Stacey LaMont

With that information, the pieces of the puzzle came together. The DNA results shed new light on two very different health issues in the LaMont family: a history of knee problems and heart problems.

"I waited nine years, not knowing the real cause of my first baby's health problems," Stacey says. "It's amazing to finally have answers. I wish genetic testing would have been available to us in 2008."

This discovery eliminated the need for additional testing and pointed the health care providers to medication compatible with Jordyn's genetic makeup.

"The results simplified and streamlined our focus on the right treatment," says Mayo clinical geneticist Brendan Lanpher, M.D. "The test results had a very meaningful impact for the baby and her extended family. It was very cool."