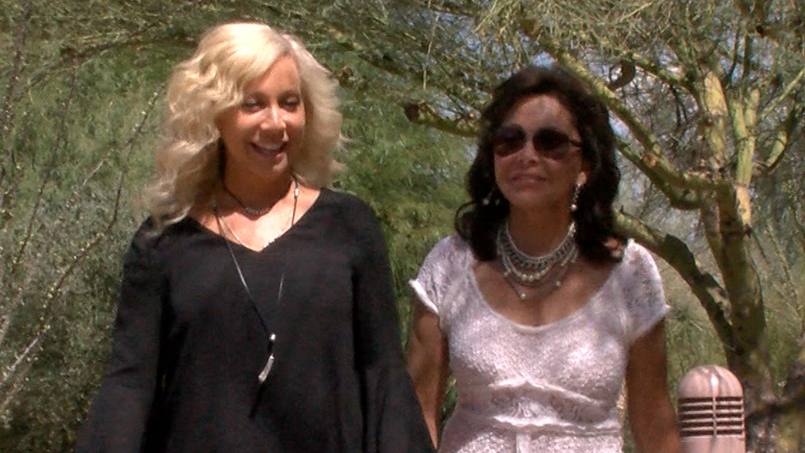 Michele Sabados' care team at Mayo Clinic worked together to craft an individualized care plan to treat her advanced breast cancer. It paid off. Today, Michele's cancer is gone.

Michele Sabados beams when she announces she is cancer-free, convinced she will see her children graduate from college and get married — and that she will grow old with her husband.

Her optimism was not so apparent when her world was rocked 10 years ago by a diagnosis of stage 3 breast cancer. She underwent a mastectomy and a course of chemotherapy. Then, 2½ years later, Michele was hit with a second shattering diagnosis. The cancer, by then stage 4, had spread to her lung. She was not prepared to be told that she perhaps had only two years to live.

Michele wasn't willing to take that prediction as the final word on her future. A comprehensive search for second opinions brought her to a care team at Mayo Clinic that created a treatment plan to put her cancer in remission.

"What used to be a uniformly fatal disease is now treatable," says Dawn Jaroszewski, M.D., a Mayo Clinic cardiothoracic surgeon. "It's not 100 percent. Not everyone is cured. But many patients are, and the better we get with diagnoses and chemo, and other things, the more people are surviving this and beating cancer."

But the road to that positive outcome wasn't an easy one for Michele.

After her she found out the breast cancer had spread to her lung, Michele says she allowed herself half an hour of crying with her husband in the oncologist's office.

"Then I gathered up all my medical records and went on a tour of half of the country to get second opinions," she says. "I wasn't going to accept that diagnosis. My children were young."

Her journey to explore second opinions was educational, Michele says. She visited various medical centers in the western part of the U.S. After numerous meetings, she decided to seek care at Mayo Clinic. Doctors advised her to see a breast oncologist. That piece of advice led Michele to Donald Northfelt, M.D., a medical oncologist at Mayo Clinic's Arizona campus.

Dr. Northfelt says he was not surprised at Michele's resolve to reject her original diagnosis, noting he is "happy with patients who want to take charge of their health care and to go on and find other options. She's that kind of person."

Michele engaged in a candid exchange with Dr. Northfelt about how to move forward, including a discussion about genetic testing. They agreed the cancer would first be carefully removed from Michele's lung. The cancer tissue would then be sent for genomic profiling analysis to help identify the best course of treatment to prevent the cancer from coming back again.

Dr. Northfelt knew Michele would need a highly skilled surgeon for their plan to succeed. He recommended Dr. Jaroszewski to remove the cancer in Michele's left lung.

Dr. Jaroszewski explains that because of her specialty in treating cancers in the chest, she was able to remove Michele's lesion in her lung. She was witness as well to Michele's determination to take control of her destiny as best she could.

"She had a wonderful attitude," says Dr. Jaroszewski, recalling that Michele insisted, "'I don't have time to die. I have a family to take care of. I've got things to do.'"

"Michele underwent a course of specifically targeted chemotherapy and biologic therapy. At the time, this was a somewhat controversial approach that was under study at Mayo Clinic and elsewhere." — Donald Northfelt, M.D.

When the lung surgery was complete, Michele's team worked together to follow through on the next planned steps.

"A genomic analysis was performed on the breast cancer deposit resected from her lung, and her treatment plan was formulated based on that analysis," Dr. Northfelt says. "As a result of that analysis, Michele underwent a course of specifically targeted chemotherapy and biologic therapy. At the time, this was a somewhat controversial approach that was under study at Mayo Clinic and elsewhere. However, in the ensuing years, this has become a standard approach, and additional research to refine these methods continues at Mayo Clinic."

"I was adamant about wanting that genomic testing, and Dr. Northfelt was willing to do that," Michele says. "I believe that because of him, I am here today."

Benefitting from the team approach

Michele praises her Mayo caregivers, especially the way Dr. Northfelt "partnered with me and how he listened and felt my conviction," she says. In turn, Dr. Northfelt credits Michele's resiliency and drive for contributing to her success.

"She's a courageous person and took this on, and never looked back," he says.

"As a team, we carefully deliberated over Michele's situation, thinking about the options for her care," he says. "We decided to take an aggressive approach to her cancer, removing the lung tumor and then administering the chemotherapy."

"At the end of the day, the nurses make the most difference. They are right there with the patient at every step of their process of care." — Donald Northfelt, M.D.

An integral part of that team is the nurses who care for patients like Michele.

"At the end of the day, the nurses make the most difference," Dr. Northfelt says. "They are right there with the patient at every step of their process of care. It's the nurses who deliver the care we are recommending."

The results of the treatment plan the team developed for Michele turned out to be exactly what they all had hoped for.

"Michele is one of a population that is basically treated and cured with chemotherapy and resection, and those are the wonderful advancements that have happened in medicine," Dr. Jaroszewski says.

Back home in Boise, Idaho, Michele and her family members are enjoying her return to good health and have committed to maintaining a healthy lifestyle by eating well and exercising.

"Nobody's perfect," Michele says. "But I do try to be very conscientious of what I eat and how I live."

Michele returns to Mayo Clinic each year for a medical review with Dr. Northfelt. Now she is more than seven years cancer-free. That's something she takes pride in. "I've been told I am one in a million," Michele says.