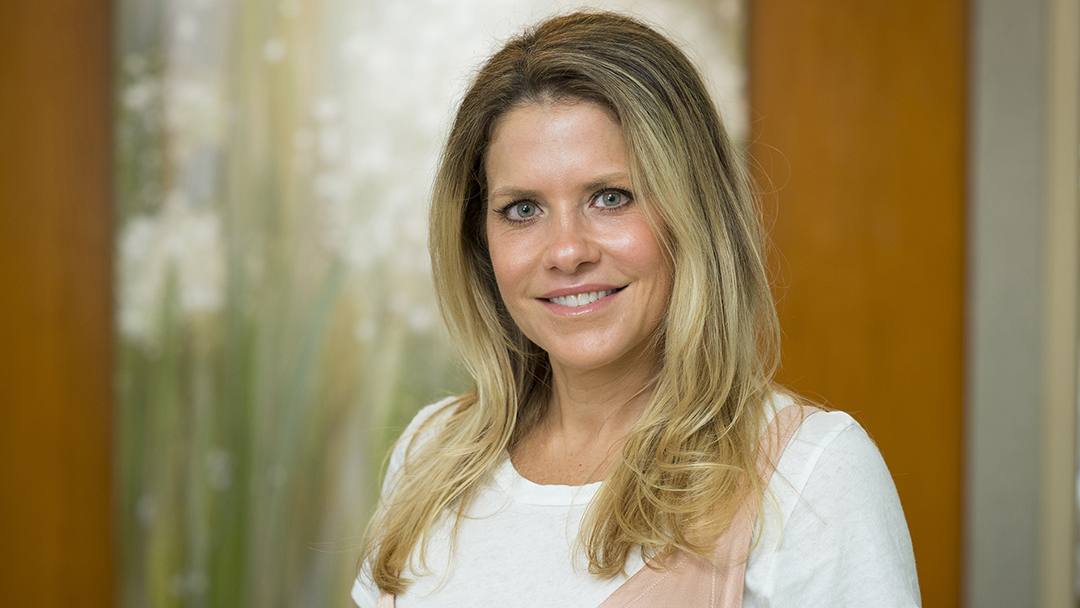 Diagnosed with breast cancer, Kristin Ferguson needed chemotherapy after a mastectomy. Uneasy about losing her hair, she was relieved to be offered a way to keep her long locks intact with scalp cooling therapy.

It was during a March 2016 visit to the hair salon that Kristin Ferguson first heard about scalp cooling therapy. She was admiring another customer's hair and was shocked to learn the woman had been treated with chemotherapy for breast cancer. Many patients lose their hair during treatment, but this woman had worn a special cap that prevented the chemotherapy medication from reaching her hair follicles.

Nine months later, that information would be valuable for Kristin when her annual mammogram revealed a suspicious spot in her left breast. After a biopsy, she learned she had invasive lobular carcinoma — a type of breast cancer.

"I got a call from my OB-GYN. He said, 'I can get you in here, or if you want a comprehensive approach, you can go to Mayo Clinic,'" Kristin says.

Recognizing the complexity of her unexpected diagnosis, the 45-year-old wife and mother of three teenagers opted to have her care at the Robert and Monica Jacoby Center for Breast Health on Mayo Clinic's Florida campus.

"I didn't want to be the one managing all my appointments," Kristin says. "I wanted a dedicated team and everyone to confer on my diagnosis and decide what the best plan was for me."

Although Kristin hoped she would only need to have a lumpectomy and radiation therapy, further testing revealed an additional tumor on her pectoralis muscle. That meant she would need a mastectomy.

On Feb. 9, 2017, Sarah McLaughlin, M.D., a Mayo Clinic breast surgeon, performed a double mastectomy and began the breast reconstruction process. One of the benefits of Mayo Clinic's approach is being able to have those procedures performed simultaneously. Cells from Kristin's tumor also were sent for genetic review to learn whether she would need additional treatment.

"Patients don't want to be reminded that they're getting chemo every time they look in the mirror." — Saranya Chumsri, M.D.

"The genetic makeup of the tumor is important. It helps us tailor the treatment to each patient," says Saranya Chumsri, M.D., a Mayo Clinic medical oncologist. "Kristin's results indicated she had a more aggressive type of cancer that would benefit from chemotherapy."

Kristin was ready to move forward with the treatment. But one aspect of it still bothered her.

"Out of everything, the hardest thing was the thought of losing my hair," she says. "I have three boys, and I didn't want them to think I was sick."

Thinking back to the woman at the salon, Kristin asked Dr. Chumsri about the device to minimize hair loss. Kristin was thrilled to learn Mayo Clinic offered scalp cooling technology. 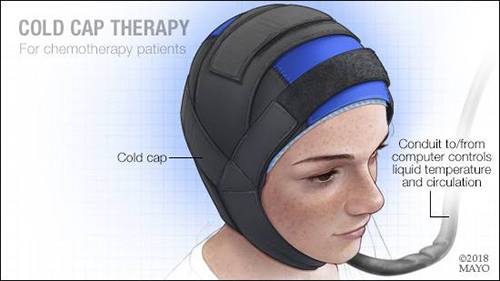 "Losing your hair is one of the most devastating side effects of chemo," Dr. Chumsri says. "Patients don't want to be reminded that they're getting chemo every time they look in the mirror."

Scalp cooling therapy involves patients wearing a customized cap that is cooled to 32 degrees Fahrenheit, beginning about 30 minutes prior to chemotherapy. The cold constricts blood vessels in the scalp and limits how much of the medication flows to the hair follicles. Patients also wear the cap for a few hours after therapy.

"Sixty percent of patients using the cold cap still retain enough hair so as not to need to wear a wig," Dr. Chumsri says.

Kristin completed her chemo in May 2017 — long locks intact. Now considered cancer-free, Kristin says she's focused on staying healthy and giving back to other women in need. And she's grateful for everyone at Mayo Clinic who helped her reach this point.

"My experience at Mayo has been amazing. All my doctors are so knowledgeable," Kristin says. "I feel really comfortable with them and trust them immensely."

"I wasn't going to let cancer physically change or identify me." — Kristin Ferguson

Kristin, who co-owns a fashion boutique in Neptune Beach, Florida, says that using the cold cap to keep her hair was a significant boost to maintaining her positive attitude during this journey.

"I wasn't going to let cancer physically change or identify me. At first, I thought vanity was the reason. But then I quickly realized that wasn't it at all," Kristin says. "It was about self-preservation. I wanted to look in the mirror and still see me."