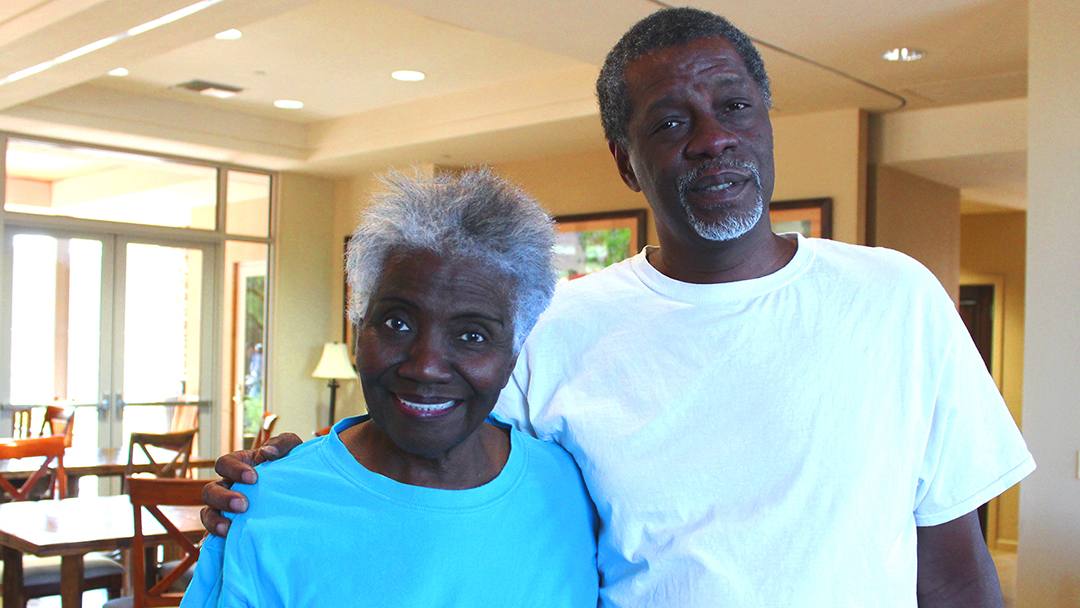 Gloria Hughes and her son, Marcus.

Gloria Hughes endured episodes of terrible pain for more than a decade before a chance meeting between her local physician and a Mayo Clinic neurosurgeon finally paved the way for desperately needed relief.

Fifteen years ago, Gloria Hughes was driving down the freeway in Shreveport, Louisiana, when she suddenly was hit by throbbing, stinging pain. She remembers that it burned like a blowtorch from her ear to her throat.

"I thought I'd been shot," Gloria says. She pulled over and searched her body for a bullet wound, but there was none to be found.

"Then the pain just magically went away, and I continued about my business," she says.

The episode left her puzzling over what could have caused such inexplicable trauma. Her respite from the pain lasted just one week. Then it roared back and took over her life.

Gloria's son, Marcus, remembers his mother frequently screaming in pain, unable to find relief. All she wanted was to learn what was causing the terrible episodes and make them stop. "I couldn't even eat or drink," Gloria says.

It would take Gloria, now 77, more than a decade to find her answer. That answer came when, through a circuitous journey, she met Richard Zimmerman, M.D., a neurosurgeon at Mayo Clinic's Arizona campus.

The years Gloria spent looking for medical help were fraught with misdiagnoses, dismissive doctors and people who questioned her symptoms.

"Something was definitely wrong, and I was determined to figure it out," Gloria says. She credits her determination and spunk to the years she worked as a mutuel clerk, selling and cashing tickets at a Louisiana racetrack.

After years of searching, Gloria found a kindly physician in Louisiana who listened to her and did not doubt her symptoms.

"He was 83 and soon to retire, so he was pretty old school and had seen this type of disorder in his practice over the years," she says.

"My doctor in Shreveport just lit up and was so excited when he told me that he had talked with Dr. Zimmerman, and there was hope for my condition." — Gloria Hughes

The doctor told Gloria that her condition could be a rare nerve problem. But the real breakthrough came when her physician attended a Mayo Clinic continuing professional development course in Arizona.

At that meeting, Dr. Zimmerman gave a presentation about trigeminal neuralgia and other craniofacial pain disorders. After the presentation, the two physicians had an opportunity to talk at length about Gloria's challenging condition. Dr. Zimmerman agreed to review Gloria's MRI images to gather more information.

A solution at last

"My doctor in Shreveport just lit up and was so excited when he told me that he had talked with Dr. Zimmerman, and there was hope for my condition," Gloria says.

The MRI confirmed what Dr. Zimmerman had suspected after his conversation with Gloria's physician. Gloria had a rare pain condition called glossopharyngeal neuralgia. The disorder affects the glossopharyngeal nerve — a nerve located deep within the neck — and can trigger sharp, stabbing pain in the back of the throat and tongue, the tonsils and the middle ear. It's often caused by a small blood vessel pressing on the nerve.

Dr. Zimmerman believed he could help. Gloria was up for any amount of travel to get relief and came to Mayo Clinic's Arizona campus. Dr. Zimmerman examined her and discussed the risks and potential benefits of surgery to relieve the pressure on her nerve. Gloria was all-in to proceed.

"I had faith in Dr. Zimmerman," she says.

"The nurses at Mayo Clinic Hospital are the best I've ever had." — Gloria Hughes

The surgery took place on Sept. 20, 2017. Just one week later, Gloria was out of the hospital. She and Marcus — whom she describes as a "very good caregiver to his mother" — stayed at the Help in Healing Home at The Village at Mayo Clinic on the campus of Mayo Clinic Hospital.

Gloria is grateful for the expert surgical care she received and all the team members who took care of her.

"The nurses at Mayo Clinic Hospital are the best I've ever had," she says.

Since the surgery, Gloria says she is feeling better and enjoying renewed optimism for the years ahead, adding, "There's hope for me now."

Dr. Zimmerman was my physician too. The perfect neurosurgeon for my brain as well.