Back to Nature After Specialized Care for a Disabling Condition 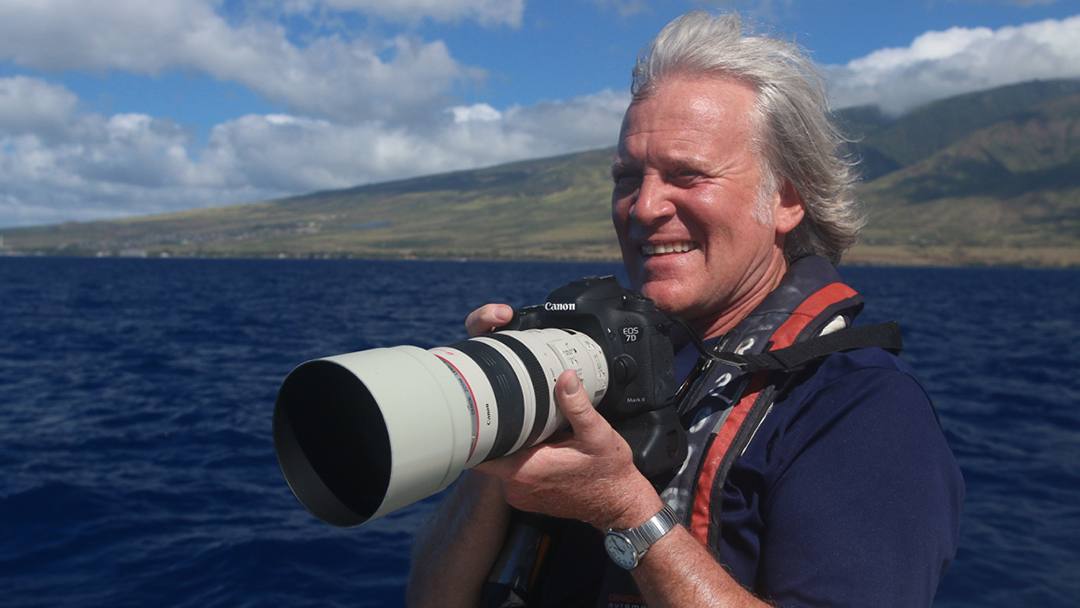 When Michael Rybak began to have trouble moving his arms, he feared his days of enjoying the outdoors may be over. But his team at Mayo Clinic was able to diagnosis and successfully treat his rare condition. Now he's back to doing what he loves.

Michael Rybak is an avid photographer, kayaker, scuba diver and whale watcher who moved to Hawaii from Minnesota six years ago because of his love of the ocean.

The Maui resident is part of a research organization that monitors humpback whale populations. More than 10,000 of these whales fill the waters between Maui and Molokai from December through March to mate, give birth and care for their newborn calves.

"We motor into a designated area, spot whales and do photo identification that will be used for tracking migration and behavioral patterns," Michael says. "At the same time, we do health assessments, particularly looking for entanglement damage from fishing gear and other debris. If we find a whale that's entangled, our team will use the latest whale rescue equipment to free it."

For a time, Michael worried his participation in this important work might end when a mysterious illness led to severely restricted mobility in both of his arms. But thanks to care at Mayo Clinic, Michael has regained his health, and he's excited to be part of the expeditions once again.

Michael began noticing problems with his arms in 2015.

"I went to pay cash at a gas station, and I couldn't take my change with one hand," the retired ad agency creative director says. "That's how restricted my range of motion was. I couldn't rotate my arms."

He went to several doctors and specialists in Hawaii that summer. No one could figure out what was causing his condition, which was accompanied by severe pain. And the skin on his arms and chest had the appearance of an orange peel.

"I got an immediate feeling of confidence from Dr. Mueller. He's got the kind of bedside manner you dream of in a doctor." — Michael Rybak

After two months of waking several times a night from intense pain and worsening stiffness, Michael decided to write a letter to Mayo Clinic. He also sent along several photos of his arms. Less than two weeks later, on Nov. 11, 2015, he flew to Mayo Clinic's Rochester campus for an appointment with Paul Mueller, M.D., in the Department of General Internal Medicine.

"I got an immediate feeling of confidence from Dr. Mueller," Michael says. "He's got the kind of bedside manner you dream of in a doctor."

Pulling together a team of experts

When he saw the photos Michael had sent, Dr. Mueller suspected eosinophilic fasciitis, a condition also known as Shulman's syndrome. It's a rare disorder that causes the skin to thicken and feel like wood. Dr. Mueller consulted with colleagues in the departments of Dermatology and Rheumatology, including Floranne Ernste, M.D., a world-renowned expert in this condition.

"There's inflammation that occurs in the subcutaneous fat, and can extend into the muscle and cause the tissue to become hardened and fibrous, significantly affecting a person's range of motion in their extremities," Dr. Ernste says.

The inflammation is due to an excess of a type of white blood cells, called eosinophils, that fight infections and parasites.

"Getting affirmation from colleagues was really the Mayo Model of Care at its finest." — Paul Mueller, M.D.

In addition to his appointment with Dr. Mueller, Michael had a series of blood tests and imaging exams. He met with a variety of Mayo Clinic specialists, including rheumatologists, dermatologists, hematologists, infectious diseases specialists and cardiologists. After thorough evaluation, the multidisciplinary team confirmed Michael had eosinophilic fasciitis.

"Getting affirmation from colleagues was really the Mayo Model of Care at its finest," Dr. Mueller says. "We help each other out and bring to bear the highest level of diagnostics, and someone who's an expert in the condition treats the patient. That's what differentiates us."

According to Dr. Ernste, a delay in treatment of eosinophilic fasciitis often can result in poor outcomes. "There's a six-month window of time before the skin starts to bind down and scar," she says. Fortunately, Michael arrived at Mayo Clinic just three months after his symptoms started, so there was still time for successful treatment.

Getting on the road to recovery

In December 2015, Michael was given a high dose of glucocorticoids, administered intravenously over three days. Then he began taking oral steroids before returning to Hawaii around Christmas.

"Eosinophils respond very well to steroids, but you want to limit exposure to high-dose steroids because of concern for significant side effects with long-term use," Dr. Ernste says. "We added methotrexate during his January 2016 follow-up to start tapering Mr. Rybak off the steroids."

During that same follow-up visit, dermatologists discussed with Michael a procedure called extracorporeal photopheresis that reduces inflammation in the muscles. The treatment involves removing blood from a patient, spinning it to separate cellular components, and then extracting white blood cells. A photosensitizing medication, called 8-methoxypsoralen, is added to the white blood cells. The cells are then exposed to ultraviolet A light. Afterward, the treated cells are returned to the patient's body.

"Dr. Ernste is very pleasant and articulate. She fills you with confidence that the team of doctors is doing everything they can." — Michael Rybak

Michael would need at least 20 treatments. But under the care of Dr. Ernste and the rest of the team, he was confident in moving forward.

"Dr. Ernste is very pleasant and articulate. She fills you with confidence that the team of doctors is doing everything they can," Michael says. "After assessing all the information, she says, 'OK, I think this would be the best course of action,' and involves you in every treatment decision."

In May and June 2016, Michael had seven weeks of twice-weekly extracorporeal photopheresis. He also had light treatments that helped soften the hardened tissue and increase the mobility in his arms. After a short trip back home, Michael returned to Mayo Clinic for another round of photopheresis treatments over five more weeks.

"By the end of the year, my skin started loosening up a lot," Michael says. "My flexibility came back, and I could move my arms more."

"A year and a half ago, I couldn't paddle a kayak. I couldn't ride a bike, and I couldn't carry anything over 10 pounds," he says. "But by March 2017, the flexibility in my arms was completely improved."

In November 2017, Michael got some great news. His eosinophilic fasciitis was gone.

"It brought tears to my eyes to see how ecstatic he was about learning he was cured," Dr. Ernste says. "When you embark on a journey with a patient that's going to involve long-term treatment, it's very gratifying to see them respond and achieve a full recovery."

From Michael's perspective, the comprehensive team approach at Mayo Clinic made all the difference.

"The whole idea of collaborative medicine is a real point of difference from other hospitals," Michael says. "I'm also so impressed by the dedication of the doctors. They're real problem-solvers. I've never had doctors spend so much time with me. They wouldn't let me leave the office until every question was answered."

Having grown up in Minnesota, this wasn't Michael's first experience at Mayo Clinic. As a young teen, he had been treated at the clinic for a cornea disease.

"I wish I'd gone to Mayo earlier. I don't care if I have to fly 4,000 miles; it is so worth going to Mayo," he says. "You get right to the cause of your symptoms and have the best specialists in the world treating you."