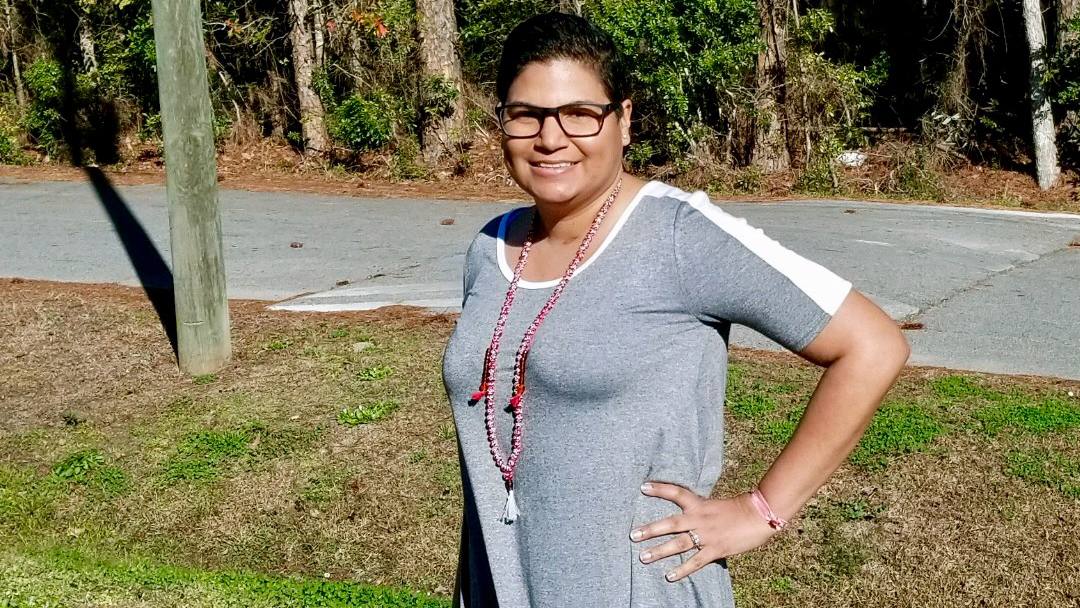 When a viral infection spiraled into a medical emergency that put Michele Asberry's ability to breathe at risk, critical care specialists at Mayo Clinic used cutting-edge technology to save her life.

Michele Asberry is an aerospace medical technician with the U.S. Air Force. When she was stationed in Okinawa, Japan, eight years ago, Michele worked in a neonatal ICU. There she watched her colleagues put a young baby on extracorporeal membrane oxygenation, or ECMO, so the child could be transported back to the United States for treatment.

Extracorporeal membrane oxygenation helps to ensure that the body retains a sufficient supply of oxygen when it can't do so on its own. The device takes over the work of the lungs or the lungs and heart. It involves continuously pumping blood from the body into a machine that removes carbon dioxide and adds oxygen to it. Then the newly oxygenated blood is returned to the body.

When she saw the technology used for that infant in Japan, Michele had no way of knowing she would eventually need it, too. But in 2017, she became seriously ill after she returned from a cruise. And her care team at Mayo Clinic turned to an advanced type of extracorporeal membrane oxygenation for adults that would save her life.

"Our approach to ECMO is multidisciplinary, involving groups such as critical care, cardiothoracic surgery, lung transplant, heart transplant, perfusionists, nurses and respiratory therapists," says John Moss, M.D., the Mayo Clinic critical care physician who oversaw Michele's care. "We have had numerous successful cases that have allowed us to save lives that would not have been saved otherwise."

Michele's illness began with a high fever and an itchy rash that spread from her arms and legs to the rest of her body. On June 30, 2017, she was admitted to an emergency department in Panama City, Florida, where she was stationed. Within a week, Michele started having difficulty breathing. She was diagnosed with acute respiratory distress syndrome and admitted to the ICU.

When doctors tried to do a lymph node biopsy, Michele went into respiratory failure and had to be put on a ventilator. The following day, her military doctors arranged for Michele to be transported to Mayo Clinic's Florida campus, which had the technology to save her life.

"Without ECMO, Mrs. Asberry would not have survived." — John Moss, M.D.

"Doctors at Mayo did a bronchoscopy and determined I had an adenovirus," Michele says. "They administered anti-virals to clear the virus and put me on ECMO."

Mayo Clinic was the first center in Florida to have the latest generation extracorporeal membrane oxygenation technology. It is only one of two hospitals in Northeast Florida that offer it.

"It's only done at select hospitals and allows us to save patients from respiratory failure who would die despite conventional ventilation," Dr. Moss says. "Without ECMO, Mrs. Asberry would not have survived."

Michele also was the first patient at Mayo Clinic's Florida campus to be awake and participating in physical therapy while using the extracorporeal membrane oxygenation.

"ECMO patients are often deeply sedated. Mrs. Asberry was able to be off the ventilator and communicate with her family and health care providers," Dr. Moss says. "She was also able get out of bed to receive physical therapy while waiting for her lungs to recover."

"The doctors were wonderful. You could tell they truly cared about me and my family." — Michele Asberry

The mother of two girls stayed in the ICU for six weeks and then went on to complete three weeks of physical therapy. Although she still has numbness in her left arm and hand due to nerve damage, as well as scars from the various procedures she underwent, Michele says she feels lucky to be alive.

"The doctors were wonderful. You could tell they truly cared about me and my family," she says. "I am most thankful for everything Mayo did for me. They saved my life. I'm thankful for their skill and the experience they have with ECMO and for not giving up on me."