Right-Handed Once More, Thanks to Unique Orthopedic Surgery 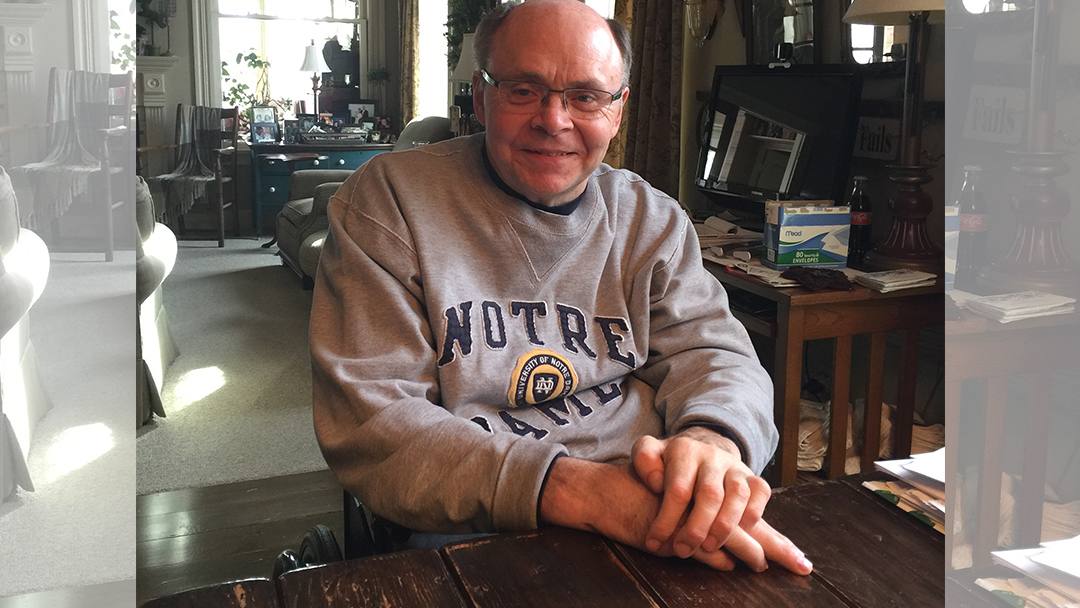 Craig Cretsinger had accepted the fact that he'd never be able to use his right hand — until he learned about a specialized hand surgery at Mayo Clinic.

For 45 years, Craig Cretsinger lived without the use of his right hand. It was the result of a spinal cord injury he'd suffered decades earlier. The 65-year-old had accepted the disability as permanent.

So in 2017, when Craig's Mayo Clinic physician told him there was a possibility his hand function could be restored with a specialized surgery, Craig was elated. His wife, Karen, remembers the moment when Craig received the news from Peter Rhee, D.O., in the Department of Orthopedic Surgery.

"He started crying, and I looked over at him and said, 'What's wrong? Are you in pain?' He said, 'No, I'm so happy. I could have a functioning hand after 45 years,'" Karen says. "He was very excited about it. He even asked Dr. Rhee if he could do it tomorrow."

While Craig didn't get the surgery the next day, in October 2017, he did receive the first of its kind upper extremity reconstruction with Dr. Rhee leading the surgical team. Several months later, Craig could firmly grasp objects with his right hand. Now he also can use that hand to hold a cup, manipulate a fork and perform many everyday tasks most people take for granted.

"For 40 years, he's never been able to shake people's hands. But when I saw him at his three-month mark, I went to shake his hand," says Dr. Rhee. "Before, he would flip his left hand over to shake hands. Now he can use his right hand. It was awesome."

A right-hander by birth, Craig was forced to train his left hand to perform tasks when, at age 19, a motor vehicle accident left him with a spinal cord injury that paralyzed him from the chest down.

"After many, many months of rehab and practice, I could do many things with my left hand: hold a glass, eat, get dressed by myself," says Craig, who lives in Spencer, Iowa.

Undeterred by his physical limitations, Craig filled his life with family, friends, career and volunteerism. He went on regular hunting trips, spent summer vacations at his family's lake home, and enjoyed cruising around with Karen in 1970s-era muscle cars.

Craig's independent spirit helped him manage the physical aspects of his condition, which included transferring himself in and out of his wheelchair several times a day. A few years ago, however, when Craig was moving himself into a dentist's chair, he experienced a sharp pain in the tricep muscle of his left arm. A short time later, during a transfer into his bed, Craig felt a second pop in his left tricep and was unable to extend his elbow.

"At that point, when those tendons and a part of my muscle were torn, I really needed a lot of help," Craig says.

"I asked him if he knew that we could do surgeries on spinal cord-injured patients that can make their hands function again. He said he never knew that it was an option." — Peter Rhee, D.O.

Craig reached out to orthopedic specialist Mark W. Christopherson, M.D., in Mayo Clinic's Department of Physical Medicine and Rehabilitation. Dr. Christopherson told Craig about his colleague Dr. Rhee, who was starting a specialized clinic aimed at returning hand function to paralyzed patients. At Craig's appointment with Dr. Rhee, the physician pointed out that a few of the muscles in Craig's right wrist, which had remained virtually useless through the years, had good strength, and his joints were very flexible. That made him a candidate for reconstructive surgery.

"I asked him if he knew that we could do surgeries on spinal cord-injured patients that can make their hands function again," Dr. Rhee says. "He said he never knew that it was an option."

About 60 percent of the roughly 12,000 individuals who suffer spinal cord injuries in the U.S. each year lose some level of hand function, Dr. Rhee says. "Only about 10 percent of people who are candidates for this surgery have it. That's usually because patients and referring physicians don't know about the potential procedures available to reanimate the hand after a cervical-level spinal cord injury. And most facilities don't have the resources to treat this underserved patient population."

Dr. Rhee, who cared for battle-injured patients during his career as an active-duty hand surgeon in the U.S. Air Force, received his formal training and residency at Mayo Clinic. He was well-versed in upper extremity reconstruction, specifically in patients with peripheral nerve damage. But when tragedy struck his own family, Dr. Rhee's professional interests turned personal.

A family member injured his spinal cord and visited the family afterward. "I was heartbroken to see how his injury had taken away so much of his independence and the ability to perform even the most trivial of tasks," Dr. Rhee says. He was humbled by the young man's courage and strength despite his limitations. "I started doing some research and found that although there's a lot you can do, in the U.S. there are not a lot of places doing them," he says.

Dr. Rhee's enthusiasm for his work was evident, Craig says, the first time they met.

"You can just see it when you learn what he's done and when he visits with you," Craig says. "I trusted him. I believed in him. You could just tell his passion by the way he talked."

After discussing it with Dr. Rhee, Craig decided to move forward with the surgery. During the procedure, Dr. Rhee performed multiple tendon transfers and tendon reconstruction on Craig's right hand, and fused portions of his right thumb.

A few weeks following the first operation, Craig was pinching and grasping objects. Dr. Rhee was not fully satisfied with Craig's level of motion, however, and felt his function could be even better with some minor adjustments.

So Craig had a second operation. This time Dr. Rhee, who had used the concept of "wide-awake hand surgery" during his career in the U.S. Air Force, kept Craig fully awake, but pain-free, during the procedure. That way, Craig could give Dr. Rhee feedback on the positioning of his fingers.

"Dr. Rhee got to a point in the middle of the operation where he asked if I was happy with the way my fingers were bending," Craig says. "He took the surgical sheet down, and I looked at my fingers. They were cut up and laid open, but I could bend my fingers. And I said, 'That's almost there,' so he did a couple more snips, and I said, 'I'm OK with that.'"

"My team and I are committed to providing hope to those who've sustained life-changing injuries." — Peter Rhee, D.O.

The follow-up care patients like Craig receive after surgery is an important part of the holistic approach Mayo Clinic advocates.

"With our Spinal Cord Injury Program, we utilize a mind, body, spirit approach to patient care," Dr. Rhee says. "If I see a spinal cord-injured patient as only an injured hand with a potential for restored function, even if we succeed, we do patients a disservice if we don't address other issues, such as with their bowel or bladder function, pressure sores or even depression. My team and I are committed to providing hope to those who've sustained life-changing injuries."

The surgeries, coupled with strengthening exercises, have improved the function in Craig's right hand to the point that it's almost as good as his left, he says, adding, "I think it will keep improving."

For Craig, the experience he had with Dr. Rhee is emblematic of the care he's received at Mayo Clinic throughout his life.

"Everybody has always gone above and beyond what they need to. They're very personable and explain things to me in layman's terms," Craig says. "They are my go-to people, and I need them."

Watch this brief video to see the results of Craig's hand surgery in restoring his hand function.

Hello, my son who is a KC135 Refueler pilot has been diagnosed with Parsonage Turner Syndrome. It came on about 2 months ago. He is currently using a Tens Unit and undergoing acupuncture. A little improvement. Has Dr. Rhee had any experience working with people suffering from PTS? If not, would you know a place that specializes in the treatment that you could recommend? Thank you! Gail R.

You might also consider joining the group discussion on Parsonage Turner Syndrome, (https://connect.mayoclinic.org/discussion/parsonage-turner-syndrome/?pg=2#comment-87362) on our Mayo Clinic Connect website. You can communicate with others who may have had similar experiences, and you also can read Mayo Clinic expert blogs and take part in educational events.