In 1956, spinal fusion surgery was in its infancy. But the pioneering medicine Joyce Gugler received for scoliosis from her Mayo Clinic orthopedic surgeons at that time set her on the path to a pain-free future.

Even at age 13, Joyce Weisman Gugler knew she was receiving state-of-the-art treatment when, in 1956, she underwent spinal fusion for scoliosis at Mayo Clinic. The procedure corrected the curve in Joyce's spine, allowing her to live a normal childhood and go on to a pain-free adult life. Today she remains active as a realtor in her hometown of Rochester, New York.

"A lot of people go to Mayo Clinic, and a lot of people have success stories. But I think what makes mine a little different is that the surgery is not done the same way today," Joyce says. "I'm not saying the new way is bad. I'm just saying this is a case where the old-fashioned way was extremely successful." 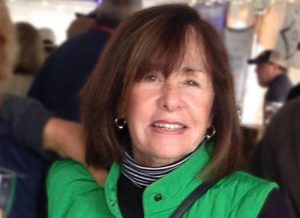 At the time of her scoliosis diagnosis, Joyce lived in Kalamazoo, Michigan. Her parents took her to see orthopedic surgeons in Grand Rapids, Michigan, as well as Chicago and Milwaukee in an attempt to find treatment for Joyce, who suffered severe pain as a result of her spine developing an S-curve.

"All of the doctors would take huge amounts of X-rays, but nobody wanted to do anything. They all wanted to wait," Joyce says. "In retrospect, it was just such a new field, and I think they were afraid."

A family member who had received treatment at Mayo Clinic suggested to Joyce's parents they seek help there. Joyce and her family met with orthopedic surgeon William Bickel, M.D., who was the chief of scoliosis surgery at what is now Mayo Clinic Hospital – Rochester, Saint Marys Campus.

"There was absolutely no hesitation," Joyce says. "He and his staff immediately put me in Saint Marys Hospital. The next day they said I needed to have surgery, and they would do it."

Although spinal fusions were done elsewhere as early as the 1890s, the first recorded case of spinal fusion for scoliosis in the U.S. was in 1914 at New York Orthopedic Hospital. At Mayo Clinic, with the formation of the Department of Orthopedic Surgery in 1910, orthopedic surgeons performed spinal fusions according to the era's best practice.

Even though orthopedic surgeons applied the most technologically advanced methods available at the time, spinal fusions prior to the early 1950s could be "major life events," says A. Noelle Larson, M.D., a Mayo Clinic orthopedic surgeon.

"Imagine being a teenager, separated from your family and friends, and taken to some distant hospital where you're lying in bed in a cast for nine months," says Dr. Larson, who is conducting a 30-year outcome study of spinal fusion patients treated with instrumentation. "Literally, the surgery would be done through a cast. The child was kept in the cast during surgery and then wrapped back up in plaster."

Joyce's memories of her experience mirror the circumstances of many children who underwent those early spinal fusions.

"They put me in traction and put weights around my hips and weights around my collarbone area. I had to lie there like that in the hospital for five days," Joyce says. "They were trying to stretch my spine. It was very painful."

"Literally, the surgery would be done through a cast. The child was kept in the cast during surgery, and then wrapped back up in plaster." — A. Noelle Larson, M.D.

After lying in traction for several days, Joyce was taken to a procedure room where her body was placed in a device that continued straightening her backbone.

"They put this thing around my jawbone and also around my hips. I was on a table, and they literally stretched me," Joyce says. "They were winding it up and little by little, stretching me more and more. When they got to the point where they thought my spine was straight enough, they put a cast on me."

Joyce says her cast extended from her jawbone to her hips and allowed only for movement of her limbs. Her medical team cut a hole in the back of the cast to expose Joyce's spine. At the time of her surgery, bone graft was taken from the front of both of her tibias — the larger of the two bones in the lower leg. Then the bone was cut into pieces and placed between Joyce's thoracic and lumbar vertebrae, bonding her spinal column in place.

Joyce stayed at Saint Marys for about a week after her surgery before her parents could secure transportation home for her.

"Because I was lying flat out straight, and I had to be in that position for six months, there was no easy way to take me home," Joyce says. "My family got a Red Cross plane, so I went in the ambulance plane with a little red cross on it with my mom and dad. We had a hospital bed at my home in Michigan."

Six months after her surgery, Joyce and her parents returned to Mayo Clinic. Her cast was removed, and X-rays were done. Dr. Bickel informed her that her leg bones fused with her vertebrae, holding her spine in a corrected position.

Although Joyce’s fused spine limits the way she can bend over — she cannot arch or bend her back — she says that after all the years of living with it, her condition doesn't affect her day-to-day life.

"When I bend, I don't even think about my back. I bend straight from the hip," she says. "I never think about the fact that I can't do it because that's normal for me."

Through the years, occasional limitations have cropped up. For instance, Joyce says she can't participate in activities that require significant bending, like bowling and yoga. And when she drives, she must turn her entire torso to effectively check her blind spot. But making these accommodations seems to Joyce a small price to pay for the decades of spine health she's enjoyed since her surgery.

"I never had any problems," Joyce says. "I have no back pain. I don't take any pills. Since my back is stiff and straight, I have good posture."

The biggest reminder of her surgery are the scars, one which runs the entire length of her back and two others on her shins that stretch from her knees to her ankles. The full and active life Joyce has wouldn't have been possible if not for the insights and approach of her Mayo Clinic physicians back in the 50s, she says.

"I never had any problems. I have no back pain. I don't take any pills. Since my back is stiff and straight, I have good posture." — Joyce Gugler

"I wanted to reach out to the orthopedic department to say that, in 1956, when what they were doing was still in its infancy, they did a great job," Joyce says.

To be sure, when Joyce had her spinal fusion, orthopedic spine surgeons still were learning the best way to help patients, and the surgical technique has advanced significantly since then, says Dr. Larson.

For modern scoliosis fusion surgery, typically no casts or braces are used. There are no extra incisions for bone grafts. Patients get up the day after surgery and leave the hospital within three to five days. Children return to school in two to three weeks, and they can go back to sports such as basketball and gymnastics within three to six months. In many cases, only part of the spine needs to fused, leaving patients with much more spinal motion and flexibility. Mayo Clinic surgeons also are pursuing surgery for scoliosis that doesn't involve spinal fusion.

"Given the technology available for her at the time, this was a fabulous outcome," Dr. Larson adds.