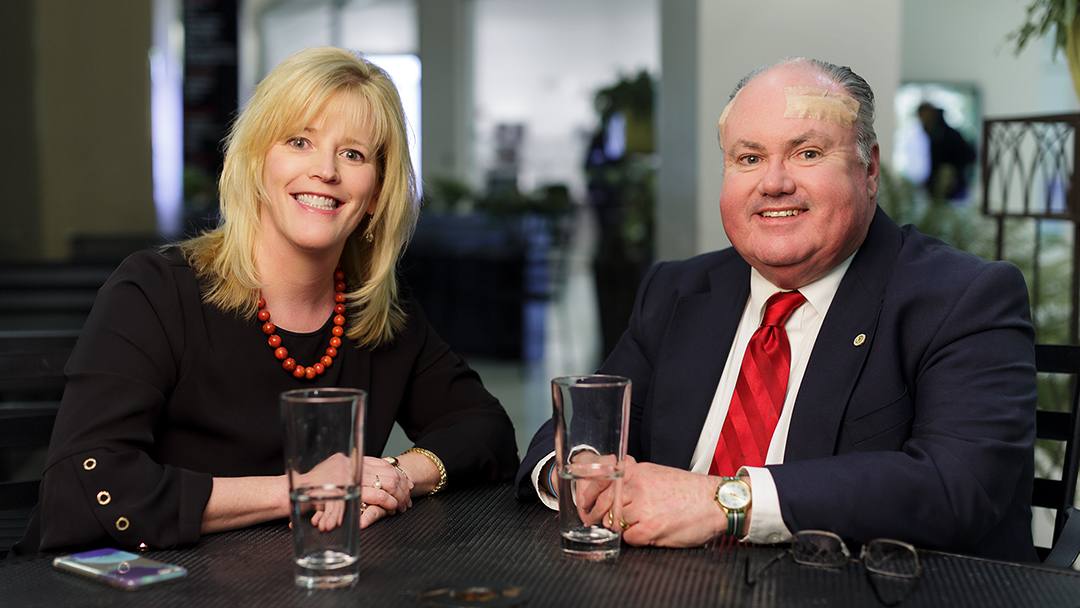 John Murphy, a Mayo Clinic Public Affairs specialist, wasn't expecting his friend and co-worker, Carol Lammers, to remark on an age spot on his forehead, but he's glad she did.

As someone with a family history of melanoma — a dangerous form of skin cancer — John Murphy, who works in Public Affairs for Mayo Clinic, wasted no time when his longtime friend and co-worker, Carol Lammers, pulled him aside after lunch one day and told him an age spot on his forehead looked different.

Carol, who met John 20 years ago on his first day of work at Mayo, knew John's family was particularly affected by melanoma. And although John was diligent about his dermatologic health — he faithfully had a skin check every year — Carol's remark set him on a fast track through diagnosis and treatment of melanoma, which is reported to affect 80,000 new patients each year.

"With this disease, time matters, so it's good to get checked, get checked frequently, and go to the dermatologist if you see a change," John says.

A few days after Carol suggested John seek medical advice, he met with Catherine Newman, M.D., in Mayo's Department of Dermatology. At the appointment, Dr. Newman performed a diagnostic skin biopsy on the lesion. Just a week later, on Jan. 23, 2018, John had surgery to remove a malignancy from his forehead.

"John's tumor was thin, so he has a very good prognosis," Dr. Newman says, adding that he will continue to be followed closely going forward.

When John started working at Mayo Clinic, his office was next to Carol's, and they began grabbing lunch together.

"I've known John for so long. He's a great person, and we're really comfortable with each other as friends," says Carol, who works in Media Support Services at Mayo Clinic. "That's probably why I was more comfortable saying something. I also think being an employee at Mayo makes you more aware of things and maybe a little more willing than the average person to say something."

John said the force with which Carol spoke compelled him to schedule a visit with Dr. Newman as soon as he returned to his office.

"She said to me, 'John, I think that age spot on your face has changed.' And I said, 'Do you really think so?' And she said, 'Yeah, it's a little darker and a little bigger. If I were you, I'd call Dermatology,'" John says. "She did it out of concern. She did it privately. But she said it with enough urgency that it made me call."

"I thought for sure they would say it was nothing, that I was overreacting. … I was just hoping it wasn't melanoma. But I am very grateful it was found." — Carol Lammers

At John's appointment, which was on a Tuesday, Dr. Newman performed a punch biopsy of the skin lesion to send to pathology for evaluation.

"She did it, and put in some stitches. I was asked to come back on Monday to have the stiches taken out," John says. "Dr. Newman said hopefully the pathology report would be back by then."

The following Monday, John's stitches were removed, and as he was walking back to his office, his phone rang.

"It was Dr. Newman. She told me it was, in fact, malignant melanoma," John says. "She scheduled the excision of the tumor for the following morning."

Carol says she was surprised when John shared the news with her.

"I thought for sure they would say it was nothing, that I was overreacting. Or if it was anything, it would be squamous cell cancer. I was just hoping it wasn't melanoma," she says. "But I am very grateful it was found."

Melanomas are more dangerous than basal cell or squamous cell cancers of the skin because they have a higher rate of spread to the lymph nodes and internal organs. But when caught early, most melanomas are highly treatable. Melanomas that rapidly evolve into nodules, start bleeding or increase in thickness are more difficult to treat.

"Tumor thickness is the most important determinant of prognosis, so if you have a thin lesion and you catch it early, it is very treatable," Dr. Newman says.

The treatment for virtually all such melanomas is excision — surgical removal of the cancer. As John went through that procedure, he was put at ease by his medical team's step-by-step explanation of the process.

"They didn't do anything without saying, 'This is what we're going to do next,'" John says. "You felt very cared for because you were kept in the communication loop."

During the excision, the edges, or margins, around the tumor were removed until they were deemed clear of cancerous cells. The incision, which was about 4 inches long, was then closed and bandaged. After 10 days, John removed the bandage and applied prescription ointment to the wound as it healed.

John continues to see his dermatologist every six months to catch any future melanomas that might appear.

People who have been diagnosed with the disease are at greater risk for developing additional lesions. Individuals with fair skin, many moles and a history of sun exposure are also at heightened risk for the condition.

"To have people who are around you — and interested and looking out for you — and to have access to the health care that we have, it makes me really thankful to be at Mayo Clinic." — John Murphy

Looking back, the experience has amplified John's appreciation for being a Mayo Clinic staff member as well as a patient.

"To have people who are around you — and interested and looking out for you — and to have access to the health care that we have, it makes me really thankful to be at Mayo Clinic," he says.

And he will always be thankful for Carol and her encouragement to visit his doctor.

"I of course have thanked her, and she is very thankful as well," John says. "Dr. Newman and my surgeon both said, 'You owe a debt of gratitude to your friend. You really are blessed that your friend said something.' If you see a change in someone, don't be afraid or embarrassed, or feel like you're being nosy, to say something. In my case, it helped save my life."

Thank you for sharing Mr. Murphy's story.
My first introduction to melanoma was over 40 years ago, when my then 30 year old brother in law developed it. He battled it for many years as it traveled through his body. Luckily, each time he was able to have surgery to remove the tumor. He even had brain surgery twice when it landed there. Sadly, when a tumor got entangled in his groin, his journey ended.
My next experience was with my brother. He developed melanoma on his back. I believe it was stage 2. Thankfully, it was all removed and he hasn't had any more signs of melanoma in about 10 years.
My own diagnoses came last May. I was having my annual skin check up. There was a teeny brown dot on my big toe. It looked like all the other spots I have. For some reason I showed it to the doctor. She told me a person my age (62 yo), usually does not get any new beauty marks on areas like the feet. She biopsied it and it was melanoma.
I quickly made an appointment with a surgeon to have it removed. Thankfully, I had clear margins. I was told by the surgeon that this kind of melanoma can be found at or in any orifice.
After the surgery, I made appointments with my gynecologist, dentist, new dermatologist and foot doctor for complete and thorough check-ups. I now see each of them every 6 months to make sure there are no changes. I see my dermatologist next week for my 1 year check up.
I live in Florida, so my daily habits have changed. Each day I use a product with an SPF of 30 on my exposed skin, including my face.