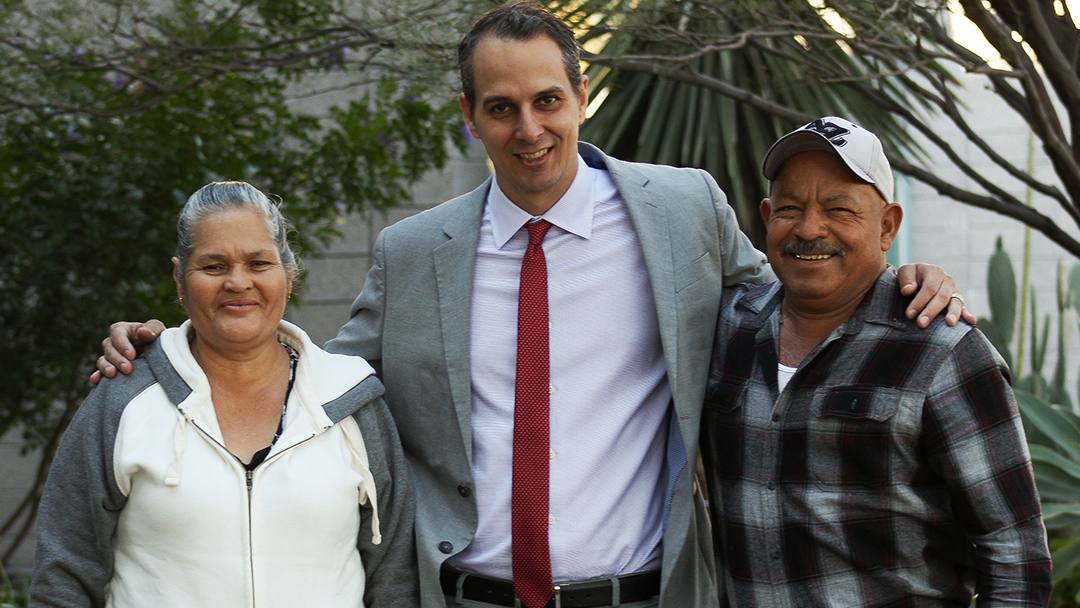 After enduring kidney dialysis for years, a conversation Martin Ruiz Zermeño had at his dialysis center with Mayo Clinic social worker Jeffrey Welch paved the way to a successful kidney transplant.

Martin Ruiz Zermeño's home was melancholy. "When you don't feel well, there's sadness at home," he says. Stealing joy from Martin's life was kidney disease that required him to receive dialysis three times a week at a dialysis center in Glendale, Arizona.

The father of seven, a truck driver from Phoenix, says he is proud of the breadwinner status he holds for his family. When he was ill, he felt like he was letting them down. "I would come home exhausted from dialysis, and I would just go to bed," he says. Martin also worried that he wouldn't be around for his family much longer. "At times, I thought I was going to the other side," he says. "I thought I was dying."

That changed profoundly for Martin and his family, when in June 2017, he met Jeffrey Welch, a social worker in Care Management at Mayo Clinic's Arizona campus. The meeting put Martin on the path to a successful kidney transplant, freeing him to live a healthier life untethered by dialysis.

"This was my best outcome, coming to this hospital," Martin says.

Martin and Welch connected during one of the "lobby days" events Welch conducts at numerous dialysis centers in Arizona. During lobby days, Welch — who is fluent in Spanish — meets with Hispanic patients requiring dialysis who express interest in learning more about kidney transplants.

The events are part of a research study launched in January 2017 by the Mayo Clinic Hispanic Transplant Program. The study is designed to reach Hispanic communities to discuss the potential for kidney transplantation for people experiencing end-stage renal disease.

The Mayo Clinic Hispanic Transplant Program is modeled after the Northwestern Hispanic Transplant Program, working within the framework of Mayo's program in Arizona. The study is funded by a grant from the National Institutes of Health. A key part of the program is education about the transplant process and the role of the patient and the family, while being mindful of delivering culturally competent care.

When Welch and Martin met on June 20, 2017, Martin communicated his interest in the program. "Jeff opened the doors for me at Mayo Clinic," Martin says.

"Thanks to Jeff and everyone else at Mayo Clinic, I'm so grateful." — Martin Ruiz Zermeño

In October, Martin, his wife, Maria, and one of their children attended education classes at Mayo to learn more about the transplant process. "Everything was explained to me," Martin says, adding that he was more than ready to be evaluated for a kidney transplant.

Martin passed his clinical evaluations. On Dec. 19, he was approved for a transplant and placed on the waiting list for a donor kidney. He was prepared for a long wait. To his delight, and that of his family, the wait was short. Less than a week later, on Christmas Eve, Martin received a healthy new kidney.

Martin recalls that night vividly. "When the call came, they said: 'Guess what? We have a kidney for you,'" he says. "I never believed it would be so quick. I wondered if it was really true or who was really calling. Thanks to Jeff and everyone else at Mayo Clinic, I'm so grateful."

Welch continues to host lobby days at dialysis centers throughout Phoenix and Tucson, Arizona, and he often receives feedback that the service is clearly needed. One patient in Tucson revealed to Welch that he had been on dialysis for 11 years and had never received firsthand information about a kidney transplant until talking with Welch.

Of meeting Martin and the subsequent success he had with his transplant, Welch says he's pleased Martin was "very motivated toward transplant and had a supportive family environment."

Julieta Delgado, a clinical research coordinator at Mayo Clinic, also worked with Martin, and recalls that he told her, "Every step of this transplant process was exactly as described, from day one," referring especially to the Spanish translation education.

Since his transplant, Martin has left dialysis behind and returned to his job driving a truck. He started out slowly at three days a week, but he's eager to work longer days.

"I like the freedom to travel, not being on dialysis," he says.

Reflecting on his transplant experience, Martin says now that he knows what's involved, he would like his kids to think about being living donors to someone in need of a kidney. "After what I've gone through, I think it's something I would like for them to consider."

And he's extremely grateful for the generosity of his own kidney donor, expressing interest in someday meeting the donor's family.