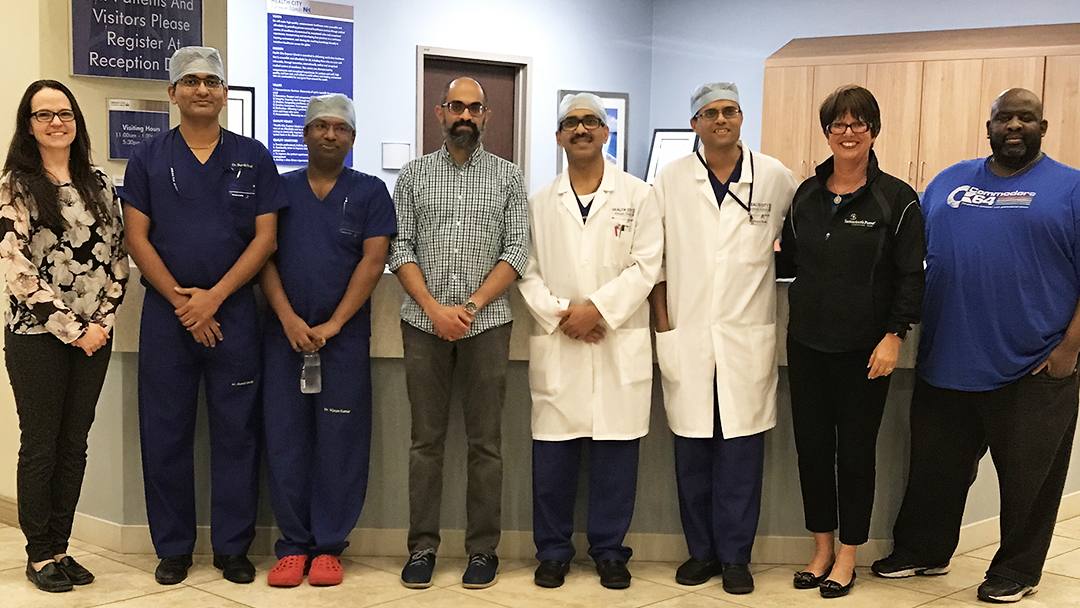 When a Mayo Clinic surgical team learned that a child tethered to life support in a foreign country would die in a matter of days without their help, they quickly planned a multifaceted intervention.

Every day patients from around the world fly to visit Mayo Clinic and receive lifesaving care. This past March, as part of a special collaboration, it was a surgical team from Mayo Clinic boarding a plane. Their mission: deliver vital care in the Caribbean to save the life of a critically ill infant.

The trip was made possible through a collaboration between Mayo Clinic and the Children's Heart Project — an international relief organization that arranges heart surgeries for children through physicians who donate their time. Mayo Clinic's three-member team, headed by Karthik Balakrishnan, M.D., a pediatric airway surgeon in Otorhinolaryngology, journeyed from Rochester, Minnesota, to the Cayman Islands. They performed an emergency tracheal reconstruction on a baby who had initially been brought to the hospital for surgery to repair heart defects.

While Mayo Clinic has provided international patients with charity care in highly complex and unique circumstances at its campuses in the U.S., this mission was unprecedented.

"This urgent, zip-in, zip-out trip — where we perform a lifesaving operation, an extremely complex operation, on a child with a rare condition — is extremely rare, even at Mayo Clinic," Dr. Balakrishnan says.

When Children's Heart Project first alerted Mayo Clinic about the child, efforts were made to fly the baby to Mayo Clinic's Rochester campus for the surgery. But the child's fragile condition deteriorated further, and she became too unstable to transport.

"The child was basically dying. By the time we found out that it wouldn't work to bring her here, we had just a couple of days to figure out what to do," Dr. Balakrishnan says. "When we came up with a viable alternative, there was no hesitation."

The baby had been born with two congenital heart defects. The Children's Heart Project took on her case and brought her to Health City Cayman Islands. Once she was there, cardiac surgeons quickly realized the baby had more than heart problems.

Not only was her heart malformed, the child's entire trachea had severe stenosis that narrowed to a 2-millimeter funnel at the bottom. As a result, following her heart surgery, the baby began experiencing respiratory failure and required life support in the form of extra corporeal membrane oxygenation, or ECMO.

"There was no way for her to get off of ECMO," Dr. Balakrishnan says. "And it was beginning to cause more trouble because the breathing tube in her airway didn't fit correctly and was damaging her trachea."

Planning for all possibilities

When the patient's Cayman Island physicians realized that further intervention was required to heal her, the Children's Heart Project reached out to Mayo Clinic. The operation needed to save the child, called a slide tracheoplasty, is uncommon. Even at Mayo Clinic, it's usually performed only once or twice a year, according to Dr. Balakrishnan.

"We take the entire trachea apart and rearrange the cartilage of the trachea to make it twice as wide and half as long," he says.

Because Dr. Balakrishnan and his surgical team — which included Christopher McGriff, a surgical technologist, and Carrie Gossman, a registered nurse — had performed the procedure in the past, they knew the preparations they had to make in the three days they had leading up to the trip.

"It's a challenge to go into a different environment where you're not sure what they're going to have and what the environment is going to be like there. But the team there was wonderful to work with." — Carrie Gossman

Part of Gossman's job was communicating with the Cayman Islands' team to determine what equipment was already in place and what needed to be shipped.

"It's a challenge to go into a different environment where you're not sure what they're going to have and what the environment is going to be like there," Gossman says. "But the team there was wonderful to work with."

"There were emails flying all over the place," McGriff says. "It was a little crazy trying to get everything together. Our managers were very helpful in making sure we had everything as far as the paperwork that we had to take care of."

Making a quick, but critical, trip

Despite being initially surprised at Dr. Balakrishnan's request that they travel on such short notice, both McGriff and Gossman were all in for the trip.

"I remember coming in on Wednesday, and Dr. Balakrishnan saying, 'Hey, I know this is short notice, but can you go this weekend?'" McGriff says. "And I said, 'What? What happened to going in a few weeks?' He explained what had happened. I was like, 'Yeah, I can go!'"

Gossman says as soon as she learned the trip was to be expedited, she jumped at the chance to participate.

"I've always wanted to do a mission trip. But it was just something I thought I'd do once my children are grown," Gossman says. "This one was very short-lived and specific, but it helped fulfill that bucket list item of mine. It was really amazing to be a part of it, and I'm very grateful that my co-workers and managers here were willing and able to help make it possible for us."

"It wasn't just us. It was the many people that were behind the scenes trying to make things work, so we could get there and do what we needed to do." — Christopher McGriff

The Mayo Clinic trio departed Minnesota on the morning of March 24. When they arrived at Health City, they got to work. With the support of Gossman and McGriff, in addition to Health City medical personnel, Dr. Balakrishnan performed the surgery in collaboration with Health City's chief cardiovascular surgeon. They reconstructed the baby's trachea, widening it from an inner diameter of 2 millimeters to 6 millimeters. The normal tracheal diameter of an infant should measure about 5.5 millimeters.

McGriff says that the cooperation of their entire surgical unit to accommodate the traveling clinicians, as well as Mayo Clinic supportive leadership, was crucial to the trip's success.

"It just goes to show the power of teamwork," McGriff says. "It wasn't just us. It was the many people that were behind the scenes trying to make things work so we could get there and do what we needed to do. We all knew what we were there to do, and we all just focused on that."

"If I say the needs of the patient come first … then this shows me that if someone comes up with a creative way to serve a patient, then the department and institution will get behind us and back us." — Karthik Balakrishnan, M.D.

Concentrating on delivering the best possible care in this type of critical situation speaks to the core of Mayo Clinic's mission, not only at its locations in the U.S., but around the world, says Dr. Balakrishnan.

"If I say the needs of the patient come first, and if we say we're here to serve the patient in every way possible, then this shows me that if someone comes up with a creative way to serve a patient, then the department and institution will get behind us and back us," he says. "And they did it really quickly, which shows me that Mayo Clinic's the sort of institution that will be a sort of last hope for patients. Everyone on every level did that. It permeated the organization and culture."