Skier Back on Track After Knee Surgeries 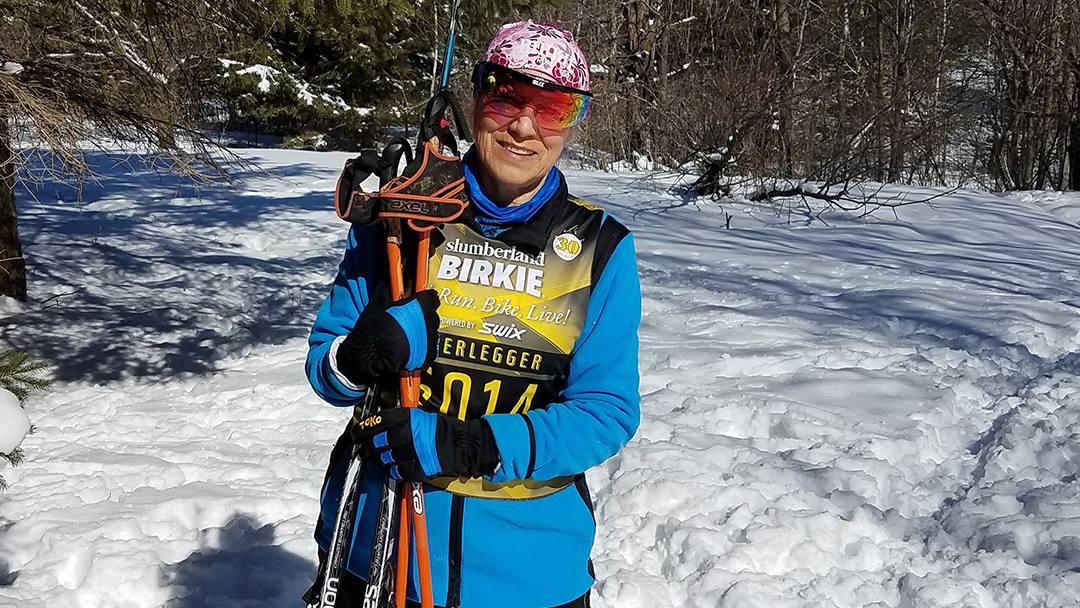 Multiple knee problems threatened Marva Sahs' ability to take part in the outdoor recreation she loves. But Marva and her Mayo Clinic care team were determined that her injuries would not sideline her. Today she's back to being active in the great outdoors.

It's hard to keep Marva Sahs down. The 69-year-old resident of rural Spooner, Wisconsin, completed her 30th American Birkebeiner, a 50-kilometer cross-country ski race, this past winter. This would be impressive under any conditions, but Marva has twice come back from knee surgery to take on the challenge.

"If you want to complain, winter in Wisconsin can be pretty hard," Marva says. "If you want to get out and do things, it's pretty fun. I could never just sit inside."

Marva's fun involves year-round outdoor activity on skis in the winter and a bike in the summer.

Marva had her first knee injury in 2007 when her enthusiastic dog crashed into her right knee. Suffering a meniscus tear and damage to the medial collateral ligament, Marva had to cross the 2008 Birkebeiner off her list. But she wasn't ready to give up on skiing. Marva went to see Andrew Israel, M.D., an orthopedic surgeon at Mayo Clinic Health System in Eau Claire, Wisconsin.

"Marva was not only a great a patient, she was committed to her rehab after surgery," Dr. Israel says. "She put in all the work needed to continue at that level."

Marva was back on her skis by March 2008 and competed in the 2009 Birkebeiner. Her second injury came a few years later. While skiing far back in the woods on a cold day in 2012, Marva found herself in a scary situation.

"It was a beautiful day, and there were sparkling diamonds in the snow," Marva says. "I was not paying attention to where I was going and fell forward going down a hill. My left leg helicoptered with that extra leverage of a ski on it."

When she tried to stand, her left leg would not support her weight.

"I was a mile and a half back in the woods," Marva says. "It was 12 to 15 degrees out. I was wearing skinny clothes for skiing — not for the cold — and I was sweaty. My mittens were wet, and I couldn't stand up. I was thinking I needed to figure out how to get out of here."

Marva was wearing a knee brace on her right knee, which she switched to her left. It gave her enough support to shuffle out to the road where she encountered another skier.

"I never thought that I wouldn't get back out there. And Dr. Israel was right there with me. He said: 'I'll fix that. I'll get you back.'"

After getting a ride to her car, Marva managed to drive herself home. The next day, she knew just who to call: Dr. Israel. When she returned to the Sports Medicine Department, Marva said, "Hi, everyone. It's me again."

This time, she had suffered damage to her ACL and meniscus. She also had a hairline fracture at the top of the tibia.

Marva says despite her harrowing adventure in the frozen woods, she still was eager to return to skiing.

"I never thought that I wouldn't get back out there," Marva says. "And Dr. Israel was right there with me. He said: 'I'll fix that. I'll get you back.'"

To return to the skate style of skiing Marva prefers for racing, she needed to have her ACL repaired.

"For any activities that include cutting and pivoting motions, athletes need their ACL to be able to trust their knee," Dr. Israel says. "My goal was to help Marva get back to what she liked to do."

Dr. Israel says he knew Marva had her sights set on being back in the Birkebeiner within a year. He says it's good to have that type of goal and set realistic expectations. Then athletes need to put in the effort in rehabilitation see positive results.

With her goal firmly in mind, Marva says she was motivated to follow her rehabilitation routine with Craig Kann, a physical therapist.

"Whether you're a high school, competitive or recreational athlete — or you play lunchtime basketball three times a week — we want to get you back to doing what you like to do at a high level."

"Craig was amazing," says Marva. "He taught me when to push through the pain and when not to. You've got to do what you're told. If you don't, you're sabotaging yourself."

While Marva says she's now a little more cautious on the trails, she is back to skiing regularly. She made it to the 2013 Birkebeiner and completed her 30th competition in the race in 2018. She hopes others might be inspired by her story to get outdoors and stay active.

Dr. Israel says people should not let physical setbacks prevent them from doing something they enjoy.

"We work to keep people doing the things they like to do recreationally," Dr. Israel says. "Whether you're a high school, competitive or recreational athlete — or you play lunchtime basketball three times a week — we want to get you back to doing what you like to do at a high level."

As she reflects on her experience, Marva is pleased she had Dr. Israel and his care team to help get her back into action. "I'm very happy with the result," she says. "Dr. Israel really does exceptional work. The team is really upbeat and professional."