Living in the Present, Grateful for Life 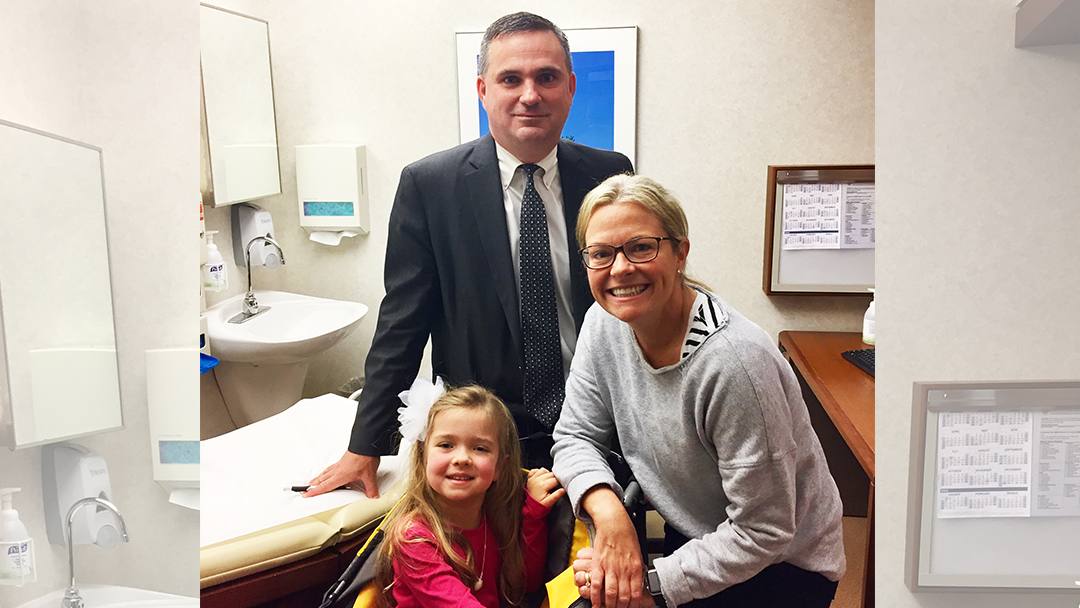 On the trip home from a Mayo Clinic appointment in January, where Kellie Leasure had received the news that metastatic breast cancer had again spread to her brain, "The Warrior" by Patty Smyth came on the radio. Kellie turned up the volume and belted out the lyrics.

"Shooting at the walls of heartache, bang, bang. I am the warrior," she sang. It's a battle cry for Kellie, who has been fighting metastatic breast cancer for five years and has overcome unrelenting obstacles in her quest to survive.

At the appointment, Kellie learned that cancer, which already had invaded several organs and fractured her bones, had made a return appearance in her brain. For the second time, she would need stereotactic radiosurgery. But for all the trauma and pain Kellie's experienced, the 48-year-old mother of four refuses to give in to despair.

"Although I've been smacked in the face with my mortality, I choose not to look at it that way," Kellie says. "It's an opportunity for me to grab my faith, operate in joy and live the best life I can live."

Kellie was diagnosed with breast cancer in June 2013. At Mayo Clinic's Rochester campus, the Cedar Falls, Iowa, resident found the care team she credits with keeping her afloat. Their care and attention has supported Kellie through numerous surgeries, dozens of rounds of radiation therapy and chemotherapy, and cutting-edge therapies to manage her life-threatening condition.

"Metastatic disease, once you're diagnosed with it, it's a roller coaster that you can't get off of. But Mayo Clinic has slowed that ride down, and I am so grateful for them," Kellie says.

Kellie already had gone through a double mastectomy and the removal of several cancerous lymph nodes — in addition to chemotherapy and radiation therapy — when she learned from her physicians in Iowa that her breast cancer had spread.

"The scans showed massive metastatic disease in my bones, my spine, my ribs. The tumors were so big they fractured my bones," Kellie says. "That's when I jumped ship and went to Mayo."

In February 2014, Kellie called Mayo Clinic's appointment line and was scheduled for a visit with Timothy Hobday, M.D., in Medical Oncology.

"My first day at Mayo left me in awe. I walked in and they had all of my records, my pathology, my scans. It was as if I was the only patient they had treated that day," Kellie says. "It was so amazing because no one was going to let me go until they had answers for me."

"Nobody can maintain positivity all the time, but [Kellie has] been amazingly, strongly, persistently positive in her life. The positive attitude has allowed her and her family to try and continue to live as full and normal a life as possible." — Timothy Hobday, M.D.

As he's worked with Kellie, Dr. Hobday has witnessed firsthand her warrior spirit.

"She's just the definition of resilient, handling both the physical and emotional suffering through this process," Dr. Hobday says. "Nobody can maintain positivity all the time, but she's been amazingly, strongly, persistently positive in her life. The positive attitude has allowed her and her family to try and continue to live as full and normal a life as possible."

Kellie's positivity and enthusiasm about her Mayo Clinic experiences often spread, including to other young women who share her diagnosis.

"She's been an incredible mentor. She has connected with other young women living with metastatic breast cancer throughout the Midwest," Dr. Hobday says. "Some of them have come here as well, seeking care here though her mentorship, experience and their interactions with her. In addition, she has made anonymous contributions of encouragement and is a treasure to other women and families dealing with breast cancer."

For more than a year after meeting Dr. Hobday and developing a treatment plan, Kellie went on with life, for the most part, as usual. She managed her household, cared for her children and ran regularly. But in October 2015, Kellie had an MRI that showed a tumor in her brain. She was referred to Ian Parney, M.D., Ph.D., in Neurosurgery. In November, she underwent stereotactic radiosurgery on her brain to halt the tumor's growth.

The next year brought an onslaught of additional health problems. In March 2016, Kellie was diagnosed with a pulmonary embolism. In April, cancerous lesions were found in her kidney. By fall, Kellie's breast cancer had spread to her left femur and spine, causing debilitating pain. Kellie says she was fearful about what the pain might signify and hid her extreme discomfort until her suffering drove her to the emergency department.

"By the summer of 2016, I think that receiving care at Mayo Clinic really paid off for Kellie because we were rapidly able to include on her team physicians in Radiology, Orthopedic Surgery, Neurosurgery and Radiation Oncology," Dr. Hobday says. "Working closely with all of these specialists, we were able to figure things out and wisely and quickly intervene."

Kellie was prescribed anti-coagulant injections and oral blood thinners to treat the embolism. Her kidney tumors, which were unrelated to the breast cancer, were treated with cryoablation therapy. And for her bone issues, she was referred to Peter Rose, M.D., in Orthopedic Surgery, and Michelle Clarke, M.D., in Neurosurgery.

"She has metastatic breast cancer to her spine, and the two things we do are ensure her spinal cord doesn't get compressed, so there are no spinal cord injuries, and stabilize her spine," Dr. Clarke says.

In September, Kellie underwent spinal decompression surgery that took pressure off of her spinal cord while reinforcing the area weakened by cancer. The surgery was followed up with radiation therapy. The evening of her spine surgery, Kellie was able to stand up and walk without pain for the first time in more than a year.

"Kellie has set out her goals very clearly, and that makes it so much easier to treat her. It feels like we move together as a team." — Michelle Clarke, M.D.

At approximately the same time Kellie was learning of Dr. Clarke's strategy to ease her back pain, Dr. Rose was developing a surgical plan to support Kellie's leg. Kellie's cancer had dissolved the calcium matrix of her femur, which put the bone at risk of breaking, Dr. Rose says, adding that when bones break in areas where cancer is present, the likelihood of healing is extremely low.

"It's far better to have a pre-emptive strike and try to fix the bone before it breaks, so it never breaks," Dr. Rose says.

Kellie's young age and active lifestyle motivated her team to treat her in a way to support that lifestyle. To that end, a titanium rod that spans the length of her femur was implanted into her thigh.

"This minimized the risk that she's going to have a fracture around that area and also keeps her with her own hip joint," Dr. Rose adds.

Kellie says a month after her femur was repaired, she enjoyed a 10-mile bike ride. It's proof, she says, that the aggressive treatment she insists her team provide to her meets her expectations.

"Kellie has set out her goals very clearly, and that makes it so much easier to treat her," Dr. Clarke says. "It feels like we move together as a team."

Despite all the bad news Kellie received in 2016, there was a bright spot. Her cancer had become HER2-positive. This kind of breast cancer tests positive for a protein called human epidermal growth factor receptor 2, or HER2, which promotes the growth of cancer cells.

"The HER2 discovery opened up a whole new spectrum of very tolerable and very effective treatments that target the HER2 gene overexpression," Dr. Hobday says. "It allows us to kill the cancer cells through medicines that block the HER2 receptor and its downstream effects in the breast cancer cells."

But that positive step forward was tempered by more bad news. The cancer had invaded her liver. "I was absolutely devastated," Kellie says. "I sat in the room with my husband and Dr. Hobday and cried."

Throughout 2017, Kellie returned to Mayo Clinic every three weeks to receive chemotherapy and monitor her liver. The liver cancer, which was identified as being genetically different from the breast cancer, also was biopsied as part of a research trial to determine its genetics.

"Kellie readily volunteered to participate in a Mayo Clinic Cancer Center research effort where her tumor tissue is being tested for hundreds of genes that may be under- or overexpressed in the cancer to try to see if there are further insights into therapies that might be helpful to her," Dr. Hobday says.

"I feel so blessed that I have the opportunity to be on the cutting edge of possible new treatments for women with metastatic disease." — Kellie Leasure

Kellie still receives chemotherapy and radiation therapy to push back at the tumors that continue to develop.

"I don't even ask anymore where it is," Kellie says. "I let my doctors manage it. It's not humanly possible to follow the changes. I stay in today and am confident in my team captain, Dr. Hobday."

Kellie knows that for as long as she's alive, her future will involve cancer treatments. But she remains hopeful that genetic testing will reveal the best course for that treatment.

"I feel so blessed that I have the opportunity to be on the cutting edge of possible new treatments for women with metastatic disease," Kellie says.

Her family is relocating to Rochester this summer to be closer to her medical family — a group she's quick to praise.

"There are miracles that happen at Mayo Clinic, and I believe they happen all the time," Kellie says. "I think everyone who works at this clinic, their philosophy is making the world a better place because they're being all that they can be to each and every patient. If it weren't for the doctors and team at Mayo Clinic, I honestly do not believe I would be alive."

Watch this video to hear more about Kellie's story:

Hello Kellie and Mayo-
I have metastatic bc. This article really gave me hope that a future exists for me and helped me to understand that I need to see this as a marathon versus a sprint to better manage the day-to-day. Thank you Kellie, I hope and pray you are well.
LeeAnne