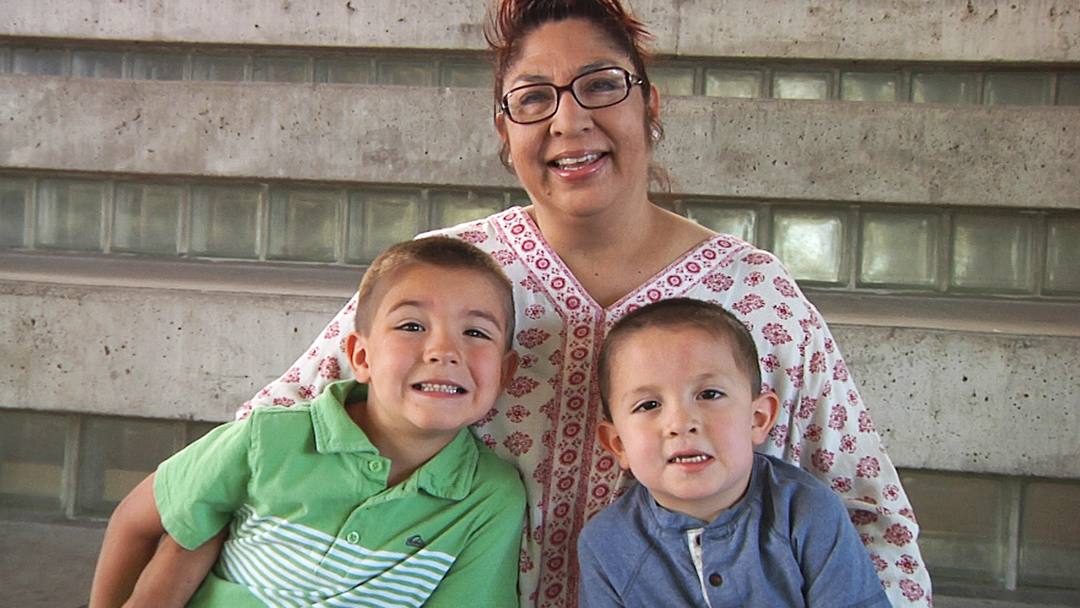 Diagnosed with an aggressive form of breast cancer, Elena Blevins worked with providers at Phoenix Indian Medical Center and Mayo Clinic through a collaboration that provides patients with comprehensive cancer care.

Elena Blevins spends much of her time caring for others. Her career as an aide takes her into the homes of elderly individuals, where she cooks, cleans and runs errands for those who have trouble taking care of themselves. Elena also cares for her elderly mother.

"I like to help others. That's me in a nutshell," says Elena, who also is the mom of two grown children and grandmother to two young boys.

Six years ago, after discovering a lump on her right breast as she was getting dressed, Elena was forced to put herself first. But it took her some time. "At first I thought it was cyst," she says. She initially dismissed the lump as she focused on her job and family. After several months, she became increasingly tired. And the lump appeared to get larger and harder.

"We were able to facilitate a mammogram rather quickly and referred Elena to our Breast Clinic," says Timothy Mathews, a family nurse practitioner for the Oncology Centers of Excellence at Phoenix Indian Medical Center. "A biopsy was taken. It came back as triple-negative breast cancer."

Triple-negative breast cancer is an aggressive form of the disease that often is challenging to treat. Elena was at work when she learned the news.

"I hung up the phone and finished up my shift," she says. "I don't know how I was able to maintain it. I had maybe another half hour to go until my shift was over. I didn't tell my client anything. I told her, 'I will see you tomorrow.'"

Elena burst into tears once she got into her car.

When she arrived home, she told her daughter first. Then she sat down with her son, who was only 12 at the time. Friends and family started arriving at her home as the news spread. "Everyone was crying," Elena says. "It was very traumatic."

"It's a collaborative effort. You have four or five oncologists looking at a patient's medical case and deciding what's the best treatment option." — Timothy Mathews

Back at Phoenix Indian Medical Center, Mathews put Elena's medical case on the docket to discuss at his oncology team's weekly conference call with counterparts at Mayo Clinic's Arizona campus.

"Our mission for our patients here at the Phoenix Indian Medical Center is to provide excellent medical care but at the same time look at the patients' individual needs and cultural needs, as well," Dr. Tillman says.

"Triple negative is a form of breast cancer in which there is no expression of estrogen receptor, no expression of progesterone receptor and no overexpression of the HER2 [human epidermal growth factor receptor 2] protein," he explains. "Because none of these proteins are expressed in the cancer, we are lacking specific targets for that type of cancer."

The Mayo Clinic and Phoenix Indian Medical Center teams felt Elena would be a good candidate for a clinical trial at Mayo as part of her overall treatment plan.

"It's a collaborative effort. You have four or five oncologists looking at a patient's medical case and deciding what's the best treatment option," Mathews says. "You have a lot of great minds looking at the case."

Elena recalls that her care team explained to her that she qualified to be part of a clinical trial and what it would entail. She liked the fact participating in a clinical trial potentially could help other women with this type of cancer.

"It was a true blessing to have people care about me so much. It was a huge team. It was like a big family." — Elena Blevins

"I thought if I could help people and the clinical trial could help me, it was a win-win," she says. So Elena continued her cancer treatment at Mayo Clinic's Arizona campus and was enrolled into the Breast Cancer Genome Guided Therapy, or BEAUTY, study which was sponsored by the Mayo Clinic Center for Individualized Medicine.

"The BEAUTY trial employed a very sophisticated genetic and molecular analysis to help us understand the nature of Elena's cancer and make a better plan for her treatment," says Dr. Northfelt, one of the researchers on the trial.

As part of her treatment protocol, Elena received several months of preoperative chemotherapy, and it shrank her tumor. Then Elena had a lumpectomy at Mayo Clinic, performed by surgeon Richard Gray, M.D., who was also a researcher on the clinical trial. The area of the original tumor was removed and lymph nodes were extracted from her armpit for testing.

"We were grateful at the time of her surgery to find out all the cancer had disappeared from her breast, which was our goal and our hope," Dr. Northfelt says. Elena then received conventional postoperative whole-breast radiation therapy to complete her care.

Elena has been cancer-free for more than five years. She credits her strong faith and the support of her family and friends for helping her get through. She's thankful that she had access to the clinical trial and is grateful to her care teams at Mayo Clinic and Phoenix Indian Medical Center.

"It was a true blessing to have people care about me so much," Elena says of having two care teams. "It was a huge team. It was like a big family."

Learn more about Elena's story in this video: