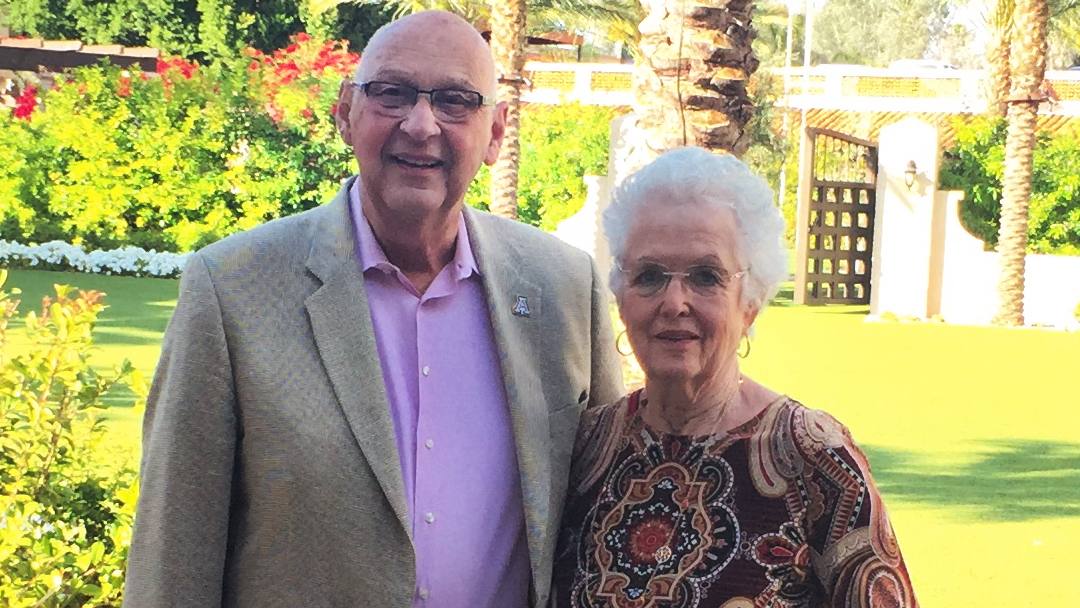 When a lump on his neck turned out to be cancer, Lee Dueringer and his care team at Mayo Clinic embarked on a comprehensive treatment plan that quelled the disease without significantly disrupting his life.

A suspicious lump that appeared on his neck in August 2017 was the first sign that anything was amiss for Lee Dueringer, an otherwise healthy and energetic 77-year-old from Phoenix.

"I discovered the lump while shaving," he says. "I felt the other side of my neck, and it was fine. I knew enough to think, 'Uh-oh, a lump. Not good.'"

That discovery, his instincts about health issues, and his motivation to get checked out at Mayo Clinic set Lee on a quick path to answers.

At Mayo Clinic's Arizona campus, Lee met with his primary care physician, who advised that the lump should be biopsied. Lee readily agreed because he suspected cancer. It turned out that he was spot on in his self-evaluation. A biopsy revealed the offending lump to be cancer of the parotid salivary gland.

That finding triggered prompt treatment, including surgery and proton beam therapy, which had minimal impact on Lee's daily life but produced excellent results.

The first step in treatment took place on Sept. 7, 2017, when Lee had surgery to remove the cancer. "Let's get that out of there," Lee announced, with his physicians in full agreement.

Lee marvels at the skill of his Mayo Clinic surgeon, who worked to preserve essential nerves while removing the tumor. That's enabled Lee to continue to speak clearly and retain small but important movements, such as being able to smile and wink. The surgery also preserved his taste buds.

After surgery, Lee's care team recommended proton beam therapy to complete his cancer treatment. Lee was relieved when he found out he was a candidate for the therapy. "I knew all about proton beam and that Mayo was tops in that area," he says. "That was to my advantage."

"I knew all about proton beam and that Mayo was tops in that area. That was to my advantage."

The plan was for Lee to undergo 30 proton beam treatments, which would take him through Thanksgiving and beyond. The treatment went smoothly, and he was pleased that it had little effect on his work life.

Lee, who is director of the Career Center at the University of Arizona's College of Agriculture and Life Sciences, works with students regarding career possibilities and internships. "I grew up on a farm in Illinois. It's in my genes," he says.

Although Lee does much of his work in Phoenix, where has lived with his wife, Jill, since 1995, he also makes regular trips to the university's offices in Tucson, Arizona. During his cancer treatment, Lee's days would begin early, with the proton beam sessions scheduled to allow him enough time for his work in both Phoenix and Tucson.

"During my entire treatments, I never missed a day of work," Lee says, adding that his friends were surprised and impressed. "I had two days off for Thanksgiving, and they just tacked those two days onto the end of my treatment."

As he went through proton beam therapy, Lee took it in stride, joking with the staff and calling himself, "Mr. Trouble." The staff, in turn, bought into Lee's "trouble" moniker and made a mock name badge for him, labeled "Mr. Trouble," which he cherishes. "The badge didn't open any doors at Mayo, of course," Lee says.

Although he denies causing any real trouble, Lee did enjoy shaking things up a bit. With the patient alone in the treatment area during proton beam therapy, a staff member usually turns on music to break up the silence. "They turned on Beethoven's Fifth or something," Lee says. "I ordered Elvis."

Reflecting on this treatment now, he has no complaints. Lee says each day brought him a new reason to make the most of the experience, to stay positive and to appreciate the care he received.

Lee recalls the end of his proton beam treatment regimen as bittersweet. He was on the road to recovery, but he knew he would miss his team. He appreciated his care — and the caring staff. To show his gratitude, on the last day of treatment in December, Lee purchased three trays of sandwiches and brought them in for the staff.

Now Lee is happy to share his story with others. In March 2018, he was invited to be on a panel at the annual meeting of the National Association for Proton Therapy Conference in Scottsdale, Arizona, where he told the story of his journey through proton beam therapy.

Since his treatment ended, Lee's follow-up appointments at Mayo Clinic have been good. "My scans reveal no bad actors left," he says. In part, he credits his outcome with being in the right place at the right time, going to Mayo Clinic to address his health issue, and his positive attitude. Jill Dueringer confirms that her husband is "the poster boy for feeling good and being positive."

An example of his ability to look on the bright side is Lee's perspective on a peculiar side effect from his cancer treatment. "I have no whiskers on that one side of my face," he says. "But I'm saving on shaving cream."