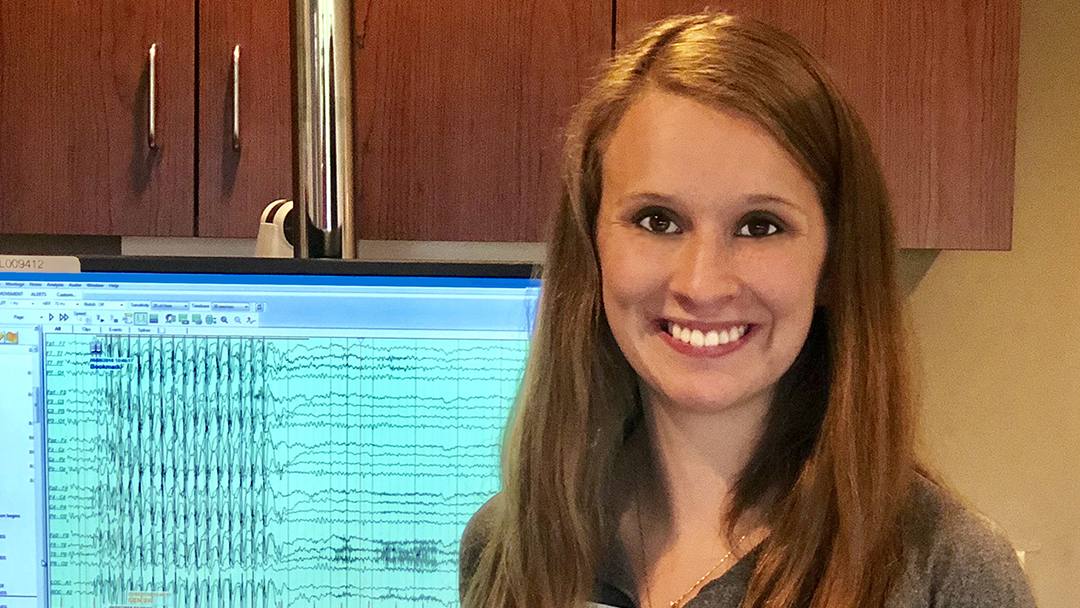 Kelly Daniels tried to control her seizures with medications. But the drugs were ineffective, and they left her feeling disoriented. Then she turned to Mayo Clinic, where she had brain surgery that stopped the seizures and put her life back on track.

For a long time, seizures were a regular part of Kelly Daniels' life. They began when she was in her teens and persisted for years, despite taking multiple medications in an effort to calm them. The seizures upset Kelly's daily routines and hampered her ability to be self-sufficient.

Coping with the seizures as well as she could, Kelly eventually began a career as an electroencephalogram technologist — a health care professional who administers tests that detect electrical activity in the brain. As part of her work, Kelly was involved in the care of epilepsy patients. That gave her a better understanding of her own condition, and her workplace became Kelly's pathway to the surgery that would finally free her from seizures.

Two of Kelly's co-workers who'd studied at Mayo Clinic encouraged her to go there for care. Kelly took that advice and today, thanks to the epilepsy surgery she had at Mayo Clinic, she's seizure-free. She describes it as "the best decision I have ever made."

Kelly had her first seizure several months before graduating from high school in Gresham, Wisconsin.

"I was on my high school basketball team and hit my head on the basketball court during the last game of the season," Kelly recalls. "Three days later, I went for a run and had a generalized tonic-clonic seizure. I had no idea it happened. The next thing I remember was a bunch of people surrounding me in someone's yard."

The following week, after Kelly had another seizure, a local neurologist diagnosed her with epilepsy. Kelly tried several medications over the next few years. None controlled her seizures, and many had side effects. They made Kelly feel drowsy, slowed her thinking, caused her to have tremors and affected her sleep. As a result, she says she had a hard time in college.

"I had severe memory issues. I would study for hours and not remember anything," Kelly says. "I was having weekly seizures, and people had to drive me around because I didn't have my license."

In addition to being unresponsive to medication, Kelly's epilepsy was complicated further by the fact that her seizures came with no warning. In some people, seizures are preceded by unusual sensations, called auras. Auras serve as a signal that a seizure is coming. Kelly didn't have auras, making her condition all the more unsettling.

"When I had a seizure, I was unaware of it," Kelly says. "People who were with me would notice because I would do random things that did not fit the situation. They also noted that I did not respond when people would interact with me or ask me questions."

In 2016, after being evaluated by three neurologists, it became clear that surgery was the only alternative for Kelly. Wanting to learn more about her surgical options so she could regain her independence and have a better quality of life, she went to Mayo Clinic's Rochester campus.

"Dr. Cascino took his time and was very good with answering questions."

During a consultation in January 2017, neurologist Gregory Cascino, M.D., reviewed Kelly's case and discussed with her the option of a temporal lobectomy — a type of epilepsy surgery that removes part of the temporal lobe of the brain, where Kelly's seizures originated. A series of tests — including an EEG, MRI, CT scan and a Wada test — were used to help determine if Kelly was a good candidate for the surgery.

"About two-thirds of patients have seizure disorders that respond to anti-epileptic drugs, but one-third may continue to have seizures, despite receiving medications," Dr. Cascino says. "After a comprehensive epilepsy evaluation, we determined the best chance of being seizure-free was for Kelly to undergo surgery."

Kelly was pleased with the evaluation and ready to move forward. "Dr. Cascino took his time and was very good with answering questions," she says.

On March 13, 2017, W. Richard Marsh, M.D., a Mayo Clinic neurosurgeon, performed a left anterior temporal lobectomy on Kelly. It involved removing the portions of the temporal lobe that were abnormal on the MRI Kelly had before the surgery. Electroencephalogram recordings were used during the surgery to guide the procedure.

The surgery was a success, and Kelly hasn't had a seizure since. Now she takes only one anti-epileptic drug, and she may be able to discontinue that medication in the future. To monitor her condition over time, she has annual follow-up evaluations.

With the improvement in her health, other parts of Kelly's life have taken a turn for the better, too.

"The purpose of surgery is not just to render a patient seizure-free, but to improve his or her quality of life."

"I have regained my short-term memory, and I can drive. I love being independent," Kelly says. "I'm much more energetic and happier."

Instead of being distracted by seizures, Kelly's now excited about the new adventures coming her way as she gets ready to move and start a new job. That kind of enthusiasm for life is just what Dr. Cascino and the rest of Kelly's multidisciplinary care team hoped to achieve.

"The purpose of surgery is not just to render a patient seizure-free, but to improve his or her quality of life," Dr. Cascino says. "Not being afraid of having a seizure, having the freedom to drive — these factors can have a substantial improvement on a patient's well-being and allow them to become participating and productive members of society. This is very gratifying."