Surviving and Thriving Against All Odds 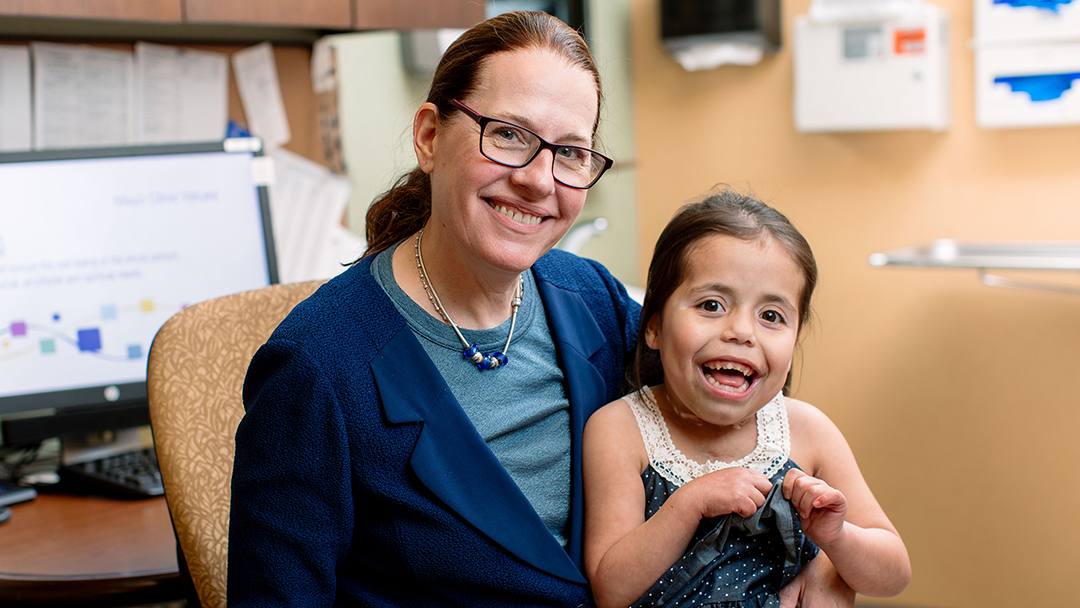 Time and again, 5-year-old Aaliya Lopez has pulled through life-threatening medical crises, and thanks to ongoing medical support, the future she faces now is as wide open as her smile.

In her heart, Beverly Brumm knew it was not her daughter Aaliya's time to go. The 22-month-old — who'd already survived slim odds as an infant born with a complex heart defect — lay connected to life-support machines at Mayo Clinic Hospital — Rochester. With Aaliya in a medically induced coma following a brain hemorrhage, Aaliya's Mayo Clinic care team needed to know how Beverly wanted them to proceed.

"Everyone was talking to me about the quality of life she would have if she survived this," Beverly says. At the time, the long-term outlook for Aaliya's health seemed grim. But Beverly was not ready to let her daughter go. Beverly's faith and her confidence in the healing power of medicine compelled her to direct Aaliya's care team to maximize the girl's odds of recovering. Today, Aaliya's infectious smile and curious eyes validate her mother's conviction that her long-haired, happy daughter is supposed to be here.

"It felt like everyone was putting their arms around us and giving us a great big hug," Beverly says of how the little girl's providers rallied around them. The compassionate care that followed amazed Beverly then, and it continues to astonish her as Aaliya, now 5, is supported through her ongoing medical issues.

"I think they really love her," she says of her daughter's caregivers. "I hope that when Aaliya graduates from high school we can invite her doctors, so they can see how far she's come with their help."

Beverly and Aaliya’s father, Marvin Lopez, who live in Postville, Iowa, learned Beverly was pregnant with Aaliya in May 2012. Beverly, who a few years earlier experienced a pregnancy that did not result in a live birth, requested that her prenatal care be provided at a Mayo Clinic. That turned out to be an important decision.

At Mayo Clinic's Rochester campus, ultrasound testing revealed Aaliya had tetralogy of Fallot. The rare condition is caused by four defects, including holes in the wall separating the heart's ventricles, or lower chambers; a narrow pulmonary valve; misplacement of the aorta; and thickening of the right ventricular wall.

"It was pretty bad. The condition is rare in itself, and they informed us Aaliya had a severe case because her pulmonary valve was absent," Beverly says. "The right side of her heart was four times larger than it was supposed to be. It took up almost her entire chest."

Given the severity of Aaliya's condition, Beverly, then five months pregnant, began visiting Mayo Clinic for frequent appointments. In early January 2013, with Aaliya's condition worsening and Beverly's care team concerned about the risk of early labor, she moved into a hotel in Rochester close to the hospital.

"The love and everything that Mayo has given us is just amazing. Everybody was there to help my little girl."

After giving birth, Beverly got a quick look at Aaliya before the newborn was taken for open-heart surgery. Beverly recalls a chaplain, who the family requested attend the birth to deliver the anointing of the sick, approached her. "She said to me, 'Beverly, did you count how many people are in her operating room? There are 37 people in here.' They were ready for anything and everything."

During the open-heart surgery, surgeons from the Department of Pediatric Cardiology reconstructed the faulty valve and two holes in Aaliya's heart. But as a result of the defect, Aaliya's heart had grown so large that the child experienced cardiac distress when surgeons attempted to close her chest.

"They had to leave her open," Beverly says. "They sort of wrapped her up with plastic wrap, and her nurse covered Aaliya with a washcloth," Beverly says. "She was so small, 5 pounds, 15 ounces, that the washcloth covered her whole body."

Although it was heart-wrenching to see their daughter vulnerable and exposed, the overriding emotion for her parents was gratitude.

"The love and everything that Mayo has given us is just amazing," Beverly says. "Everybody was there to help my little girl."

During the surgery, Aaliya received a breathing tube and breathing support via a ventilator. In the first five days, with her chest open and her team taking every precaution to keep her chest cavity clean, Aaliya was given life-supporting extracorporeal membrane oxygenation. When Aaliya's heart returned to a more natural size, her chest was closed.

After Aaliya had spent a month on the ventilator with the breathing tube, her team determined her airway was malformed. Shelagh Cofer, M.D., from Mayo's Department of Otorhinolaryngology, performed a surgical procedure to create a hole, called a tracheostomy, through the front of the neck and into the windpipe, or trachea, to help with breathing. Aaliya’s breathing tube was removed, and the ventilator was connected to the tracheostomy. With her child no longer connected to the mouth tube, Beverly could finally hold Aaliya — nearly six weeks after she was born.

Aaliya and Beverly remained at Mayo Clinic until late September, when the baby finally was discharged.

"Mayo Clinic has been great, absolutely amazing, not only with my daughter, but with so many other children we've met on the way."

Just before her first birthday, Aaliya, who remained on breathing support, suffered a major setback when she experienced episodes of oxygen desaturation in her blood. Following an ambulance ride from their local hospital to Rochester, Aaliya was seen by a Mayo Clinic medical team that determined her heart's pulmonary valve, which earlier had been fitted with a conduit to keep it functioning correctly, had narrowed by half. Aaliya's surgical team expanded the conduit. That allowed more oxygen to reach her blood.

As the family weathered the ups and downs of Aaliyah's health issues, they were buoyed by the support they received from the little girl's Mayo care team.

"We've been through the wringer, and this is a huge reason why we wanted to share her story. We wanted to give other families hope," Beverly says. "Mayo Clinic has been great, absolutely amazing, not only with my daughter, but with so many other children we've met on the way."

Home again, Aaliya failed to hit developmental milestones and additional complications ensued. Her head grew large, and imaging indicated that Aaliya had developed hydrocephalus, a condition that occurs when spinal fluid builds up in cavities deep within the brain.

In mid-December 2014, to help the fluid drain, Aaliya's neurosurgical team placed a shunt in Aaliya's brain. The day after the shunting procedure, however, Aaliya's fontanel, which had yet to close, was swollen and hard to the touch. Aaliya was rushed to the operating room where her skull was reopened. Neurosurgeon David Daniels, M.D., Ph.D., discovered that Aaliya's excess fluid had drained too quickly, and he immediately removed the shunt.

As a result of the fluid loss, Aaliya's brain tissues had become displaced and collapsed. That caused Aaliya to develop an acute brain bleed, Dr. Daniels says. The night after the shunt removal surgery was touch and go.

"They didn't expect she would survive," Beverly says. "It was one of three different times we didn't think she would make it through the night."

"We stopped the medication on a Monday. Christmas Eve was on a Thursday, and it was Thursday that she woke up."

Aaliya held on. But two days after the brain hemorrhage, she began to experience seizures. "They tried a ton of medicine, but she started seizing really badly. The last one lasted four to five hours," says Beverly, adding that Aaliya suffered multiple strokes as a result of the ordeal.

Out of options, Aaliya's team told Beverly she had two choices. "They said, 'We can let her go, or we can put her into a medically induced coma.' We opted for the coma."

After being comatose for five days, Aaliya was taken off the medicine that kept her unconscious, and Beverly began praying for a change. "We stopped the medication on a Monday. Christmas Eve was on a Thursday, and it was Thursday that she woke up." 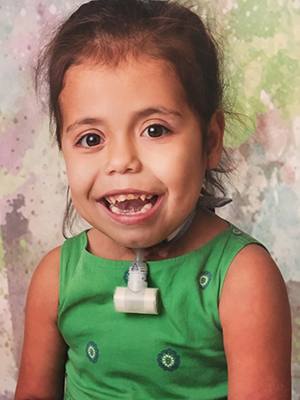 As the week went on, Aaliya seemed to become more awake, but her gaze remained fixed.

When one of Aaliya's doctors was present with the family, Beverly snapped her fingers in front of Aaliya's face, with no reaction. "I said to the doctor, 'I don't think she can see.' Then I snapped my fingers by her ears to see if she would turn her face, and she didn't, so I told the doctor that I didn't think she could hear either."

A visit to an ophthalmologist and audiologist confirmed that Aaliya had lost her sight and hearing. Whether other aspects of Aaliya's functioning had been compromised or whether she'd ever be able to walk or talk were yet to be determined.

"It was just unknown. She was very, very sick," Dr. Cofer says. "Based on how severely ill she was, I was shocked that she made the recovery she has."

In time, Aaliya regained her sight and hearing. In addition, with her mother's support and years of physical and occupational therapy, Aaliya has learned to eat, talk, walk, run, sing and play like other kids. She attended preschool, and this fall will begin homeschooling with her mom.

"Aaliya's was an acute injury. But kids are resilient, and they have the ability to heal themselves," Dr. Daniels says. "Because she was taken care of quickly and managed in a timely fashion, she did really well."

As Aaliya continued to develop, she outgrew the need for her feeding tube. In November 2017, Dr. Cofer performed a tracheal reconstruction surgery that allowed for the removal of the tracheostomy, which had been in place for more than four years. While Aaliya will continue to require interventions to make sure her heart works properly, including a third open-heart surgery in October, her mother has set no limitations on what's possible.

"Her mom was there the whole time by her bedside. She's just an amazing support for her daughter, and she never, ever gave up hope."

"You look at her now, and she runs and jumps, and you can't tell that she's had multiple strokes," Beverly says. "When you think about becoming a mom, you never imagine this. But you love them. Aaliya has taught me to love in a special way that I would not have known if not for her. I love Aaliya so much, so I've tried to be the best mom for her I could and do what I could to help her."

Indeed, Aaliya's many successes can be attributed in large part to Beverly's unceasing advocacy.

"Her mom was there the whole time by her bedside," Dr. Cofer says. "She's just an amazing support for her daughter, and she never, ever gave up hope."

Aalyia was amazing in VBS this past week. Would like to see in Sunday School this fall.