Improving Lives With Creativity and Kindness 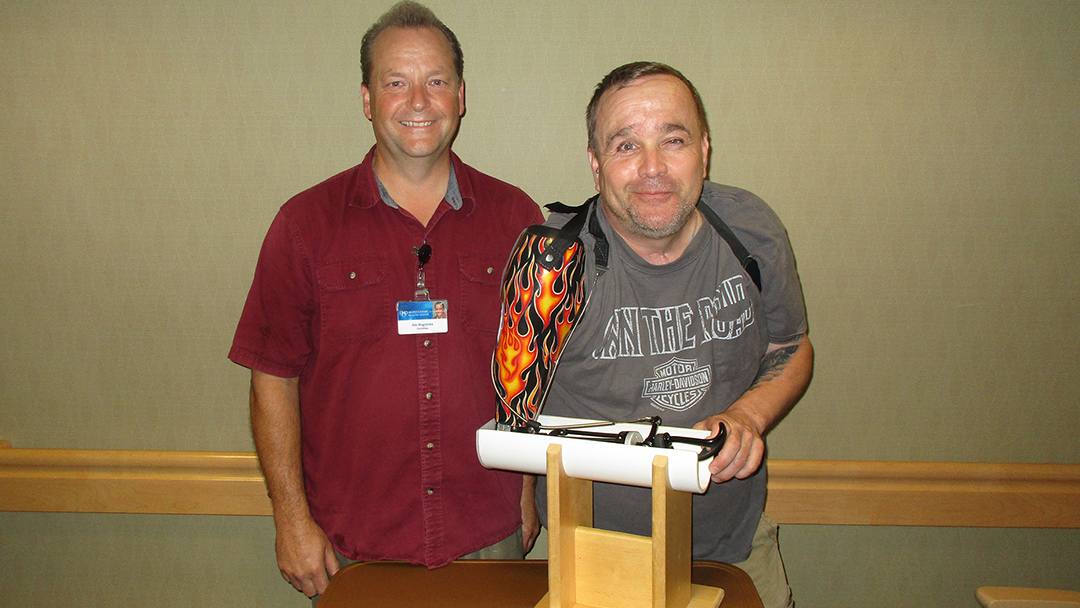 As a child, when Jim Rogotzke wanted a toy or device that didn't exist, he'd make it. Today the master electrician has turned that talent toward designing and developing devices to help patients.

In the heart of rural Minnesota at Mayo Clinic Health System in Springfield, when a specialty object needs to be made, master electrician Jim Rogotzke is the person to call.

Rogotzke uses his engineering savvy to construct items as part of his official job responsibilities managing the southwestern Minnesota facility's electrical and mechanical systems. But he also uses his talents to create devices beyond his normal workaday world — items that have greatly improved the quality of life for several patients.

"In rural Minnesota, we just don't have medical stores across the street to get these things. In some cases, maybe they're not even made," says Melissa Wegscheid, an occupational therapist. "So we've learned here in Springfield how to meet our patients' needs." Sometimes that means a call to Jim.

Rogotzke has been building objects for use in the facility for years. One of the first devices he made was a weight sled for the Physical Therapy Department. At the time, the item sold for more than $800, Rogotzke says. "I built it from materials that cost $75."

A few years ago, when Wegscheid asked him to build a part for a patient struggling to get into his prosthetic leg, Rogotzke didn't hesitate to help. Since then, Rogotzke has helped a patient with a prosthetic arm, too.

"I see what they're going through, and I can't imagine going through it as positively as they are," Rogotzke says. "It makes me feel good that I can help them out in such a positive way."

The first time Wegscheid called on Rogotzke's expertise for Occupational Therapy was to create a set of stairs for pediatric patients that could be taken apart and converted into a chair and desk. She took photos of an adult-sized assembly and showed them to Rogotzke.

"The tools and adaptive equipment I had available for therapy were just not working, so I went to Jim, and I said, 'This is what I need the item to do.' He said, 'Oh, yeah, we can do this,' and he made it," Wegscheid says.

Rogotzke has always had a knack for design. Growing up, he would build his own toys when he wanted something that wasn't made. "I picture things in my head and make them," he says. "I just lucked out to have that."

About two years ago, Rogotzke received the first request to help with a prosthetic. He applied his skills to develop a support device for a patient who, as a result of a stroke, had only one functioning hand and was struggling to affix his artificial leg.

"It makes me feel good that I can help them out in such a positive way."

"For him to get into his prosthetic limb, he needed the support," Rogotzke says. "He could put the prosthetic into the brace that I built and then use his single hand to pull it together and roll the prosthetic sock over his leg."

Before starting the project, he and the patient discussed the issue and what might be helpful. Based on that conversation, Rogotzke built the leg brace. He presented it to the patient, watched the patient use it and then asked for feedback.

"With the leg support, I made it a little long," Rogotzke says. "But I wanted it that way because it's easier to shorten it than to make it longer."

The brace worked, and the patient was pleased to have the device. 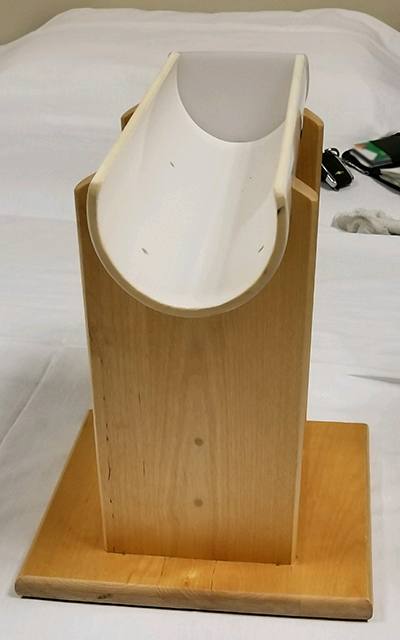 More recently, Rogotzke was called to help another patient who has having problems attaching his prosthetic limb. James Vannoordt received his prosthetic arm in 2017. But from the get-go, he had issues putting it on because he had to simultaneously hold the prosthetic in place while securing it with one hand.

James even resorted to using a clothes hanger to correctly affix the artificial limb. "I was putting it on one day when Melissa was there, and she said, 'Oh my. I can't believe you have to go through all of this,'" James says, adding that he was prepared to return the prosthetic because of the effort it took to get into it.

After witnessing James strain to get into his artificial arm, Wegscheid called Rogotzke. She filled him in on what James needed, and Rogotzke got to work. A short time later, James was presented with a brace that lets him get into his prosthetic in less than two minutes. Made out of wood and PVC piping, the brace holds James' artificial limb steady so he can push his arm into it and connect the parts.

"I have a lot of appreciation for Jim. He's a good guy. He has a big heart, and he wants to help people."

"He came up with the idea of how to make something for me, and it turned out terrific," James says. "It helped a whole lot. I have a lot of appreciation for Jim. He's a good guy. He has a big heart, and he wants to help people."

Both patients have demonstrated for Rogotzke the way they use the supports he built for them. Watching how adept the patients are at maneuvering their prosthetic limbs gives the work he's done all the more meaning.

"Both of these guys, you can just see the appreciation in their eyes," Rogotzke says. "I just can't believe how something I did can make their lives so much better."