Getting Bob Back on His Feet 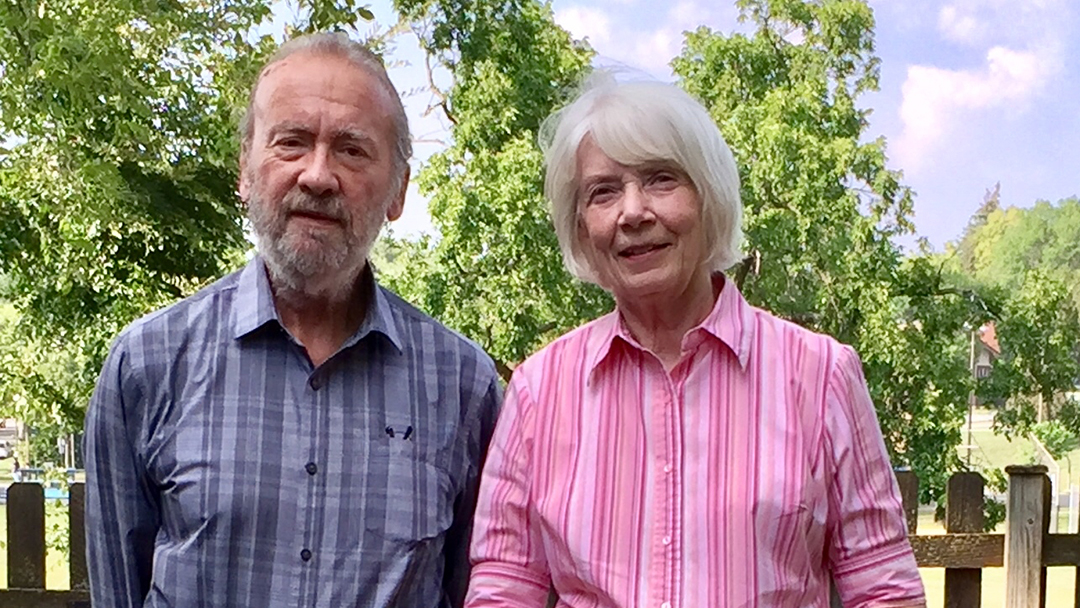 Diagnosis and treatment of normal pressure hydrocephalus for Robert Richter meant the difference between being confined to a wheelchair and being able to actively enjoy his life.

Members of Robert Richter's extended family were excited to see him on his feet and walking unassisted at the annual family picnic in early August.

"They went through Bob's downhill slide and not knowing what was going on with him right along with us," says Kathleen Richter, Bob's wife of 50 years. "Everyone was delighted to see him doing so well."

Bob's slide began last fall when the 74-year old Minneapolis resident was having trouble walking and getting up from a chair. He also had problems with his balance.

A local neurologist diagnosed Bob with spinal cord compression, also called spinal stenosis, and he had cervical spine surgery in November 2017. After that, his family was confident he would get better. But within a month, Bob was walking with a cane and, shortly thereafter, a walker. By January, Bob was confined to a wheelchair, no longer able to walk on his own. The decline was upsetting, and the couple wasn't sure what to do. They decided they needed another medical opinion.

"We didn't know what to make of it, and then you start to think, 'Do we move from our 100-year old house, which has a bathroom upstairs? Do we need assisted living?'" Kathleen says. "My family had had many good experiences at Mayo Clinic in Rochester, so we went there."

After careful evaluation, Bob's care team was able to identify the source of his disability. In addition to the spinal stenosis, there was another underlying problem. A brain MRI revealed the fluid-filled chambers, or ventricles, in Bob's brain were enlarged due to an accumulation of extra cerebrospinal fluid. The care team performed a high-volume spinal tap to drain the fluid. They then confirmed a diagnosis of normal pressure hydrocephalus. Although the fluid pressure in Bob's brain was normal, the enlarged ventricles were disrupting nearby brain tissue and affecting his brain function.

After Bob's diagnosis, his care team referred him to Mayo Clinic neurosurgeon Benjamin Elder, M.D., Ph.D. According to Dr. Elder, there are no clear risk factors for normal pressure hydrocephalus. The median age at diagnosis is the mid-70s.

"There are studies that suggest normal pressure hydrocephalus affects up to 3 percent of people above age 65."

"No one knows what causes it, but it's thought to be the result of an obstruction somewhere along the passage ways of the brain that drain cerebrospinal fluid," Dr. Elder says. "There are studies that suggest normal pressure hydrocephalus affects up to 3 percent of people above age 65."

The disorder is characterized by a triad of symptoms, including issues with gait, cognitive abnormalities, such as short-term memory loss, and urinary incontinence.

"About 70 percent of patients have all three of these symptoms, and 85 percent have two," Dr. Elder says.

For many people who have normal pressure hydrocephalus, treatment is available. In Bob's case, a surgical procedure could help relieve his symptoms.

"If the patient sees improvement from the high-volume spinal tap, then he or she is potentially a candidate for implanting a ventriculoperitoneal shunt in the brain to drain the fluid," Dr. Elder says. "There is about an 80 percent chance of improvement after shunting, particularly with gait problems."

Bob had an hour-long surgery to place the shunt on March 5. The procedure involves drilling a hole in the skull about the size of a dime and placing a rubber tube through the brain into the space where the spinal fluid circulates.

"That tube connects to a valve sitting behind the ear, which regulates the flow of spinal fluid and is connected to another rubber tube that runs down to the abdomen and drains the fluid into the peritoneum, the smooth, transparent membrane that lines the cavity of the abdomen," Dr. Elder says. "The body then reabsorbs all the extra fluid."

After surgery, Bob had six weeks of inpatient and outpatient rehabilitation, as well as occupational therapy. His transformation during that time was extraordinary for the Richters.

"We saw changes right away. Now he can walk the dog with me, and we can go out into the world. It's a complete turnaround," Kathleen says. "We didn't know what we were dealing with because no one seemed to have an answer. Getting those answers and having such a wonderful recovery … for us, it's a miracle."

"We didn't know what we were dealing with because no one seemed to have an answer. Getting those answers and having such a wonderful recovery … for us, it's a miracle."

"That's why it's critical for primary care providers and neurologists to consider normal pressure hydrocephalus as a possible diagnosis," Dr. Elder says. "Many patients report symptoms for more than two years before receiving a diagnosis, and they can be so debilitated during that time. You need to look at the MRI and special cognitive testing that neurologists or neuropsychologists perform. If a patient has the cognitive issues but not gait issues, they likely don't have hydrocephalus."

Bob’s case was complicated by the fact that he had spinal stenosis and hydrocephalus, both of which cause balance and gait issues. Dr. Elder, who does research on normal pressure hydrocephalus, plans to begin a study later this year to monitor the outcomes of patients with this condition and examine whether there is any association with spinal cord compression.

From Bob's perspective, the difference in his daily life before and after his diagnosis and surgery has been remarkable.

"This is a huge change from being in a wheelchair," Bob says. "I'm 90 percent better than I was. And though I still have some issues with balance, I can walk unaided."

Now that his diagnosis, treatment and rehabilitation are behind him, and he's regained the strength in his legs and much of his balance, Bob is looking forward to resuming his three weekly workouts at the YMCA with his wife.

"I'm quite grateful for the skill and knowledge of the doctors who treated me at Mayo," Bob says.