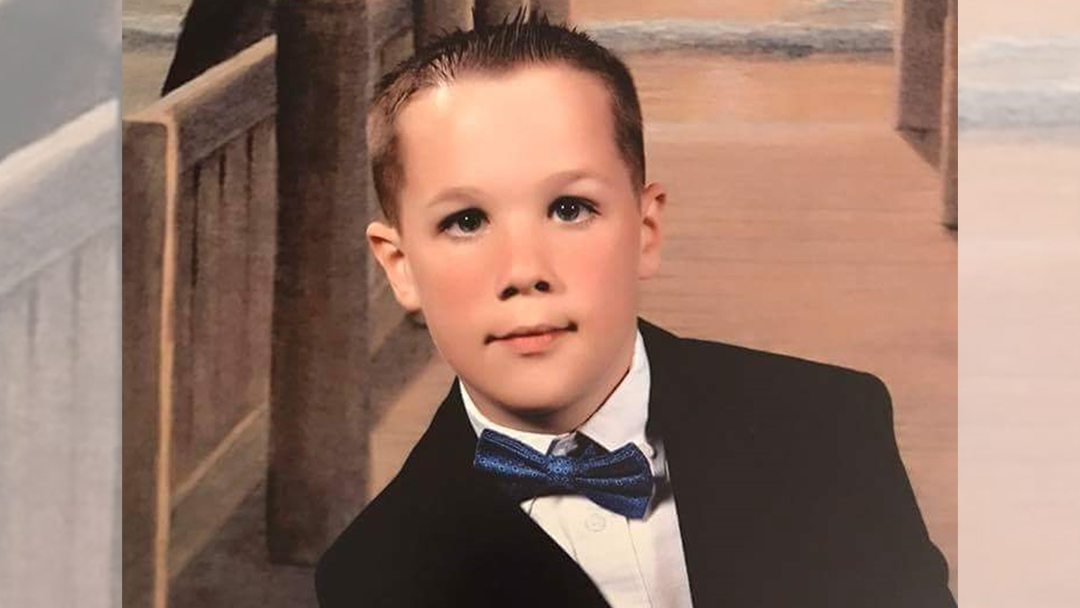 For Knox Rhinehart, who had been plagued by chronic vomiting for years, eating was a torment to be avoided — until he met a Mayo Clinic specialist who understood that treating Knox meant treating his fear.

When 11-year-old George "Knox" Rhinehart arrived at Mayo Clinic last year, his diet consisted of seven foods: purple grapes, strawberries, oranges, tomatoes, white potatoes, rice and pork. They were the only foods that wouldn't trigger symptoms related to his eosinophilic esophagitis — a chronic immune system disease that occurs when food allergies or reflux cause a buildup of a type of white blood cells, called eosinophils, in the esophagus.

Avoiding foods that could cause problems had become the focus of Knox's life, and years of battling the illness had affected his mental state. Even though Knox could eat some foods, fear and anxiety about his condition made him not to want to eat anything. Knox's distress coupled with the symptoms of the condition caused the boy to vomit nearly every time he did eat.

At Mayo Clinic, physicians not only addressed Knox's physical issues, they honed in on the psychological barriers standing in the way of eating. Today Knox can eat just about anything. And, according to his mother, he does. Hamburgers are his favorite, but spaghetti and sandwiches also rank high on the list.

"It's awesome," Knox says. "I feel better. I can sleep better, and I'm not throwing up anymore."

"Going to Mayo Clinic was the best decision we ever made," says Knox's mother, Leslie Rhinehart. "I thank God daily for leading us there."

Knox's eating issues are as old as he is. As a newborn, he struggled to breathe. When he was just nine days old, he was hospitalized for the first time. At the hospital, his heart stopped, and he was put on a heart monitor. His physicians diagnosed him with acid reflux and sent him home with medication and a heart monitor. But Knox continued to struggle. It was not uncommon for the infant to throw up every time he got a bottle, remembers Leslie.

"We bought an extra car seat, and I'd pack extra clothes for him in the car because I never knew if we were out and about if he was going to start throwing up," she says. "We've replaced furniture. We replaced carpeting."

As Knox grew into a toddler, his vomiting was easier to manage, but digestive issues plagued him. He was hospitalized numerous times with unexplained stomach viruses, fevers and infections that were resistant to antibiotics. At age 2, Knox's doctors tested him for eosinophilic esophagitis.

"In seven years, he got seven foods. All of the other nutrition came through the tube."

"They said it was really rare and that he wasn't going to have it, but it came back that he had it," Leslie says. "By this time he was actually malnourished, so they put in a feeding tube."

For the next six months, Knox did not take any food orally. His parents then began reintroducing foods one at a time. Each time a new food was tested, his physicians performed a biopsy to determine how many eosinophils were in his body.

"For seven years, we tried food and biopsies. If the eosinophils were under a certain number, we'd let him keep the food," Leslie says. "In seven years, he got seven foods. All of the other nutrition came through the tube."

In the beginning, Knox was okay with his dietary restrictions, but eating was always a challenge.

"It's very hard to give a child food, take for instance chicken, for two months. Then put him to sleep, have him biopsied, and have that come back that the counts were too high, and he couldn't have chicken anymore," Leslie says.

Soon fear about eating, which triggered chronic, spontaneous vomiting — a disorder known as rumination — began to accompany Knox's condition. So not only did eosinophilic esophagitis itself trigger vomiting, anxiety also caused Knox to throw up. In time, the doctors caring for Knox in his hometown of Greenville, South Carolina, hit a roadblock with her son's treatment, Leslie says.

"We just were not progressing at all. He was depressed. He wanted to eat," she says. "At one point, he said that he wanted to go to heaven because he didn't want to live like this. I knew we had to do something. We knew we couldn't let him keep living this way."

"The one thing that stuck out to me about Mayo was they tend to think outside of the box. They weren't afraid to try new things, and I knew that's what we needed."

Leslie began to research alternate treatments for her son's condition.

"The search kept leading me back to Mayo Clinic," she says. "The one thing that stuck out to me about Mayo was they tend to think outside of the box. They weren't afraid to try new things, and I knew that's what we needed. We needed a major step."

The Rhineharts traveled to Mayo Clinic's Rochester campus, where they met with Imad Absah, M.D., in the Division of Pediatric Gastroenterology and Hepatology.

"By the time I met Knox, he had restricted his eating to the point where he was truly not taking anything by mouth," Dr. Absah says. "He had undergone 17 upper endoscopies with anesthesia prior to seeing me."

Knox's hometown medical providers had attempted to curb Knox's vomiting by treating it as a symptom of eosinophilic esophagitis. But, in fact, the vomiting was an issue that needed to be treated apart from his immune condition, Dr. Absah says.

"The true difference in the story is the rumination had been missed for eight years," Dr. Absah says. "They kept blaming the eosinophilic esophagitis, and that's why he never got better. We were able to identify that he had rumination, and then were able to address those issues."

At Mayo Clinic, Knox's treatment was twofold: physical and psychological. To manage the underlying immune condition, Knox began taking a daily antacid and a topical steroid, which is compounded at Mayo Clinic Specialty Pharmacy.

The psychological issues that had developed as a result of his illness were addressed through cognitive behavioral therapy and psychological support. Knox also worked with physical therapists to learn and practice diaphragmatic breathing, which helped him better regulate his breathing and manage his anxiety.

"With clinical rumination, when you break the vicious cycle of fear and anxiety, you can get rid of it," Dr. Absah says. "Knox is not having regurgitation and vomiting anymore. That part has been identified and cured."

Two weeks after Knox began taking the steroid, which he mixes with chocolate syrup and drinks, he began reintroducing foods into his diet.

"I remember Dr. Absah saying to me, 'I'm not going to treat eosinophilic esophagitis. I'm going to treat Knox Rhinehart.' I thought that was a phenomenal statement."

"He's been able to eat pretty much everything he's ever wanted. He's ecstatic," Leslie says. "Sometimes he eats so much, we have to tell him to slow down. He definitely enjoys his food."

In the year since Knox received treatment at Mayo Clinic, he's gained nearly five pounds and grown three inches. And he's only thrown up once. With the rumination under control, should Knox have further instances of vomiting, his care team will know it's a true flare up of eosinophilic esophagitis and treat it as required, Dr. Absah says.

"I remember Dr. Absah saying to me, 'I'm not going to treat eosinophilic esophagitis. I'm going to treat Knox Rhinehart.' I thought that was a phenomenal statement," Leslie says. "Knox wasn't in the cookie-cutter mold of kids who have this, and so that was really impressive to me. When Dr. Absah looked at me and said he could help him, I could tell by the look on his face that he meant what he was saying, and he was confident he could help my child."