A New Kidney With a Little Help From His Friends 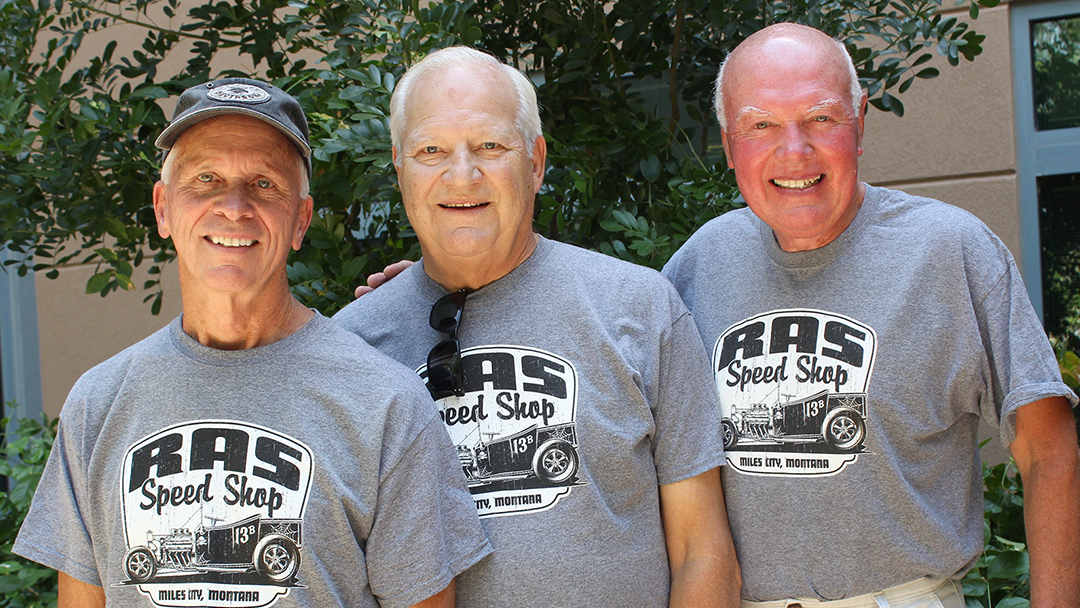 When Fred Anderson needed a new kidney, he didn't have to look far to find eager donors. His friends Jim Ross and Ted Schreiber both stepped forward. Although Jim ended up being the donor, all three banded together to ensure the transplant journey included plenty of support and camaraderie.

Fred Anderson of Great Falls, Montana, isn't deterred by much. His background as a cattle rancher, his 45-year career in public education, and now his time as a member of the Montana House of Representatives, have prepared him to handle all kinds of adversity. That resilience came in handy recently as he went through the process of receiving a new kidney.

Fred's loyal friend Jim Ross also is not one to be deterred. Jim, from Canyon Lake, Texas, was a Navy pilot in 1992 when he led the first F-18 fighter jet into Baghdad during the start of Operation Desert Storm. His skill and nerve qualified him to serve three tours as a pilot for the famed Blue Angels, the U.S. Navy Flight Demonstration Team. When he found out Fred needed a kidney, Jim quickly stepped forward to donate to his longtime friend.

Although it took some time, their fortitude paid off. The two were a match, and Fred and Jim were accepted by the Kidney Transplant Program at Mayo Clinic's Arizona campus. A third friend, Ted Schreiber, joined Jim and Fred in Phoenix to provide care and support, while adding to the camaraderie.

When they learned Fred needed a new kidney, Jim and Ted carefully considered who on "Team Fred" might provide the lifesaving organ. Both were ready to be Fred's donor. But eventually, the trio of friends decided it would be Jim.

With that decision under their belts, the guys were ready to go. But a glitch early on threatened to derail their plans. The first medical center they contacted rejected them. Jim, at 68, was over that facility's age limit to qualify as Fred's kidney donor.

The friends weren't to be deterred, however, and decided to call Mayo Clinic. They were accepted, and both passed the comprehensive tests that showed them to be fit for the surgery and confirmed they were a good match. This time, Jim's age didn't stop him from donating to Fred, who is 74.

The green light to move forward came at an opportune time. Fred's kidneys were functioning below 20 percent, and his condition required regular dialysis. Time was of the essence.

When the day of the transplant came, Fred and Jim were ready to go at 5 a.m. The start of their surgeries was delayed, however, by an event that turned the early start of their day into what the two dubbed a "double-blessing morning." While they were waiting, a donor organ that was a match for another patient came in. "We were honored to wait our turn," says Fred. "Someone else had the blessing of a new life."

Fred and Jim pride themselves on being fearless, and that was their approach toward the transplant surgery. Everything went the way they had hoped it would, and Jim felt strong enough to walk to Fred's hospital room within a few hours after his surgery. Fred wasted no time agreeing to cautious walks around the hospital floor.

Fred and Jim commend their surgeons and the entire Mayo Clinic transplant team. Caroline Jadlowiec, M.D., performed Jim's donor surgery. "The minute I met Dr. Jadlowiec, I knew that she was the person I wanted to do my surgery," says Jim. "She exudes confidence."

"The minute I met Dr. Jadlowiec, I knew that she was the person I wanted to do my surgery. She exudes confidence."

Fred also was impressed with his surgeon, Adyr Moss, M.D. He appreciated Dr. Moss not only for his skills, but also his humor. "He told me his job was to be a 'precision plumber,'" Fred recalls.

"Everyone was so professional," Fred adds. "Just driving here to this hospital campus, you feel good, seeing the nature trail, the people and the friendliness. You know you are at a special place."

After Fred and Jim left the hospital, it was Ted's turn to play a key role in the transplant journey. Ted joined the others at an apartment they rented temporarily in Phoenix so he could be Jim's caregiver. Ted admits, though, the job was pretty easy. Jim felt good enough after his surgery that he really didn't need much caregiving.

Fred's wife, Vicky, was part of the crew, too, serving as her husband's caregiver after the transplant.

During Fred and Jim's recovery the trio of friends spent time reminiscing about their early days. Fred and Ted got to know each other when they worked together — first as teachers and later as administrators. Jim and Ted's history goes back a bit farther — to their high school years. Jim says Ted set him on the right path when they were younger, confessing that he tended to get into trouble. "Ted insisted that I attend confirmation classes with him," says Jim. "It worked."

"Just driving here to this hospital campus, you feel good, seeing the nature trail, the people and the friendliness. You know you are at a special place."

Several days after Fred and Jim's surgeries, they joined Ted for a celebratory photo in honor of their shared passion: cars and drag racing. The three donned T-shirts bearing the letters "RAS," which stand for their last names: Ross, Anderson and Schreiber. The shirt also is emblazoned with the image of a classic car and the banner, "Speed Shop." His friends are proud to point out that Fred has the honor of being in the Montana Hot Rod Drag Race Hall of Fame.

As they reflect on the experience of coming to Phoenix and Mayo Clinic for the transplant, Fred sums up the experience for all of them: "It's like best friends coming home."

This is wonderful. How can. I get on transplant list for kidney at Mayo Clinic? I am 66 and have stage 4 CKD