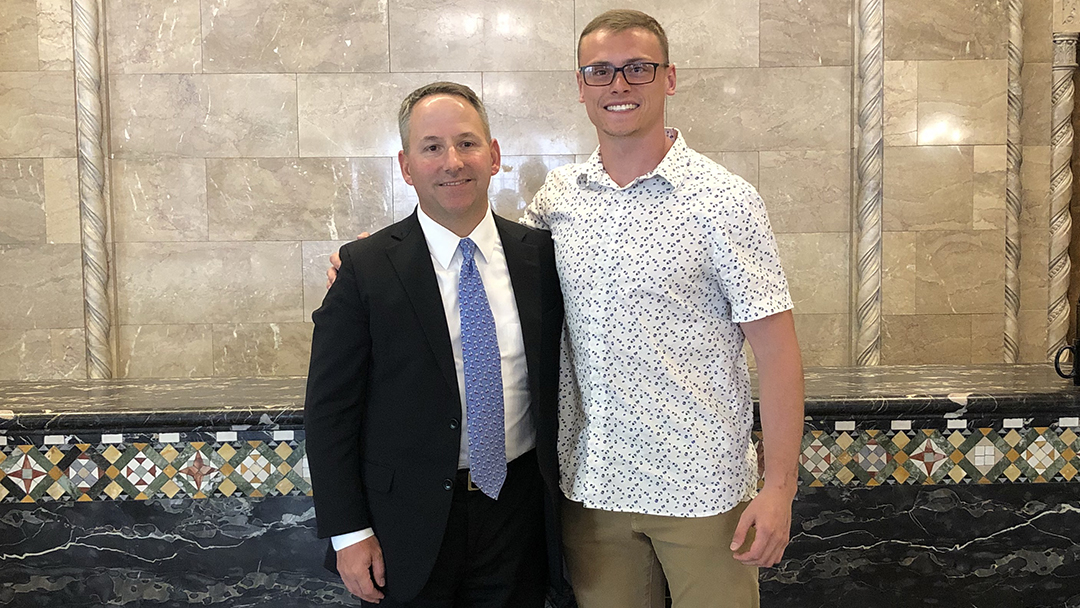 When Kennedy Folkedahl's hand was cut off during a construction accident, the young man thought life as he knew it was over. But thanks to the support of his Mayo Clinic care team and years of physical therapy, Kennedy is embracing an alternate future with enthusiasm and appreciation.

When Kennedy Folkedahl completely severed his left hand during a construction accident in 2015, his life changed in many ways — big and small. Then just 18 years old, he would no longer be able to do a proper pushup. Video gaming became nearly impossible. His future no longer would involve hammering nails or lifting heavy loads — tasks he had mastered easily before the injury.

But Kennedy underwent successful hand replantation surgery at Mayo Clinic Hospital — Rochester within hours of the accident, and he doesn't think much anymore about the negatives in his life. In the years since the accident, he has regained almost complete function in his hand. He's changed and broadened his career aspirations. More importantly, he's developed a gratitude for the circumstances in his life that have allowed for his healing.

"I would say my quality of life is determined not by what I am limited to do; it is determined by how I look at things," says Kennedy, who lives in Des Moines, Iowa.

His outlook wasn't always so optimistic. "When my hand got cut off, I had this sense that it was over," Kennedy says. "It just felt like my dreams were ripped from reality and taken from me the instant I was cut by the saw."

When his medical team learned about Kennedy's sadness, his physician stepped in to provide extra support, encouraging him to stay positive through the lengthy healing process.

"I think the biggest challenge for Kennedy was probably accepting and adapting to his injury," says David Dennison, M.D., the Mayo Clinic hand surgeon who performed Kennedy's replantation, or reattachment, surgery. "He had a lot to get over with being upset about the injury, and I think he came a long way with accepting it and working through hand therapy, and buckling down and getting through it."

Over in an instant

Kennedy's accident took place on May 31, 2015 — the day before his 19th birthday. He was busy at a work site in Decorah, Iowa. He and a co-worker were putting up trim in a second-story apartment, and Kennedy was using a table saw to cut baseboards. As he was feeding the boards into the saw, the blade hit a knot in the wood. The wood jerked forward, Kennedy's sleeve got caught in the saw, and his hand was pulled through and severed just above the wrist.

"I immediately ripped my shirt off and wrapped my nub and tried to control the bleeding," Kennedy says. "I grabbed my hand and sat down in the stairway and told the kid I was working with to get some ice because I was thinking about the opportunity to reattach my hand. I was in such shock. I could still feel my fingers, but clearly they weren't there. I honestly thought I was in a nightmare."

Kennedy's co-worker called for an ambulance, which raced him to Mayo Clinic Health System in Decorah, where he was put on a helicopter that flew him to Rochester. When Kennedy arrived at Mayo Clinic, Dr. Dennison and his operating room team were ready. As Kennedy was prepped for surgery, his hand was prepared for replantation.

"We basically started operating on his amputated hand first to identify, inspect and prepare the bones, tendons, nerves, arteries and veins for replantation," Dr. Dennison says. "Once we had cleaned things up and quickly stabilized the bones, we then began putting the critical structures back together."

"[A nurse] told me they got my hand reattached. It was surprising. But at the same time, I kind of just had a sense of calmness that I was going to be fine."

Because Kennedy's nerves were cut and injured, it was necessary to cut the bone in Kennedy's forearm to shorten the limb, so the nerve ends could be repaired in a location where they would be able to heal and function again.

"The real challenge is trying to repair the nerves, so that they may work," Dr. Dennison explains. "That's probably the number one challenge to help him actually be able to feel things and to help the hand muscles work."

When Kennedy woke up from the approximately eight-hour surgery, it was his birthday.

"I woke up to the nurse anesthetist telling me happy birthday," Kennedy says. "She told me they got my hand reattached. It was surprising. But at the same time, I kind of just had a sense of calmness that I was going to be fine."

Immediately after the surgery, Kennedy could slightly move his fingers. He stayed in the ICU with his hand wrapped in a medical device that supplied continuous heat to his arm and hand to promote circulation. When the swelling and inflammation around his wound began to decrease, he was transferred to a room on a surgical floor for monitoring before he was released.

The first several months of his recovery were exceedingly difficult, Kennedy says. His pain medicine was largely ineffective, and his misery was amplified by the grief he felt about his future.

"I wasn't eating. My mood was terrible. I basically looked after my little brother while everyone else was working and moving on with their lives," Kennedy says. "I pretty much stared at the walls. It was pretty brutal. I was contemplating different outcomes for my life, but I didn't know if anything was going to work out. I almost kind of thought I might be maybe better to have [my hand] off. If it was going to be on and not work, what good would it be?"

During this time, Kennedy's family reached out to his medical team for additional help supporting Kennedy in his new reality.

"[Dr. Dennison's] ultimate goal was to not only make sure that my hand was functioning and working on that end of things, but he really wanted to make sure that I was OK as a person."

"We tried to be optimistic about things," Dr. Dennison says. "Based on the mechanism of injury and mechanics of the reattachment, we tried to prepare him for the months that were required before he could expect things to be working. And we also prepared him for if it wasn't working."

The support Dr. Dennison provided highlighted how much his team cared for him, Kennedy says.

"I was very blessed to have him as my surgeon and be by my side," Kennedy says. "[Dr. Dennison's] ultimate goal was to not only make sure that my hand was functioning and working on that end of things, but he really wanted to make sure that I was OK as a person — that I was looking forward to things in my life and that I was no longer depressed."

As Kennedy progressed into physical therapy, which he received three times a week for two years at a hand therapy clinic in Des Moines, his outlook began to shift. His physical therapists used different massage techniques to loosen the scar tissue and help activate the nerves. Stretching exercises helped reintroduce motion into his fingers. In time, Kennedy was able to strengthen his hand and gain dexterity.

While Kennedy was rehabilitating from his accident, he also attended college. In April 2018, he graduated with a bachelor's degree in business finance. He hopes to continue working in the construction industry, focused more on finance and investing, and less on the actual building.

Today, his fingers have near normal function. While his thumb never will regain all of its previous abilities, he can open his fingers and make a fist. He can hold items, such as a soda can. And he can pinch objects between his thumb and fingers. He can feel hot and cold, distinguish between hard and soft textures, and sense wetness.

Kennedy says the area around his scar does hurt occasionally, especially if he's overworked his wrist and hand. But when he's wearing a watch, his scar is essentially invisible.

"Kennedy really made a big recovery. … Seeing him recover physically and mentally was terrific."

The normal appearance he presents, however, belies the tremendous effort that went into his rehabilitation.

"No one will really know everything Kennedy went through," Dr. Dennison says. "It wasn't just the hand getting better. Kennedy really made a big recovery. He was sad, and it took some time for him to get to the point where he could see beyond the injury. Seeing him recover physically and mentally was terrific."

Part of Kennedy's healing included recognizing that despite the severity of his injury, the circumstances surrounding the event were a best-case scenario. Having a clean cut with a narrow zone of injury, recovering and icing the severed hand, and undergoing surgery within hours of the incident all played into his successful recovery.

"Everything happened so quickly, but it happened right," Kennedy says. "I wasn't going to just leave my hand there and sit and cry about it. I'm always trying to improve my situation. Whatever came over me that day, I was very blessed to have that happen. I am very lucky. God is good."