Released to Reengage With Life 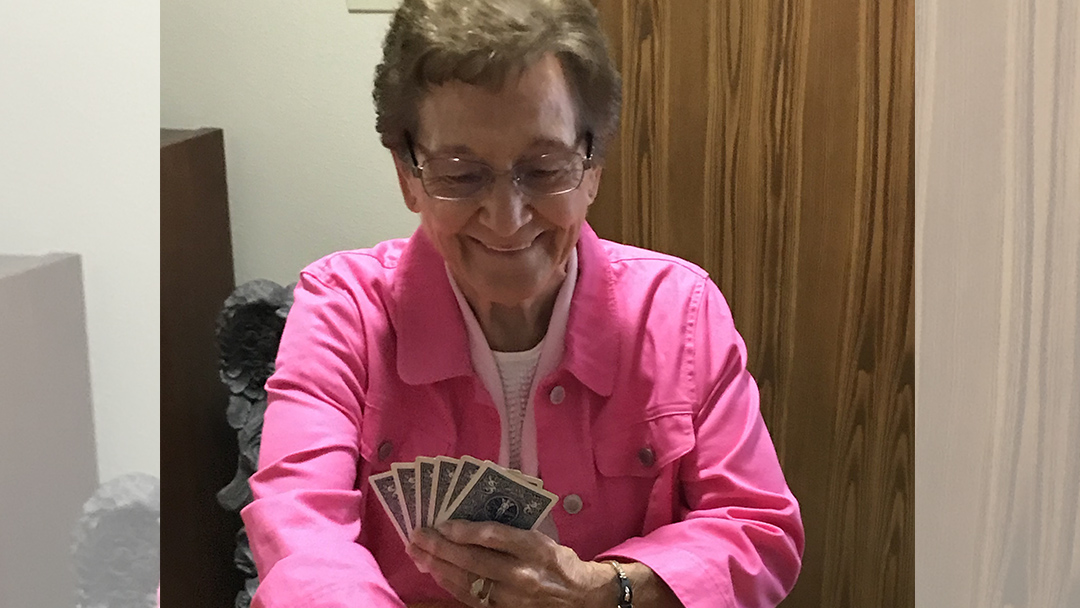 Weighed down by pain and weakness, Valieda Burns became confined and isolated. But neurosurgery to decompress her spine freed her to once again be active, engaged and connected with others.

In July, 78-year-old Valieda Burns took the trip of a lifetime — a 14-day cruise to the British Isles with a side trip to Paris. It was a journey that had been on her bucket list for years, but one she almost didn't get to make.

A year before the cruise, Valieda began having pain in her calf, tingling in her fingers, weakness in her right arm and leg, and then increasing weakness in both legs. Visits to her primary care doctor ruled out back issues or a blood clot. But her condition worsened.

"She couldn't lift her arm or hold on to things. She couldn't manipulate a fork to eat. I had to cut up her meat, so she could eat it with a spoon," Valieda's daughter, Susan Strivens, says. "I had to come over every day to help her shower and get dressed. And her walking was deteriorating very rapidly."

As her health problems grew, Valieda's world shrank. Only able to get around using a walker, the once-active Wausa, Nebraska, resident stopped going to play cards with her friends and didn't want to be out in public. She wasn't able to do day-to-day activities she enjoyed, either, like mowing the lawn or tending to her garden.

"Mom became socially isolated," Susan says. "The only time she went out was to see the doctor."

Knowing that wasn't how she wanted to live, Valieda went to see a neurologist. The appointment led to a referral to Mayo Clinic and, ultimately, to neurosurgery that restored her mobility and gave Valieda the freedom to sail on the cruise she had dreamed of.

Mapping out a plan

In September 2017, Valieda's local neurologist ordered a CT scan and an MRI to investigate her condition. The MRI revealed the source of the problem — a large mass in the back of Valieda's neck was causing severe spinal cord compression at the base of her skull and the top of her spinal cord. The neurologist referred Valieda to Mayo Clinic.

Susan accompanied her mom to a consult with neurosurgeon Benjamin Elder, M.D., Ph.D., at Mayo Clinic's Rochester campus on Nov. 14, 2017. He diagnosed a C1-2 pannus, also called pseudotumor formation. These masses result from instability between the first and second vertebrae in the neck — in the cervical section of the spine — and typically occur in patients with rheumatoid arthritis. They are relatively rare in people like Valieda who do not have inflammatory arthritis.

In Valieda's case, the mass and instability occurred because her first cervical vertebrae had grown together with her skull, putting additional stress on the C1-2 joints. Dr. Elder recommended she undergo a procedure called an occipitocervical fusion, during which the skull is fused to the top of the spine with screws.

"Amazingly, once the spine is stabilized with screws, the mass begins to regress and can even disappear completely over four to six months," Dr. Elder says.

Dr. Elder explained to Valieda that if left untreated, her condition would continue to deteriorate.

"He told mom if she didn't have the surgery, she would eventually be in a wheelchair and could even become completely paralyzed," Susan says. "His goal was to not to let her progress and get worse."

Valieda agreed to have the surgery, confident in Dr. Elder's expertise. "He was very kind and very thorough," Valieda says. "I prayed that I'd be stabilized."

Dr. Elder performed the surgery several weeks later, on Nov. 29, 2017. It went more smoothly than the team had anticipated. What was supposed to be a six-hour surgery only took three.

"If the spinal cord compression is too great, then a second-stage procedure is often required to remove the mass by going through the back of the mouth, which can be quite debilitating," Dr. Elder says. "Fortunately, in Valieda's case, we were able to shave off some of the bone at the base of the skull and the top of the spine to make room for the spinal cord where it was getting pinched, so we avoided the additional procedure through the mouth. I then fused her skull to the top of her spine to stabilize it."

After surgery, it quickly became clear that the procedure had made a significant difference.

"We went to see her in ICU, and the staff asked her to lift her arms above her head. She put them all the way up," Susan says. "I was amazed and so very happy."

When Valieda got up to use the restroom, she noticed a change right away. "I thought, 'I can't believe how good my legs feel.' I felt wonderful," Valieda says.

"My mom is better now than before her symptoms started. She does things now after the surgery that she hadn't done for years. Dr. Elder is our miracle doctor."

Valieda stayed in the hospital for six days following her surgery. To aid in recovery, she participated in rehabilitation for a week after returning home, and she wore a neck brace for six weeks. The improvement continued. Two months after the surgery, Valieda could move around without the help of a walker.

"She is able to be very active," Dr. Elder says. "All of her weakness resolved."

With Valieda happy and busy once more, she and her family couldn't be more pleased with the results.

"My mom is better now than before her symptoms started. She does things now after the surgery that she hadn't done for years," Susan notes. "Dr. Elder is our miracle doctor."