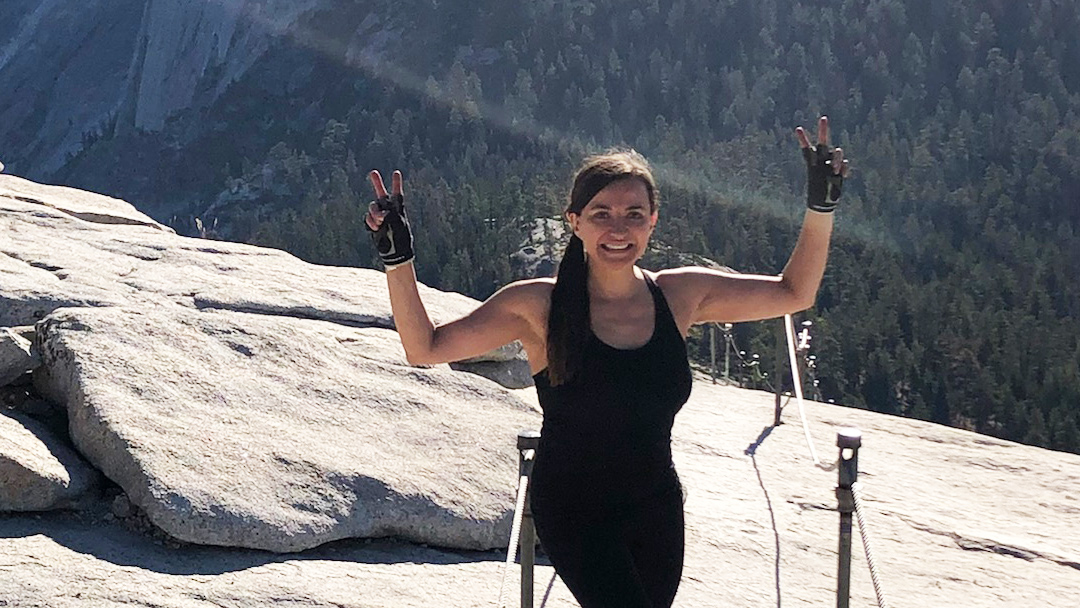 When hip dysplasia triggered painful symptoms, Sandra Cook feared her hiking days were over. But an intricate orthopedic surgery at Mayo Clinic took away the pain, and now Sandra has happily returned to the trails.

When Sandra Cook stood atop the granite monolith Half Dome in Yosemite National Park, not only could she see the beauty of the Yosemite Valley stretching out before her, she also could again envision a future filled with the adventure she loves.

"I was afraid I wouldn't be able to hike the way I had before. Hiking, backpacking, reaching a summit, it means the world to me," Sandra says. "It was so exhilarating to be at the top of Half Dome. At that moment, I felt like it was all going to be OK."

An avid hiker who has trekked throughout the southwestern United States, as well as in Argentina, Chile, China, Peru and Thailand, Sandra was sidelined for almost a year due to severe pain caused by hip dysplasia. At 45, she was worried that her only treatment option would be a hip replacement. But then she learned about another possibility. A surgical procedure known as periacetabular osteotomy, or PAO, might be able to correct the problem and eliminate the pain.

"I am grateful to both of them," she says. "It was a lot longer recovery than I had anticipated, but it was worth it. Now I'm back, and I'm so thankful."

A nurse who puts a priority on staying healthy and active, Sandra was concerned when, in 2014, she started to notice pain in her hip when she lifted weights or went running. At first Sandra assumed the pain was a byproduct of overuse, so she eased up on her activities. The discomfort subsided. But as soon as she resumed her workouts, it flared again.

"I decided I'd give up running, but as long as I didn't have to give up hiking, I'd be OK."

An evaluation and imaging exams revealed the problem went much deeper than wear and tear from exercise. Sandra was diagnosed with hip dysplasia — a condition present at birth in which the hip socket doesn't fully cover the ball portion of the upper thighbone. Many people don't find out they have hip dysplasia until it triggers other problems that cause discomfort. The source of Sandra's pain was damage to the soft cartilage, called the labrum, that rims the hip socket. A labral tear had occurred due to damage caused by her malformed joint.

"I started physical therapy and was told I couldn't run anymore. But at the time I had gotten into hiking and loved it," Sandra says. "I decided I'd give up running, but as long as I didn't have to give up hiking, I'd be OK."

Physical therapy helped for a while. In 2015, however, the pain returned. Sandra's doctors recommended surgery to repair the tear. The procedure, along with additional physical therapy, worked. That allowed Sandra to take her hiking to a new level.

"Before that, I'd just hiked locally here around Phoenix," Sandra says. "Then I got more involved with people who did harder hikes, camping and backpacking. I did a lot of hiking between 2015 and 2017."

Sandra's hiking highlights during that time included an eight-day hike in Patagonia, Chile, in 2016 and hiking the Inca Trail to Machu Picchu in Peru in spring 2017. While in Peru, Sandra also reached the peak of Rainbow Mountain. At more than 17,000 feet, it was the highest elevation she had achieved. That same year, she took on challenging ascents in Glacier National Park in Montana.

Sandra already had her sights set on Half Dome, too. The hike requires a permit that can only be obtained via lottery. She tried to get a permit twice without success. On her third attempt, she secured one for August 2017. But before she could make the trip, her luck ran out.

"The pain started up again at the beginning of 2017, but I went to Peru and Glacier anyway," Sandra says. "I prayed to God, 'Please, just let me make it through Half Dome, and then I'll do whatever I need to do.' I got through Glacier. But when I came back, the pain completely knocked me off my feet."

It was then that Sandra met with Dr. Hartigan. He confirmed that the pain was due to a labral tear. Although Sandra continued physical therapy, it wasn't enough. The pain persisted. The two discussed the possibility of a hip replacement. They agreed it wasn't the best approach for her.

"Hip replacements usually only last about 20 years, and then I'd need another one," Sandra says. "A second one is not as likely to hold for that long or allow for a high level of activity. Dr. Hartigan knew I wanted to be active all my life, so a hip replacement now wasn't a good choice."

Dr. Hartigan consulted with Dr. Sierra, one of two surgeons at Mayo Clinic who perform periacetabular osteotomy surgery. That procedure seemed like it could be the best option for Sandra's situation. But it wasn't a sure thing, due to her age.

"It's not common to have this procedure in the 40s," Dr. Sierra says. "First, it's rare for people with dysplasia to get to their 40s without some arthritis in the hip, and if they have arthritis, we usually don't recommend the surgery. Second, it's a harder recovery for a patient older than 40. So we don't recommend it for that age group unless they have excellent circumstances. It can work, but you have to choose the patients very carefully."

"While there still is a risk of requiring some type of hip replacement down the road, we've been able to show that PAO decreases the risk of needing hip replacement at 10 and 20 years by about 66 percent."

Another concern was the state of the cartilage in Sandra's hip joint. If it had sustained too much damage over the years, she wouldn't be a good candidate for the procedure.

Dr. Hartigan and Dr. Sierra crafted a plan to team up on Sandra's surgical case. Because there was some question as to whether her cartilage would be good enough for a periacetabular osteotomy, Dr. Hartigan first performed hip arthroscopy to assess the cartilage. Dr. Sierra reviewed images from the procedure and provided input.

"Many patients have the arthroscopy and PAO at the same time," Dr. Sierra says. "But in her case, because she was traveling from a distance and it wasn't clear whether she could go forward with the PAO, we decided to tag-team it."

After the hip arthroscopy, the news was good. The cartilage in Sandra's hip joint was acceptable for the PAO.

A complex surgery, periacetabular osteotomy corrects hip dysplasia by repositioning the hip socket while preserving the natural hip joint. During the procedure, the socket is cut free from the pelvis. It's then shifted, so the socket is better aligned with the top of the thighbone, allowing for proper rotation. For Sandra, having the surgery meant her hip would be much less vulnerable to injury, and she would be free to continue her active ways.

"This procedure improves the mechanics of the hip and protects it from progressive damage," Dr. Sierra says. "While there still is a risk of requiring some type of hip replacement down the road, we've been able to show that PAO decreases the risk of needing hip replacement at 10 and 20 years by about 66 percent."

Those numbers heartened Sandra as she considered the surgery, but it was still intimidating.

"When Dr. Hartigan first explained it to me, I thought: 'Oh no. I'm not having that surgery.' It seemed too extensive and the recovery too long," Sandra says. "After the arthroscopy, I was waiting for him to come and tell me whether I had enough cartilage to do the PAO. Part of me wanted him to say I didn't because I was scared. But really, I knew it would be the best option."

Despite Sandra's misgivings, when she found out she was a good candidate for periacetabular osteotomy, she opted to go ahead. In October 2017, she traveled to Mayo Clinic's Rochester campus, where Dr. Sierra performed the surgery. All went according to plan. Sandra stayed in the hospital for three nights and then remained in Rochester for one more before flying home to Phoenix.

Recovery, however, did not go as smoothly. In December, after being cleared to return to work, Sandra suffered a setback when her pelvic floor muscles went into continuous spasms, causing extreme pain. After the spasms were brought under control, during a light hike in February, Sandra's pubic bone fractured. That put her on crutches for three weeks. To her relief, the fracture healed well, without additional complications.

Finally, 11 months after she canceled her first trip to Yosemite due to debilitating pain, Sandra was cleared to resume hiking and backpacking. Pain-free and ready to take on a challenge, her thoughts again turned to Half Dome.

"I owe a debt of gratitude to Dr. Hartigan and Dr. Sierra for helping me regain a lifestyle that I so love living."

During January, in an effort to keep her spirits up, she had entered the Half Dome lottery and received a permit to climb in July. Over July 6 and 7, Sandra confidently completed the hike, carrying a 30-pound backpack for much of the trip. And she did it all without pain.

"Making it up Half Dome, I felt very empowered," Sandra says. "It gave me my hope back, my joy back."

Today Sandra's looking to new adventures. Her list includes hiking to base camp at Mount Everest and climbing Mount Blanc in France.

"For a while, I thought those might be out of my reach. Now I feel I can take them on and do what I want to do," she says. "I owe a debt of gratitude to Dr. Hartigan and Dr. Sierra for helping me regain a lifestyle that I so love living."