Using Expertise and Teamwork to Tackle a Brain Tumor 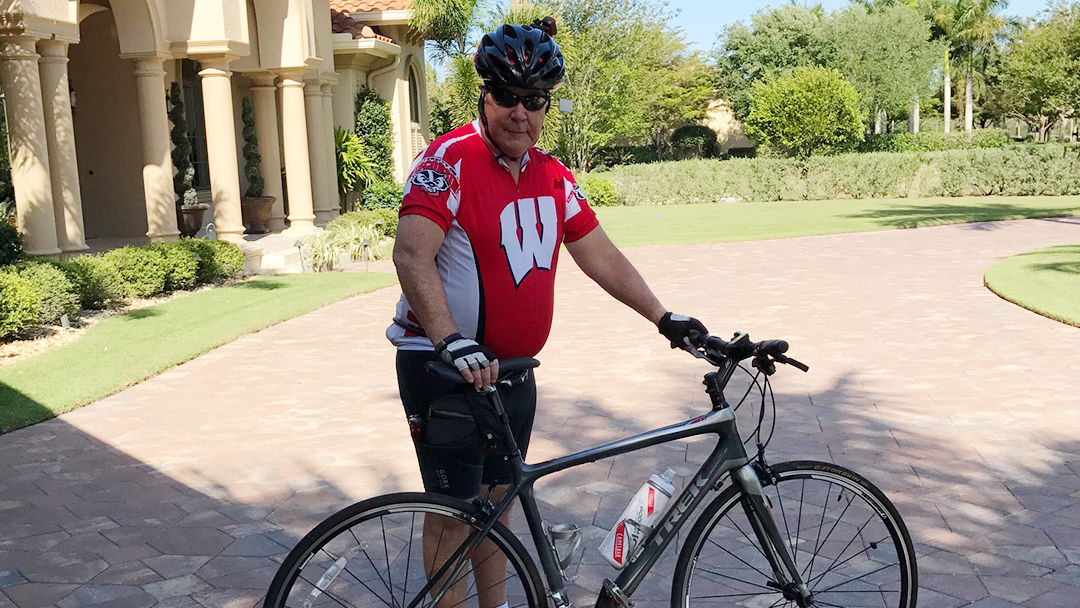 After being plagued by mysterious symptoms for more than a year, Richard Uihlein was diagnosed with a brain tumor and told nothing could be done about it. Undeterred, he went to Mayo Clinic for a second opinion. There he found a way forward after all.

For more than a year, Lauralee Uihlein couldn't shake the feeling that her husband, Richard Uihlein, had a serious health problem.

His symptoms were subtle at first. Richard tired easily and was moody. His appetite increased, and his eating habits changed drastically. For years, he had followed a healthy diet that helped him lose 35 pounds. But he stopped that completely and was snacking on mixed nuts and treats, seemingly nonstop. "I felt like I had to nail down the cupboard," Lauralee says.

She mentioned her concerns during one of Richard's visits with his primary care physician near their home in Naples, Florida. The doctor said Richard's behavior was most likely a normal reaction to stress and aging. "His mother had just passed away. 'Maybe Richard was depressed,' the doctor said. And we're both getting older. I think the doctor felt I expected too much from him," Lauralee recalls.

By early 2016, Richard's symptoms were getting worse, and new ones surfaced. Where he would once ride his bike more than 40 miles a day, Richard was now down to 4 or 5 miles. After the short rides, he'd sleep for hours. Lauralee and her son recall Richard yelling at the family dog — in German.

"I haven't spoken German since I was a young child," says Richard, who has to rely on Lauralee to recall most of what occurred during 2016 because he doesn't remember much of it.

Convinced that Richard might have some combination of a neurological and endocrine disorder, Lauralee took him to specialists in both those areas. The visits confirmed her fears. Richard had a craniopharyngioma — a rare type of brain tumor that typically appears in young children or in adults between 50 and 74.

An answer but not a solution

The tumor in Richard's brain was large for a craniopharyngioma. About the size of a golf ball, it was pressing on his pituitary gland. Learning the diagnosis gave the Uihleins no comfort, though, because the neurosurgeons in their community told the couple that the tumor was inoperable. While craniopharyngomas are not cancerous, if left untreated, Richard's would continue to grow. Eventually it would affect other areas of his brain, causing seizures, blindness and strokes.

"I didn't want to strap Lauralee with that," Richard says. "We both knew we had to get a second opinion."

"[Dr. Quinones] told me he was familiar with Richard's condition, and he was confident the team could treat it. He let us know we were in the right place at the right time."

Lauralee shared their thoughts with Richard's endocrinologist, who had trained at Mayo Clinic. The endocrinologist agreed they should seek a second opinion and told them about Alfredo Quinones-Hinojosa, M.D. Dr. Quinones, chair of Neurosurgery at Mayo Clinic's Florida campus, is renowned for his surgical expertise and his research in pituitary tumors and other types of brain tumors. The couple made an appointment to see him the following week.

Almost immediately, the Uihleins felt confident about their decision to come to Mayo Clinic. One of Richard's first appointments was for an MRI to gather more information about the size and location of his tumor. While Lauralee was in the waiting room, Dr. Quinones visited her.

"He told me he was familiar with Richard's condition, and he was confident the team could treat it," Lauralee says. "He let us know we were in the right place at the right time."

Experience was one reason for Dr. Quinones's confidence. He's performed about 250 procedures on craniopharyngomas and other tumors that arise in the same region of the brain. He used that experience to plan a surgical procedure that was a combination of techniques that he's learned through the years.

Teamwork was equally important. Dr. Quinones reviewed his plan with a team of surgical colleagues. In the operating room, he is part of a multidisciplinary team that specializes in procedures like Richard's.

"Everyone on the team — the anesthesiologists, the nurses, monitoring techs and so on — specializes in neurosurgical procedures," Dr. Quinones says. "That maximizes the chances that you'll have a better outcome."

About 15 people were in the operating room for Richard's surgery, which took place in January 2017 and lasted more than six hours. In addition to its unusual size, the tumor had tendrils that were perilously close to Richard's optic nerve and carotid artery.

Dr. Quinones and his colleagues had to remove bone from Richard's face temporarily, and then use microscopic techniques to unravel and remove the tumor and its vines.

Shortly after Richard woke from surgery, Lauralee saw encouraging signs. The skin around his eye was swollen, but he could see. That was as a relief because vision loss was a possibility, given the nature of his surgery.

Later, as the medical staff moved Richard to another location, Lauralee witnessed more evidence of a good outcome. "He was directing the nurses, so I knew he was in good shape," she says.

Richard returned home after 14 days and began months of physical and occupational therapy, as well as other rehabilitation. Then in March, less than four months after surgery, Richard was back on his bicycle. "It was only a 4-mile ride," Richard says. "But it was a beautiful day, and I was happy to be alive."

Another round of care

Though he continued to improve and regain his quality of life, in early 2018, Richard's recovery hit a bump. In April, during a return visit to Mayo Clinic, Richard learned a cyst was growing near the tumor site. His care team had an answer for that, too.

"Proton beam therapy is the best treatment for a cyst like Richard's, and we have the luxury of working with the radiation oncology experts who run our proton centers in Arizona and Minnesota," Dr. Quinones says.

"The staff in Arizona was just like the team in Florida. They just bent over backward to make everything as good as possible."

For six weeks, Richard received proton beam therapy at Mayo Clinic's Arizona campus. That experience was a testament to his recovery after the original surgery. Richard went to Arizona by himself and rode his bike to and from the proton beam center for some of his treatments.

"The staff in Arizona was just like the team in Florida," Richard says. "They just bent over backward to make everything as good as possible. No one wants to have a brain tumor. But given that, my experience at Mayo has been wonderful."

Richard continues to visit Mayo Clinic every three months for monitoring, and his prognosis is excellent, Dr. Quinones says. Now the Uihleins are looking forward to celebrating their family.

"We have a new grandson, and my daughter is getting married in May, so the next year will be full of blessings," Richard says. "Beyond that, we'll take it one step at a time."

But they can't help reflecting on the path that led them to Mayo Clinic. "Our story shows you that you have to trust your gut," Lauralee says. "If you know something is wrong, keep pushing and get a second opinion. If we had come to Mayo and they confirmed what we had heard — that nothing could be done — we would have at least felt like we had done everything we could."

Richard and Lauralee hope their story will inspire other patients and families, but they are doing more than sharing their experience. They also are supporting brain cancer research at Mayo Clinic. With support from the Uihleins and other benefactors, Dr. Quinones and other Mayo Clinic researchers are studying regenerative medicine, immunotherapy and additional strategies to improve the treatment of brain cancers, which are often aggressive and resistant to many chemotherapies.

"Richard and Lauralee give me so much energy and enthusiasm," Dr. Quinones says. "They feel blessed to be in the position they are in today, but they are also wondering how they can make things better for other people. They believe that together, we can make the world better, and that inspires me as a physician and researcher."