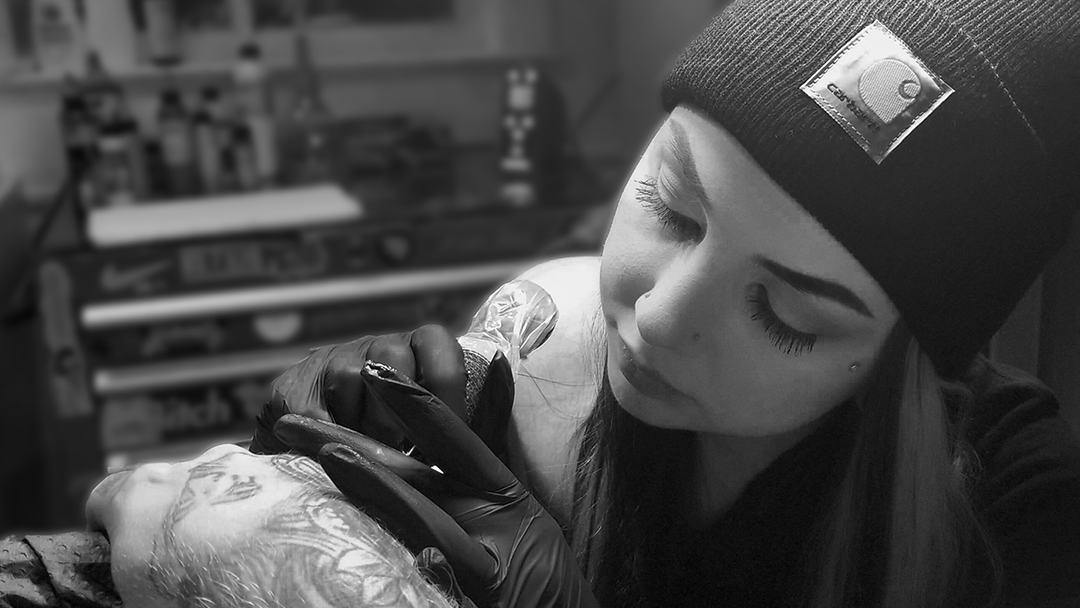 Lupus was wreaking havoc on Emily Olson's health. Her Mayo Clinic care team's decision to employ a medication typically not used for this autoimmune disorder, along with a kidney transplant, not only saved Emily's life, it reignited her independence and confidence.

Emily Olson has always loved drawing, and she wanted to make a living with her art. At 19, she decided to pursue that goal by becoming a tattoo artist. Just six months after she began working at a tattoo shop, however, Emily's hopes for her future appeared to be in jeopardy. Diagnosed four years earlier with lupus, her symptoms began to get progressively worse.

That decline was the beginning of a series of complications that that led Emily to Mayo Clinic. Her care team at Mayo guided her through treatment, including a kidney transplant, that allowed Emily to move forward in her life and her career.

"I recommend Mayo to anyone who has a serious health issue," Emily says. "I feel like if I had gone anywhere else, things would not have turned out as well as they did."

Lupus is an autoimmune disease in which the immune system attacks the body's tissues and organs. Over the years, Emily tried to live with the joint pain, rashes and fatigue that result from the inflammation lupus causes. But one night in January 2017, she was so out of breath trying to go up the stairs in her home in Osceola, Wisconsin, that her mother drove her to the local emergency department. She was diagnosed with pneumonia.

"I didn't think that was right, so the next morning my mom and I drove two-and-a-half hours to the ER at Mayo Clinic in Rochester," Emily recalls.

Emily's instincts were right. There was much more going on than pneumonia. Tests showed her potassium level to be extremely high, and lab work revealed that her red blood cells and platelets were being destroyed. She was diagnosed with lupus nephritis — an inflammation of the kidneys caused by lupus. Emily was sent to the intensive care unit, where she was seen by Mayo Clinic rheumatology fellow Ali Duarte-Garcia, M.D.

"I lost my vision for three or four days. That was the peak of everything bad happening."

"We did several plasma exchanges with donor plasma to try to stop her kidney damage, but she wasn't turning around," Dr. Duarte-Garcia says. "She had a rare complication of lupus called thrombotic microangiopathy. After several tests, we found a group of proteins, called complement, were abnormal. This group of 30 proteins is critically important in the body's defense against infection."

It got worse. Several days later, Emily's blood pressure was very high, and when she woke up, she had lost her vision.

"I lost my vision for three or four days. That was the peak of everything bad happening," Emily says. "As a tattoo artist, it would have been horrible if I lost my vision."

An MRI showed the vision loss was caused by swelling in Emily's brain due to the excessive water weight gain from kidney failure. Doctors put her on dialysis, which pulled three liters of water from her body a day.

"I felt so much better after starting dialysis, and my vision was coming back," Emily says.

"Patients with aHUS also have these abnormal proteins. So we felt the medication might be effective for the rare complication of lupus Ms. Olson had, which involved the same abnormal proteins," Dr. Duarte-Garcia says. "Almost immediately, her platelets started to go up and her anemia stabilized."

"Dr. Duarte-Garcia is smart and determined," Emily says. "He was the one that pushed for the infusion that saved my life. I'm really grateful for that."

After 30 days, Emily was discharged from the hospital. She continued dialysis three days a week for three hours a day, all while working 30 hours a week creating tattoos. But after six months, her kidneys had not improved.

She was diagnosed with chronic kidney failure. Emily needed a kidney transplant. "I had mixed emotions because I'd hoped my kidneys would start working again," Emily says.

Working in her favor was the fact that, after six months of medication, Emily's lupus was in remission. She was put on the transplant list in February 2018.

Initially, Emily's hope was that she wouldn't have to wait years, as some people do, for a kidney to become available. But she didn't have to worry. On April 18, just two months after being placed on the transplant list, Emily got a call that a donor kidney was available.

"They called me at 10 a.m., and I drove straight to Rochester," Emily says. "I didn't want to get too excited until they said everything was good to go. There was a huge possibility that it may not work, so I was nervous."

Emily underwent transplant surgery the next morning. Doctors told her it could take up to a week for the kidney to start working. "It started working right away," Emily says. "That was a huge relief."

"Everyone was super nice and really tried to figure out what was wrong with me. You can tell that they really care about their patients."

Discharged from the hospital two days later, she rented a house in Rochester for three weeks while she was recovering. "It was a super easy recovery," Emily says. "I feel really good."

Not only has her health improved dramatically since the transplant and her lupus treatment, Emily's work life has taken off, too. Today, she owns her own tattoo studio where she custom draws all of the tattoos.

Looking back on her experience at Mayo Clinic, Emily says she's extremely grateful to Dr. Duarte-Garcia and the entire medical staff at Mayo for the care she received, which resulted in a complete turnaround.

"Everyone was super nice and really tried to figure out what was wrong with me," Emily says. "You can tell that they really care about their patients."

I can relate to Emily so much I am also an artist! I was diagnosed with Lupus at age 12 and I am now 23. I started dialysis when I was 19 and I have had no luck with a transplant. I have a new team now and they are trying to refer me to Mayo Clinic. After reading this, It brings me so much hope! I've already been on the list for 4 years at Stanford and nothing. I'm from Las Vegas and my local transplant center will not accept me. I look forward seeing everyone at Mayo Clinic!!