Winning Against All Odds 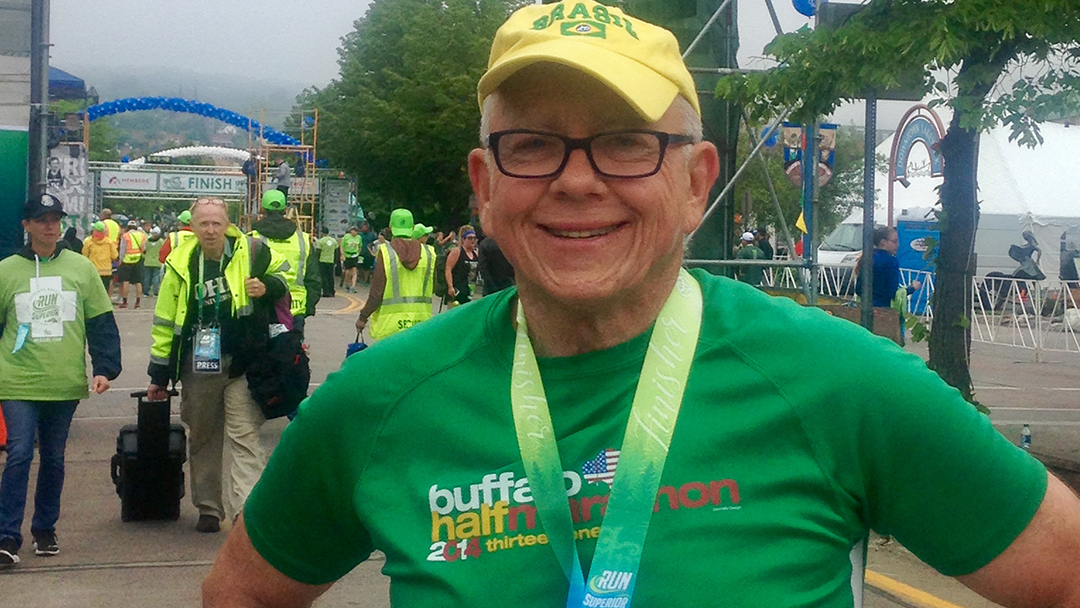 Andy Steinfeldt discovered his love of running late in life. When a series of medical conditions and complications threatened his newfound hobby, he refused to accept a future where he wasn't able to compete.

As a high schooler, Andy Steinfeldt wasn't an athlete. He never won a ribbon or medal for anything fitness related. But now, in his 70s, the Minnetonka, Minnesota, resident is raking in the athletic awards.

Over the past two years, Andy has placed in a multitude of marathons, basketball, track and field, and strength events at the Minnesota, Iowa and South Dakota Senior Games. He routinely practices mind-boggling feats — such as performing numerous handstand push-ups and sustaining a 35-minute plank position — as part of motivational presentations he offers.

Andy's enthusiasm and athletic prowess was born out of a desire to rise up against a series of life-limiting health conditions. He's been supported in his efforts by a team of Mayo Clinic clinicians who have fostered his healing and rehabilitation, including Jonathan Finnoff, D.O., a sports medicine specialist in the Department of Physical Medicine and Rehabilitation.

"I think there were a number of different factors that went into his success," Dr. Finnoff says. "One is that he did have a remarkable physical recovery, where his body overcame the obstacles and healed well. But he also had the fortitude and the psychological profile to be able to overcome adversity and be dedicated to his goals. I think that had a huge amount to do with it."

Andy's foray into running began in 2011. A retired businessman, he was 63 years old when his son Loren asked him to run a 5K race with him. Andy agreed.

"It was a struggle, as I hadn't run since gym class in high school," Andy says. "I stopped several times but got through it and got a little hooked in the process. I kept it up and gradually increased my distance."

That race sparked Andy's desire to push himself farther. Three years later, in 2014, he ran his first half-marathon. Later that same year, he tried his first full marathon. But that race didn't go well. As he ran, the lower part of Andy’s right leg went partially numb, and he was forced to drop out.

Andy sought attention from medical specialists in the Twin Cities area, but he was initially misdiagnosed. When he finally received the correct diagnosis in early 2015, it was determined that a blood clot had occluded, or blocked, two of his arteries. He would need surgery to remove the blockage.

"Dr. Froehling and the wound care specialists in his department knew just what to do."

During that procedure, one of Andy's arteries was perforated. His leg filled with blood, and in an effort to save his leg, his surgeons performed a procedure known as a fasciotomy, which entailed cutting through the muscles on both sides of Andy's lower leg. The remedy to mitigate the bleeding sidelined Andy. Not only were his leg tissues damaged, but just one artery remained intact. Andy was told by more than one physician that because his circulation was so severely compromised, his running days were over.

Rather than curtailing his athletic endeavors, the episode powered Andy's quest for healing. That search motivated him to reach out to Mayo Clinic: first for wound healing and then for training advice.

One of his first interactions at Mayo was with David Froehling, M.D., in the Vascular Center.

"His leg was starting to get better, but it was slow to heal. One of the things I was able to do for him that made him feel better was send him to the Wound Care Center," Dr. Froehling says. "It was a simple thing, but it really helped him in getting his wound to heal more quickly."

Receiving that wound care was a "godsend," Andy says.

"Dr. Froehling and the wound care specialists in his department knew just what to do," he says. "I had this wound that wasn't healing for six months. After I started going in, it was six weeks before it was completely healed."

Andy's leg injury was just the latest in a series of medical issues he has faced. In 2014, he was diagnosed with prostate cancer, which was removed robotically through six incisions in his abdomen. Shortly after the surgery, Andy went into kidney failure and was sent back to the operating room. His abdominal incisions were reopened, and the problem causing his kidney failure was corrected.

"All together, I had 14 separate openings of my abdomen over a period of two years," Andy says. In addition to his prostate surgery, he had abdominal surgery to correct a hernia and another surgery to remove his appendix.

“Each abdominal opening weakens the abdomen and lessens one’s ability to perform exercises that require abdominal strength,” Andy says. “But I gradually built up my abdominal strength to be far greater than it was prior to all the surgeries.” 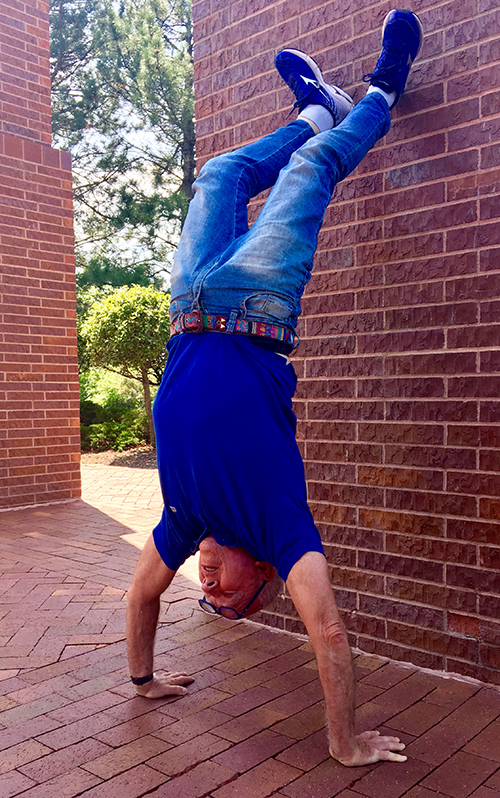 In addition to surgical treatment of Andy’s prostate cancer, he also received radiation therapy. Neither the abdominal operations nor the radiation slowed him down.

"A lot of people when they get radiation therapy, they get knocked out and depressed. I decided I would step up my game rather than lie low," Andy says, explaining that he continued training for long-distance running even during his radiation treatments.

But prostate cancer, the blood clot and the surgical complications weren't the end of Andy's health concerns. In 2016, he began experiencing intense pain in his lower neck and shoulders. Andy had developed a rare neurological condition called Parsonage-Turner syndrome. A painful disorder believed to be caused by an abnormality in the immune system, Parsonage-Turner syndrome affects the nerves leading from the neck to the shoulders and arms.

"We have no idea why it happens," Dr. Finnoff says. "It can affect all the nerves, one nerve, sensory nerves or motor nerves, so it's a mixed bag. But it hurts a lot. You get a lot of weakness. And depending on which nerve is affected and the severity, there will be variable amounts of recovery."

In Andy’s case, not only had the illness caused inflammation, pain and weakness in his neck and left shoulder, but it also contributed to Andy’s left rotator cuff tearing.

With his leg issues resolved and his shoulder pain under control, Andy resumed his exercise routine. Lifting light weights, using cross-training equipment, and practicing push-ups, sit-ups and burpees were among the activities Andy engaged in as part of his fitness regime. Despite being told he wouldn't run again, Andy started jogging.

"I've got this thing where when somebody says, 'You can't do it,' then I say, 'Yes, I can' and try all the harder," Andy says. He set a goal to complete the marathon he had to quit two years earlier.

To help him better prepare for the 26-mile run, Andy sought advice from Dr. Finnoff, who recommended he work with a physical therapist to develop a training program that would safely prepare him for the endurance event.

"This is a super-motivated individual who loves higher intensity exercise and loves doing things that people think are impossible," Dr. Finnoff says. "He likes to demonstrate how he can overcome adversity, and not just beat but crush people's expectation of what somebody his age and condition can do."

"[Andy] likes to demonstrate how he can overcome adversity, and not just beat but crush people's expectation of what somebody his age and condition can do."

Andy’s ability to push through health problems was put to use earlier this year when prostate cancer was again detected. In August, he began a 38-day course of radiation treatments — a therapy schedule that coincided with training for this year's senior games. Despite his cancer treatment, Andy still participated in the games and earned multiple medals in numerous events.

From Dr. Finnoff's standpoint, Andy's fitness level, given his medical hurdles, is remarkable.

"That someone would return to this condition after a totally occluded artery is extremely rare," Dr. Finnoff says. "It's sort of one in a billion. I don't know who else could have done that."

In Andy's mind, staying happy and active is key to his success. In addition to athletic pursuits, Andy can sing in five languages, has performed professionally and has 35 musical recordings.

"I know it is easy to feel sorry for yourself and get depressed and get this 'why me' kind of attitude about things," he says. "So what I am doing is just facing this with as happy as a face as I can and doing training, competing and singing. They all make me happy, and I'm going to have as much of that as I can."