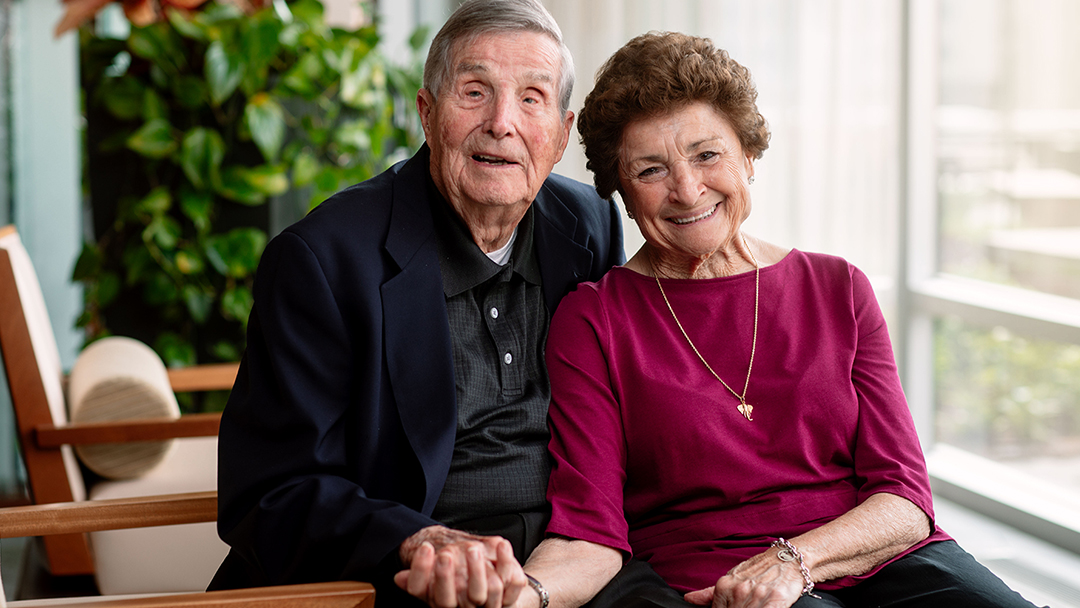 Warren and Marilyn Bateman's links to Mayo Clinic stretch back through decades past, and their commitment to supporting the organization will endure for years to come.

A framed handwritten recipe for pickles adorns a wall of Warren and Marilyn Bateman's home in the hills of Maggie Valley, North Carolina. It was part of a birthday card for Marilyn and includes a scrawled signature below the recipe — one that has become one of the Batemans' most treasured gifts.

The card was from Sister Generose Gervais, a longtime administrator at what is now Mayo Clinic Hospital — Rochester, Saint Marys Campus.

"She was a delight," Marilyn says with a smile as she recalls Sister Generose, who passed away in 2016. "Always wanting you to stop to chat and have a candy from her candy dish, or help her make pickles."

The Batemans say they're blessed by the values and memory of Sister Generose. The iconic pickle recipe is a reminder of her compassion, respect and excellence. It's just one of the connections to Mayo Clinic that led the Batemans to support a number of causes, and to honor Mayo Clinic nurses and Sister Generose.

Connecting to a special place

The Batemans grew up in small Minnesota towns, each forging their own connections to Mayo Clinic.

Warren lived in Plainview. But it was about 19 miles away, in Rochester, where he made one of his most cherished childhood memories in August 1934. Warren, who was then 11, joined his father to travel in their Studebaker from Plainview to Rochester to see President Franklin Roosevelt honor Drs. William J. and Charles H. Mayo, M.D.

"I was very small, so I was able to wriggle into the front row," Warren says. "To see the president — that was a big deal. And for the president to come here, it was special."

Over the years, Warren came to view Mayo Clinic as a special place. He fondly remembers many automobiles around Central Park in downtown Rochester on his visits to sell cabbage or other farm-fresh goods.

"You could take a trip around the United States just by walking the block."

"When I was a kid, they didn't allow local residents to park there, so I'd walk by and see the license plates from all different places," Warren says. "It was incredible. You could take a trip around the United States just by walking the block."

Warren served in the U.S. Navy in World War II, eventually becoming a commissioned officer and drawing an assignment on the fleet admiral's staff near the end of the fighting. Following the war, he served more than 20 years as a reservist while becoming a successful lawyer.

Warren didn't return to Mayo Clinic until long after he had retired. He developed a rash while living in Miami, and he came to Rochester for a second opinion. At Mayo Clinic, Warren was given a more accurate diagnosis than the one he originally received in Miami. From there, he and his Mayo care team drew up an individualized care plan for his needs.

"That was when I started coming to Mayo," Warren says. "I was always pleased that they told me the truth, and that's why I kept coming back."

For Marilyn — a native of Austin, Minnesota — it was the reputation of the Methodist-Kahler School of Nursing that drew her to Rochester in 1954. After graduating in 1957, she worked with some of Mayo Clinic's most well-known general and thoracic surgeons at the time — O.T. Clagett, M.D., Philip Bernatz, M.D., and William C. Mayo, M.D., the grandson of Dr. William W. Mayo and son of Dr. Charles H. Mayo.

"They were not only fine surgeons, but fine gentlemen," Marilyn says. "I loved working with them."

Later she worked for a Mayo Clinic-backed research project and then as the first nurse certified in preoperative and postoperative waiting areas, as well as recovery areas for same-day procedures.

Marilyn retired in 1997 — the same year she and Warren married on Valentine's Day.

Their long-standing connections to Mayo Clinic have inspired the Batemans to give back. At Christmastime, they give to the Poverello Fund, an endowment that offsets a portion of medical expenses for patients receiving care on the Saint Marys Campus. Since its founding in 1983, the fund has helped more than 13,000 patients.

The Batemans began giving to the fund by contributing a percentage of the sale of their house. That drew a visit from Sister Generose, who wanted to learn more about the family's intent for the funds.

The Batemans also worked with Mayo Clinic's Department of Development to recognize their gifts to capital projects, research and the Mayo Clinic Model of Care.

"Mayo Clinic is truly a part of our lives, and it always feels like family."

"I was over in Saint Marys and saw all those statues for the sisters, and there was nothing visible in the Gonda Building for the nurses," Warren says. "I wanted a person when they came here, to think of a nurse or the nurses that treated them."

With that in mind, the Batemans respectfully declined to have an atrium in the Gonda Building named in their honor. Rather, they advocated for naming the space for Mayo nurses. Now called the Mayo Nurses Atrium, it's the largest-known physical space named in honor of the nursing profession at any medical center.

Two inspirational pieces are included in the atrium. First is "Forever Caring" by Gloria Tew. It was dedicated in 2003 to honor Mayo Clinic nursing professionals — past, present and future. The bronze sculpture portrays nurses in practice, education and research.

Most recently, the Batemans saw the need to continue advancing surgical projects at the Saint Marys Campus. To that end, they donated funds to support the construction of new operating rooms.

The rooms are important because of an increase in the number of patients who need complex surgery. Across Mayo Clinic, about 130,000 surgeries are performed each year, with many challenging cases handled on the Saint Marys Campus.

The new operating rooms are nearly 1,000 square feet each to accommodate new technology and robotics that will not fit into existing operating rooms. They also let more specialists work simultaneously. This allows Mayo Clinic surgeons to help patients who need more complex surgeries or are at higher risk for complications. The rooms also offer the opportunity for surgeons to pursue the best practices in robotic, hybrid and surgical innovations.

True to the Batemans' philosophy of declining recognition, their support for these rooms is given in honor of Sister Generose.

"She had such a presence," Marilyn says. "She worked so hard for each and every patient and staff member."

That sentiment fits with the Batemans' view that Mayo Clinic's reputation comes from its people.

"At Mayo Clinic, you feel welcome," Warren says. "Everyone treats you with a smile. The doctors, the nurses, they all say, 'Is there anything else bothering you?' They want to treat you. They're interested in you."

"Mayo Clinic is truly a part of our lives, and it always feels like family," Marilyn adds. "It's like coming home."

Note: A version of this article was published previously in Mayo Clinic Magazine.