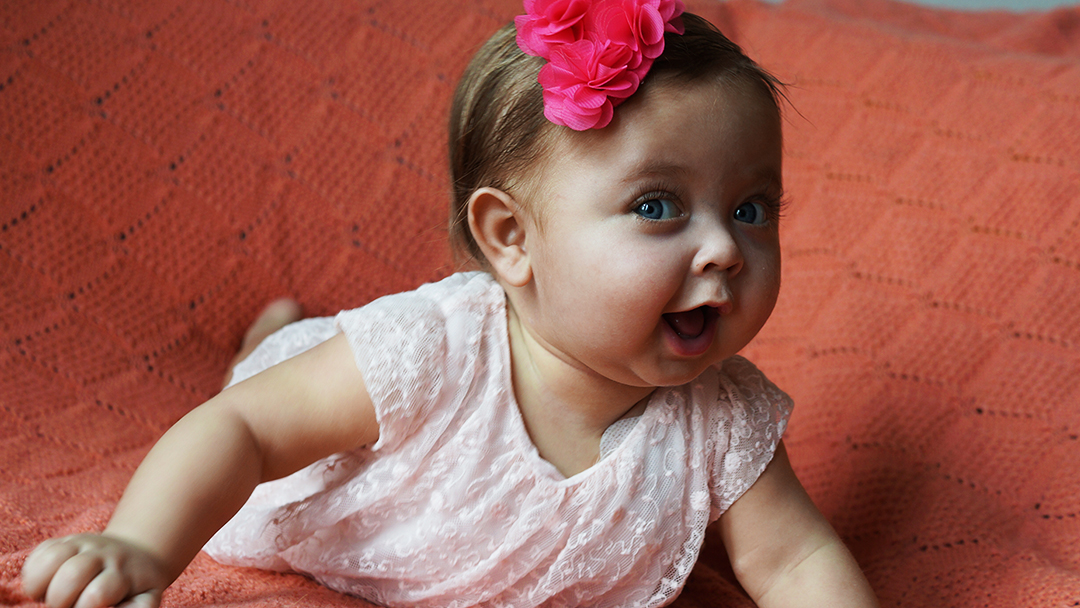 When a local hospital was reluctant to list their daughter for the liver transplant she needed, Melinda Kohlmyer and her husband brought young Hanna to Mayo Clinic for a second opinion. There, Hanna got a second chance at life.

After several busy days in the hospital, Melinda Kohlmyer was enjoying a few quiet moments with her newborn daughter, Hanna, resting comfortably in her arms. She was looking forward to spending some unhurried time together with her baby.

But things changed quickly when a nurse came into the room and told Melinda she had to take Hanna to the neonatal ICU. That unexpected announcement was the beginning of the little girl's journey to Mayo Clinic, where she eventually would receive a liver transplant.

Shortly after Hanna's birth, Melinda noticed her daughter looking a little jaundiced — a thought later confirmed by her care team.

"I didn't think anything of it," Melinda says. "In the back of my mind, I was thinking, 'OK, get her under some lamps, and she'll be fine.' But that wasn't the case."

Instead, Hanna would stay in the neonatal ICU for the next week while her care team performed tests to figure out what was causing her discoloration.

"We just had to live with the fact that eventually she was going to need a liver transplant. That was the only way to save her."

"After a liver biopsy, they determined she was born with a rare liver disorder called biliary atresia, which of course we'd never heard of before," Melinda says.

The medical team told Hanna's parents that a technique called the Kasai procedure might be able to help. It involves connecting the liver to the small intestine, bypassing the liver ducts that don't work properly.

"Unfortunately, that didn't work," Melinda says. "We just had to live with the fact that eventually she was going to need a liver transplant. That was the only way to save her."

As Hanna's health got worse, her parents determined the best place for her to get that lifesaving transplant would be at Mayo Clinic's Rochester campus.

"We finally decided to seek out a second opinion at Mayo because we didn't feel like our local hospital was being proactive enough in getting Hanna listed for a transplant," Melinda says.

When the family arrived at Mayo Clinic, they met with Katryn Furuya, M.D., a pediatric hepatologist. "I knew within five minutes of meeting her that we had come to the right place and that we were going to transfer Hanna's care to Mayo Clinic immediately," Melinda says.

Once that was accomplished, Dr. Furuya and the rest of Hanna's care team wasted no time.

"They proposed a very proactive and aggressive treatment plan, and wanted to list Hanna for a liver transplant right away," Melinda says. "They also explained to us that the healthier Hanna could be before surgery, that would be directly indicative of how well she did postsurgery. And so we wanted to get her on board at Mayo and started with all of that as soon as possible."

"We felt like Hanna's care was always their top priority and that everyone involved was truly interested in saving her life."

"When I saw Hanna for the first time, it was clear to me — given that she had remained jaundiced despite having undergone a Kasai procedure — that she needed to begin her liver transplant evaluation process right away," Dr. Furuya says. "In the meantime, I started her on medication that would help her feel more comfortable and take away the itchiness she'd also been experiencing because of her liver problems."

After Hanna completed her transplant evaluation at Mayo Clinic, her parents had planned to take her home while they waited for a donor liver to become available. But a decline in Hanna's health didn't allow for that.

"She started having so many things go wrong," Melinda says. "She got an extended stomach, the flu, and like four or five other chronic issues all going on at the same time. So we ended up staying at Mayo Clinic."

That turned out to be a blessing in disguise, according to Melinda.

"The most positive thing I saw come out of that was that there were so many different people and so many different departments who came to Hanna's aid," she says. "We had infectious diseases specialists. We could get an ultrasound right there in her room. It just felt like there was such a large team of professionals who were helping her."

Melinda says that, to a person, they all made her feel like Hanna was their only patient.

"I don't know how they do that because I know Mayo truly is a very busy place," Melinda says. "But that's exactly how we felt. We felt like Hanna's care was always their top priority and that everyone involved was truly interested in saving her life."

A key member of Hanna's care team was Charles Rosen, M.D., the surgeon who performed the little girl's liver transplant. "He's our superhero," Melinda says of Dr. Rosen, who is chair of Mayo Clinic's Division of Transplant Surgery. "We get giddy whenever we see him in the hallway at Mayo because he saved Hanna's life. He saved our daughter's life, and he did an incredible job."

Dr. Rosen also did an excellent job, Melinda says, of making sure Hanna's recovery got off to the right start.

"I remember Dr. Rosen walking into Hanna's recovery room at 4 or 5 a.m. the morning after her transplant," Melinda says. "She was asleep, and he tiptoed over, checked her out and gave me a thumbs up. And I was like, 'OK. That's all I need to know.'"

"We always felt safe at Mayo and like someone was always taking the time to really understand Hanna and do what was best for her."

Since then, Hanna's health has improved significantly. "Her color returned to normal within the first few hours of the transplant," Melinda says. "After we were discharged and sent back home, she's continued to make steady progress. She's now 2 years old, and she's just happy and healthy and has so much energy. It's hard to keep up with her now, actually."

Melinda believes the health and vitality Hanna is enjoying wouldn't have been possible without the proactive team approach to her care the family found at Mayo Clinic.

"We always felt safe at Mayo and like someone was always taking the time to really understand Hanna and do what was best for her," she says. "Because of that, we feel like we're getting back to normal now, and that feels really good."

To those who may be considering becoming organ donors but haven't yet taken that step, Melinda has this to say: "Just know that by making that choice, you can potentially help save the lives of many different people — people like Hanna."