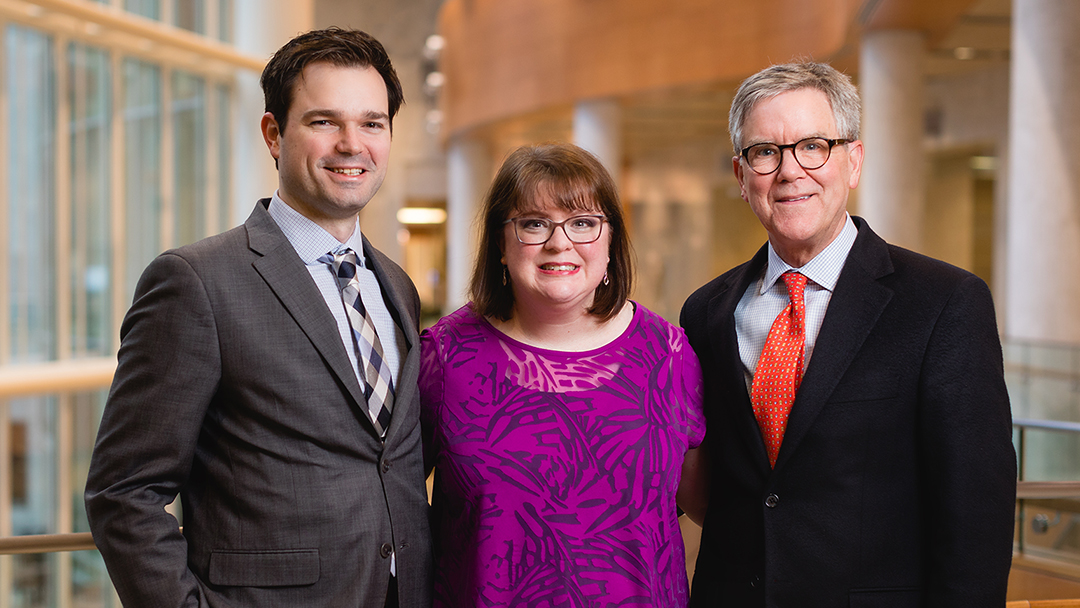 Michelle Griffis battled debilitating headaches for more than a year. But after several neurosurgeries and care from a multidisciplinary team at Mayo Clinic, she's made a full recovery. Now Michelle and her son are back to exploring their world together.

Michelle Griffis has a lot to celebrate this holiday season. After spending two months in a wheelchair in 2017, she's back to walking, driving, and going up and down the stairs with ease. She's returned to work as an administrative assistant for Mayo Clinic's Global Business Solutions after being on leave for 11 months. And, best of all, Michelle can once again pick up her 3-year-old son, Owen, and the two of them are back to relishing their time together.

"Just being able to get down on the ground and play with him is a gift," Michelle says. "I'm so grateful that I'm able to take him to the park and be part of his world again."

Michelle credits the expertise, dedication and compassion of a multidisciplinary team of neurologists, neurosurgeons, physical therapists and occupational therapists at Mayo Clinic with her remarkable recovery.

Michelle's medical difficulties began with terrible headaches that felt like she had a sack of potatoes on the back of her head. The pain prompted frequent vomiting. For the entire month of November 2016, Michelle vomited every day. She could only eat lying down, and her condition forced her to stay in bed much of the time.

After several MRIs and a CT myelogram, a medical team at Mayo Clinic's Rochester campus discovered the source of her symptoms. Michelle's spine was leaking fluid — a condition called spontaneous spinal cerebral spinal fluid leak with intracranial hypotension. Testing revealed the leak was at the base of her neck.

In an attempt to seal off the hole and stop the leak, the team's initial treatment that included several blood patches and fibrin glue patch injections in Michelle's spine. Unfortunately, those measures were unsuccessful.

Michelle then met with neurosurgeon W. Richard Marsh, M.D., to discuss the only other treatment option: surgery. Michelle needed a laminectomy, which involves removing bone from the back of her spine to expose the back of the spinal membrane, known as the dura.

Because Michelle was dealing with family issues that prevented her from having major surgery at that time, she decided to wait to have the procedure. She lived with the debilitating headaches for eight more months. But during a follow-up visit in July 2017, she had an MRI that revealed the spinal leak was getting worse. Michelle and Dr. Marsh agreed to move forward. Her surgery was scheduled for August.

The surgery was the start of a long road back to renewed health for Michelle under the care of Dr. Marsh, as well as neurologic surgery resident Cody Nesvick, M.D., who oversaw Michelle's care while she was in an ICU and during her stay in the hospital's neurology unit.

A few days after surgery, Michelle found she was unable to move her arms or legs. That development required several additional surgeries. One of them involved sewing in a patch to cover the hole in her spine. But those procedures made the difference. In September, she was able to move her toes again. Michelle then was released to the rehabilitation unit, where she worked with physical and occupational therapists for another five weeks.

As Michelle worked to regain her strength and mobility, Dr. Marsh came to visit her regularly. "He's very friendly and caring," Michelle says. "He was an inspiration to me. He's my hero. He never gave up on me."

"This is the best I've felt in years. It's so peaceful and amazing not to have those headaches."

She's also grateful for the thorough care and support she received from the rehabilitation staff.

"They helped me get the strength back in my hands and motion back in my legs," Michelle says. "They showed me how to function while in a wheelchair and how to walk with a walker."

Michelle was still in a wheelchair when she was released from the hospital in October 2017. She spent another six months doing outpatient physical and occupational therapy three times a week. 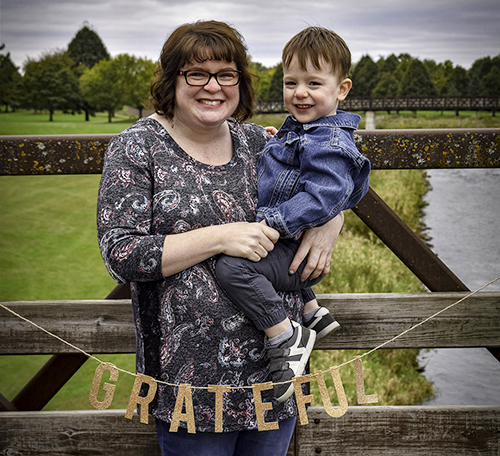 "Everything people take for granted I had to relearn — how to write, how to brush my hair and how to eat. The hardest thing was sitting up," Michelle says. "I had to teach my brain how to send messages to my muscles to move."

Although it wasn't an easy process, Michelle made steady progress. In November, she was able to walk with a walker, and in January, she progressed to walking with a cane.

Today all that hard work has paid off, and Michelle has returned to living the life she loves. She's enjoying being back at work. She's sliding down slides with her son at the park. She's even planning several trips — contemplating a journey to New York City or San Francisco with her best friend, and making arrangements to go to Des Moines for her youngest sister's wedding.

"This is the best I've felt in years. It's so peaceful and amazing not to have those headaches," Michelle says. "Mayo gave me my life back. I can now be an active, hands-on mom with my son again. That means the world to me."