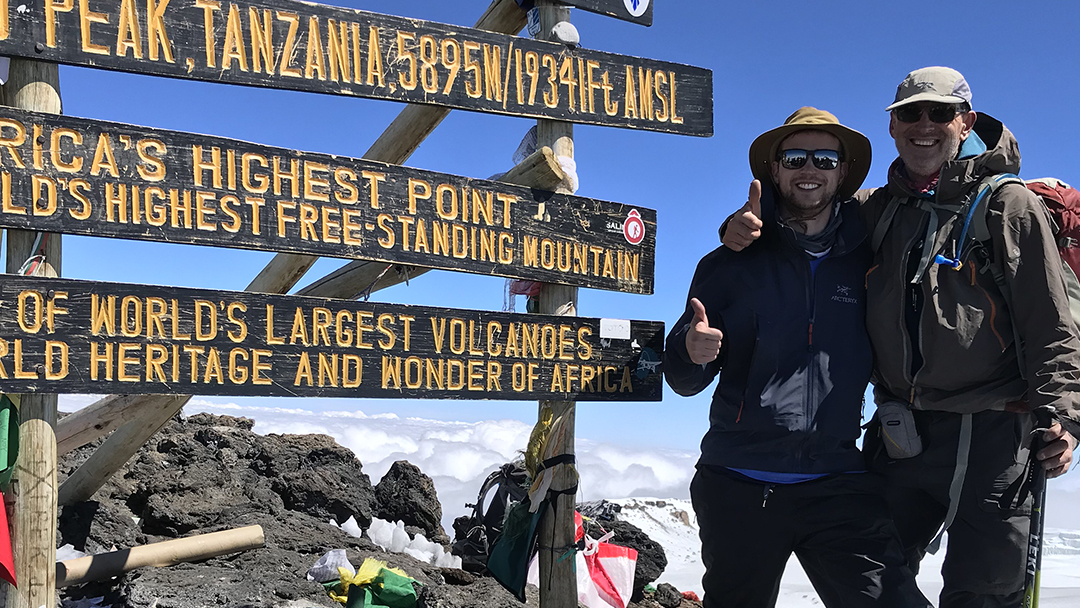 When treatment for a torn rotator cuff uncovered two underlying heart conditions, friends urged Alan Kostrzewa to go to Mayo Clinic for help getting back to his highly active way of life.

Alan Kostrzewa never thought the term "endurance athlete" applied to him until doctors began telling him otherwise. "After talking with them, I guess that's what I'm called," he says.

The label fits. At 60 years old, Alan has been participating in triathlons and other physically demanding competitions for about half his life.

"I've been doing triathlons for 30 years or so," he says. "I do Olympic-style triathlons, and I've also done three half-Iron Man triathlons. In July 2016, I did my first full Iron Man competition. I also do a lot of recreational swimming, hiking and biking."

Given this athletic prowess, it's hard to believe a single drop of water could derail Alan. But in summer 2017, that's what happened. "It was Father's Day," he says. "I was carrying a cooler of ice, and I slipped on a drop of water on our kitchen floor and fell on my right shoulder."

The shoulder already had a minor rotator cuff tear. But because the discomfort wasn't enough to restrict his daily activities, Alan had opted against corrective surgery. "When I fell, I tore it worse, and it did then begin to complicate my life," he says. "Sleeping, especially, became extremely difficult."

An appointment with an orthopedic surgeon in Alan's hometown of Traverse City, Michigan, made it clear the tear now needed medical intervention. "He recommended surgery," Alan says. "I really didn't want to do that, so I did a lot of physical therapy in hopes of avoiding the surgery, but it didn't work."

Alan relented. A month before his November surgical date, however, his body threw him another curve ball.

"I was sitting in my doctor's office during a presurgical appointment, and my heart started beating really quickly," Alan says. "It had done that a few times before, but it always went away. I just thought I'd had too much coffee or something else like that."

His doctor wasn't so sure. "He wanted to do an EKG, so he did one, and then he did another one," Alan says. "Based on the results, he said he then wanted to schedule me for a stress test because he wasn't sure if I was going to be able to have the surgery because of this irregular heartbeat."

Alan would go on to pass that stress test, clearing the way for successful rotator cuff surgery. But his heart issues continued.

"After the surgery, my doctors wanted to put a heart monitor on me to check my heart rate ahead of an appointment they wanted me to have with a cardiologist," he says. "So they did, and I saw a cardiologist in Traverse City who confirmed I had atrial fibrillation and atrial flutter, which I was told wasn't that uncommon for endurance athletes like myself."

After making that diagnosis, Alan's cardiologist went on to recommend he undergo cardiac ablation to correct his abnormal heart rhythm — a procedure he was planning to have done locally until some friends intervened.

"I have a lot of friends who are doctors, and they all recommended I get a second opinion," Alan says.

As Alan began researching his options, another friend stepped in and helped make the decision.

"He'd had a heart procedure done at Mayo Clinic. After I told him about my situation, he couldn't say enough good things about Mayo," Alan says. "He said he'd had a great experience there and that Mayo's Cardiology Department is the best."

A few days later, as he was driving, Alan decided his friend was right. "I pulled off to the side of the road and just Googled 'Mayo Clinic,'" he says. "It was early in the morning when I called, and the operator transferred me to the Cardiology Department right away. I couldn't believe how quickly I got through to someone."

Alan scheduled an appointment for later that month at Mayo Clinic's Rochester campus.

When they arrived at Mayo Clinic, Alan and his wife met with two cardiologists who explained in detail the heart conditions he was living with and how they could fix them.

"I was on a blood thinner at the time, and they said I could stay on that and not have the ablation," Alan says. "But with me being as active as I am, they didn't think that was a viable long-term option. They really recommended the ablation, and I agreed with them."

The procedure was scheduled for the following week. When the day of the appointment came, Alan met the Mayo Clinic cardiologist who would perform the ablation: Peter Noseworthy, M.D. "We talked for a while, and I felt really comfortable with him," Alan says. "He then came back to talk to me right after the procedure was done to explain everything he did."

Dr. Noseworthy told Alan that the ablation had gone according to plan. "We put catheters through his veins and into his heart, and then heated his heart muscle to create scar tissue to prevent the arrhythmia from propagating," Dr. Noseworthy says. "It's a way for us to look for the source of an arrhythmia and then extinguish it, essentially."

Dr. Noseworthy and his team performed the procedure as noninvasively as possible, so Alan could recover and get back home quickly. "I stayed overnight in the hospital the day of the procedure, and then Dr. Noseworthy wanted us to stay one more day before going back home," Alan says.

When Alan and his wife returned to Michigan, he was feeling so good he couldn't wait to ask Dr. Noseworthy how soon his new-and-improved heart could take on the next adventure on his list.

"I told him my son and I had been talking about summiting Mount Kilimanjaro in Africa," Alan says. "He said he'd done it himself and that he didn't think I'd have any problems. But he wanted me to wait until I came back to see him in the spring, so he could monitor me over the next few months to see if I had any more episodes before making a final decision."

Alan experienced one more arrhythmic episode shortly after his ablation. He was in his doctor's office in Traverse City for a physical when he noticed his heart starting to beat rapidly. His doctor sent him the local Emergency Department, where Alan asked the physician who was treating him to call Dr. Noseworthy.

"Dr. Noseworthy explained that what I was experiencing wasn't that unusual for someone who'd just had an ablation," Alan says. "He told them to put a 24-hour heart monitor on me and let me go home. They did, and I've had no episodes since."

Nor did Alan experience any episodes throughout the entire climb to the 19,341-foot summit of Mount Kilimanjaro. He and his son completed the hike on Labor Day, but only after proving to Dr. Noseworthy during a pre-Kilimanjaro high-altitude climb in Colorado that his heart was in good shape.

"I was able to get up and back down the mountain without any issues. I felt really good about that."

"I had no issues on either climb," Alan says. "There were eight of us in our group for Kilimanjaro, and 5 of the 8 needed oxygen at about 18,500 feet, but I did not. The guiding service we were with checked our oxygen levels and our heart rates twice a day during the eight-day trek. I was able to get up and back down the mountain without any issues. I felt really good about that."

With Mount Kilimanjaro successfully behind him, Alan's now preparing for new extreme exploits. "My son and I just registered for another half-Iron Man in our hometown for next summer," he says. "We're also planning to do another high-altitude climb in Colorado, but we haven't decided which one. We've also talked about Patagonia and maybe doing that someday, but we don't have that planned yet, either."

Regardless of where the next adventure takes him, Alan's confident his heart will be ready for it, thanks to the support, care and treatment he received at Mayo Clinic.

"From my very first appointment, I was impressed beyond belief with how everything was scheduled and coordinated between departments and all of my different exams. I couldn't believe how efficiently everything went and how on-time my appointments were," he says. "Mayo was above and beyond anything I could have ever expected."