Turning the Compass Toward New Understanding of Skin Disorders 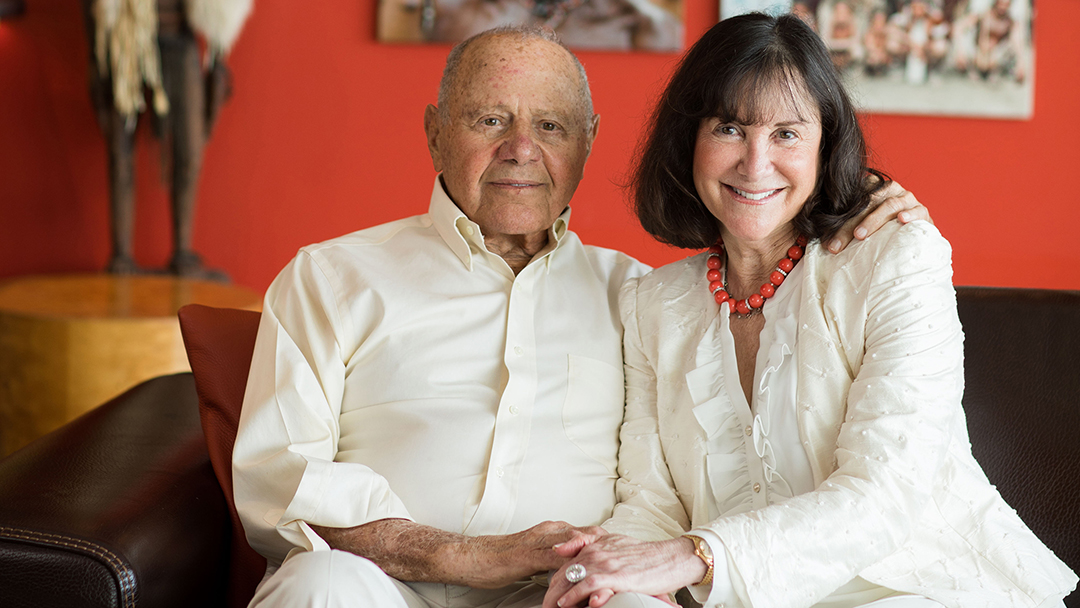 A seasoned traveler, Lou Appignani relishes exploration and discovery. So when he was diagnosed with an inflammatory condition that affects his skin, he and his wife, Laurie, decided to contribute to medical research at Mayo Clinic to help dermatology experts unravel the mysteries behind skin disorders.

As the door opens into Lou and Laurie Appignani's home, the world opens with it. On display are keepsakes from the couple's lifetime of exploring. Most striking is a precisely arranged collection of ceremonial masks from Lou and Laurie's visits to Papua New Guinea in the southwestern Pacific Ocean. Each mask has its own story — stories that Lou happily shares.

By stepping into the unfamiliar through global travel, the Appignanis have come to appreciate the best elements of humanity. "We've been fortunate to have the opportunity to travel," Laurie says. "By immersing ourselves in different cultures, embracing a world of unique identities, we've learned how each of us can take steps to make this a better place before we depart it."

The couple's favorite thumbtacks on the map are pressed on paths less traveled — Outer Mongolia, the Great Rift Valley of Ethiopia, Namibia, Libya and Antarctica, to name a few. But these destinations represent more than just another pinhole. The couple's global experiences drive their humanitarian efforts.

"A life of travel helps you see things in new ways. It's given us a sense of belonging," Lou says. "When it comes down to it, we're all members of the same tribe."

Navigating a different kind of journey

Along with their appreciation for culture and history, the Appignanis are science-minded individuals with a penchant for discovery and critical thinking. In Miami, the city they call home, Lou and Laurie established a University of Miami endowment for the study of atheism, humanism and secular ethics — the first of its kind in the country. The philosophy is considered contrarian by many, but that's how Lou likes it.

"With travel and in life, I stay open-minded to new things and then navigate my own way through it all," he says. "Even from the time when I was very young, I never felt like I was in my own skin by simply doing whatever was expected of me. I was compelled to do more."

As the couple recalls their adventures, Lou says: "You could drop me off anywhere in the world. Just give me a few dollars in my pocket, and I'll follow my compass back home as a better man."

"A life of travel helps you see things in new ways. It's given us a sense of belonging. When it comes down to it, we're all members of the same tribe."

So when Lou had serious health concerns, he trusted his inner compass and followed it to Mayo Clinic. There his care team confirmed a diagnosis of lichen planus — an inflammatory condition in which the immune system attacks parts of the body that it otherwise should defend.

Lichen planus can affect the skin, hair, nails and mucous membranes. On the skin, lichen planus usually appears as purplish, often itchy, flat-topped bumps. In the mouth and other areas covered by mucous membrane, it forms lacy white patches with painful sores. An added concern is that lichen planus may increase the risk of developing a skin cancer called squamous cell carcinoma.

After evaluating his condition, Lou's team of Mayo specialists agreed that a conventional, cautious treatment strategy was the best path to take.

Like many people who have lichen planus, Lou struggles with his symptoms. He says it's almost a perpetual feeling of discomfort, which even disrupts his sleep. But Lou pushes on, and he's become determined to contribute to finding out more about the disorder.

Although lichen planus is common, there's no cure and relatively little active research being done on it anywhere in the world. That's exactly the kind of challenge that appeals to Lou. So he and Laurie decided to make a gift to medical research at Mayo Clinic to improve Mayo's ability to study lichen planus.

"I don't want this disease to define me, and I don't want it to rob anyone else of the life they choose to pursue," Lou says. "Maybe if we can make a difference in one person, we can use that knowledge to help many."

Mayo Clinic's Department of Dermatology and Center for Individualized Medicine will collaborate to advance a creative dermatologic research approach to this enigmatic disorder. The Appignanis' purpose in making this gift wasn't to quicken the pace toward a cure for Lou, but rather to help draw the map to a cure for others.

"In its own small way, we hope this gift will train tomorrow's leaders. Maybe it will even help a promising dermatologist with long-range research ambitions."

Mayo experts will use sophisticated genomic technologies to define relationships between an individual's lichen planus and that person's genome. They will then use what they learn to find the right treatment for each individual. Researchers hope to make discoveries beyond lichen planus alone and unravel the mysteries behind other skin conditions.

"In its own small way, we hope this gift will train tomorrow's leaders. Maybe it will even help a promising dermatologist with long-range research ambitions," Lou says. "I hope this gift helps others see things in new ways, tap into a pool of knowledge not widely known. These are things I also hope personify who I am."

When considering the legacy their gift may have in the future, Lou says: "We are all equal members of planet Earth. I simply want to be known as someone who followed a moral compass across it."

Note: A version of this story previously was published in Mayo Clinic Magazine.