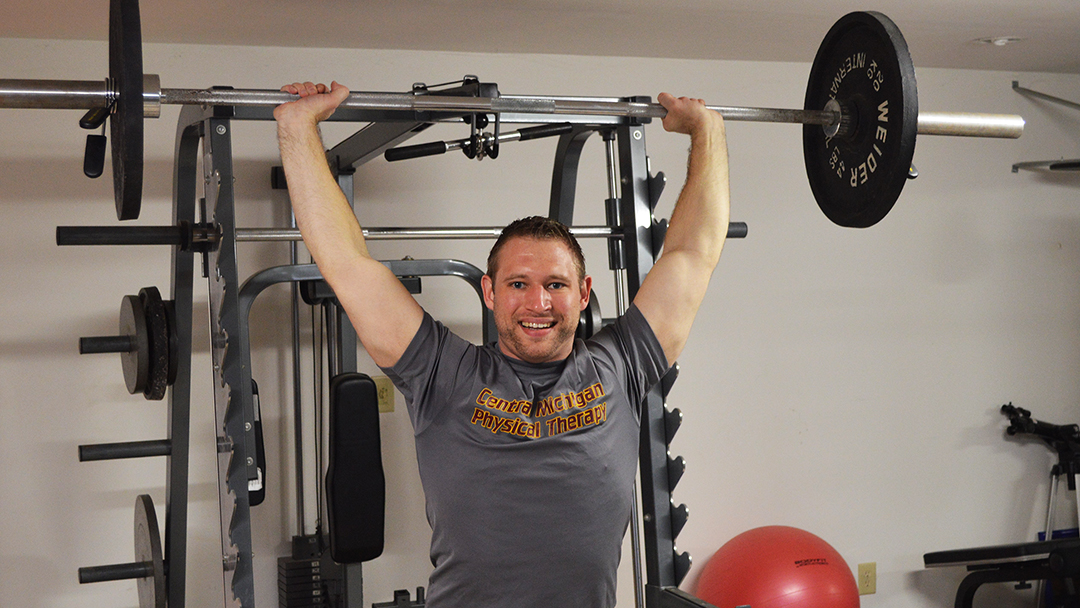 More than a decade after nerve transfer surgery restored mobility to his right shoulder, Peter Rechenberg is not only able to do Olympic lifts, he's using his experience at Mayo Clinic to bring healing to others.

Peter Rechenberg loves his job as a home health care physical therapist working with older adults who have been affected by stroke or who have neurological diseases, such as Parkinson's disease or multiple sclerosis. He's motivated by the positive difference he can make in his patient's lives. Like one of his stroke patients, who he worked with so the patient could stand up and hug his wife for the first time in months.

"To be able to help someone like that accomplish something they couldn't do is very gratifying," Peter says. "It gets me going in the morning,"

At one time, Peter was in his patients' shoes, working with a physical therapist for nearly a year to regain full mobility and function of his right shoulder after undergoing nerve transfer surgery in October 2007.

Peter's surgery and recovery not only restored the high level of activity that was central to the athlete's life, the experience inspired him to become a physical therapist. Now he's helping others through recovery and rehabilitation to improve their quality of life.

During a camping and all-terrain vehicle trip with his dad and two friends in May 2007, Peter, who was 15 at the time, missed a turn and hit a tree head-on with his ATV. Thankfully, he didn't hit his head or damage his spinal cord, but he did sustain serious injury. Peter realized almost instantly that he couldn't move his right arm.

After seeing a local neurologist in Chicago, Peter learned he had a peripheral nerve injury and would need surgery.

"I was a weightlifter and an athlete. Now I wouldn't be able to do the things I'd always dreamed of," Peter says. "To have my capacity to play football ripped away from me was very hard to deal with, and I went through a lot of depression."

"As a teenager, I was blown away by Mayo. It's the best thing you've ever seen."

Peter and his family had a difficult time finding a local neurosurgeon to perform the surgery, which they hoped would restore the function of his shoulder's deltoid muscle. Then his primary care doctor recommended Mayo Clinic. Taking that advice, Peter and his parents made an appointment. They met with Robert Spinner, M.D., chair of Neurologic Surgery, in August 2007 at Mayo Clinic's Rochester campus.

"Dr. Spinner explained that because of my peripheral nerve injury, my shoulder was paralyzed. It was all very scary to hear, but all the time he took to discuss my treatment options and answer all my questions gave me a lot of security and confidence," Peter says. "As a teenager, I was blown away by Mayo. It's the best thing you've ever seen."

The two treatment options available to Peter were a traditional nerve graft or a newer technique called a nerve transfer. The nerve transfer involved rerouting a branch of a nerve from Peter's triceps and attaching it to his paralyzed deltoid muscle to restore function to his shoulder.

"We used to think about how to bridge a gap in a broken nerve with a piece of a nerve from another part of the body — a graft," Dr. Spinner says. "A nerve transfer is a bypass — taking a live wire that's working in one area, bypassing the zone of injury, and attaching the nerve to an area that's not functioning."

Peter decided to move forward with the nerve transfer. He had the surgery on Oct. 12, 2007.

"When I saw how beneficial therapy was for me, I was inspired me to pursue it as a profession."

After four weeks, Peter began outpatient physical therapy two to three times a week. The real milestone came when he went for his six-month follow-up appointment in April 2008. A test to assess the health of his muscles and the nerve cells that control them, called an electromyogram, revealed the nerve transfer was successful.

"It gave me hope, and I knew things would get back to normal," Peter says. "I had new motivation to work as hard as I could in physical therapy."

Peter made great progress and was able to join his high school's lacrosse team his senior year.

"It was life-changing to be able to play sports again," Peter says. "Mayo Clinic is the best of the best. The doctors are the cream of the crop."

A career helping others

Peter graduated from high school in 2009 with career aspirations that grew out of his difficult journey to regain function in his right arm and shoulder.

"When I saw how beneficial therapy was for me, I was inspired me to pursue it as a profession," he says.

Peter began weightlifting again while attending Central Michigan University, where he earned a degree in health fitness and rehabilitative sciences. He then went on to receive his doctorate in physical therapy. Peter says his surgery and recovery have helped him become a more positive, empathetic therapist.

"It's driven me to put myself in the shoes of all the individuals I treat and provide excellent service. I notice body language and changes that others might miss," Peter says. "Just like Dr. Spinner did with me, I take the time to answer all of my patient's questions."

"I've had an amazing recovery and have been blessed with an amazing life post-op. I owe this second chance at life to Dr. Spinner and the entire team at Mayo Clinic."

In addition to having a career he loves, Peter enjoys weightlifting. He has no problem with power lifting and aggressive Olympic lifts, such as the overhead snatch and the clean and jerk — lifts that require a highly functional shoulder.

"I've had an amazing recovery and have been blessed with an amazing life post-op," he says. "I owe this second chance at life to Dr. Spinner and the entire team at Mayo Clinic."

That second chance also removed limits his injury had imposed on him. Recently, Peter worked on a construction project with his dad that he'd wanted to do as a teenager.

"When I got injured, my dad was building a new barn, and I wasn't able to help him," Peter recalls. "This past summer, we were able to build another barn together. It was extremely fulfilling to do this with my dad who, along with my mom, was my biggest supporter and cheerleader."

"It's an exciting time for peripheral nerve surgery," Dr. Spinner says. "Nerve transfers are being used increasingly in a wide variety of peripheral nerve injuries, but also now in the next frontier — spinal cord and even brain injuries."