Saying Goodbye to Chronic Pain, Thanks to Nerve Stimulation 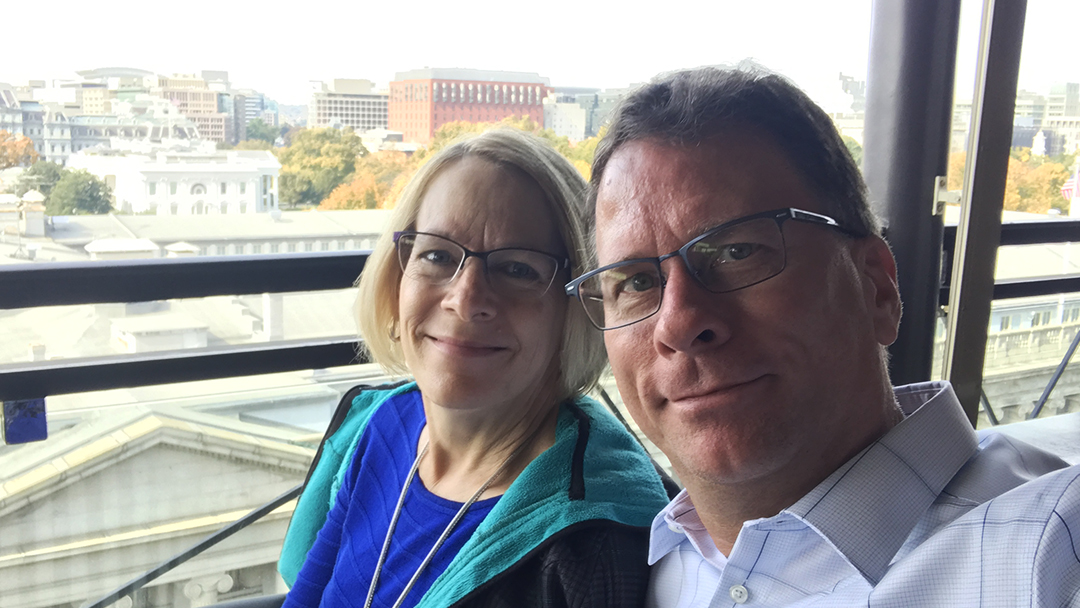 Ron Schlicht thought the chronic pain he'd been living with in his right leg was never going to go away. That began to change, however, after Ron came to Mayo Clinic and met the care team in the Pain Clinic.

Ron Schlicht lived with the effects of meralgia paresthetica for years. "Depending on the day, it would give me different sensations," he says of the chronic pain in his right thigh. "Most of the time, it was very painful if something would rub against my thigh. I do a lot of air travel for work, so I was always brushing up against other people. It was just very uncomfortable."

The condition wasn't a problem just for Ron, but for those close to him, too. "When you're in chronic pain, you brace yourself for it at the start of each day," he says. "That unknowingly makes your body and mind tense. My friends and family were telling me I was becoming edgy and quiet, and that I'd get irritated easily. I was always so focused on trying to ignore the pain and live with the fact that there was nothing I could do."

Years of medication of varying kinds and dosages only seemed to make things worse. "The amount of medication I was taking had been increased over the years by the neurology clinic I'd been visiting in the Twin Cities, and I'd been taking some pretty big doses," Ron says. "I was experiencing side effects from it, too, like having no feeling in my limbs at all — arms or legs — which was a weird existence."

When the pain reached its peak, Ron's local doctor suggested he switch to yet another medication. "I started having some other really odd side effects," he says. "Double vision, strange thoughts and other things like that. I just didn't like the way it was working. I'd reached the point where I really wanted a different opinion and a different solution."

That's when Ron contacted Mayo Clinic. "I called and got an appointment with Dr. Christopher Klein," Ron says. "I'd never met him before. But when I did, I learned the particular nerve that was causing all of my trouble was one of his areas of focus, so I was really pleased about that."

Ron also was pleased with Dr. Klein's approach to crafting a treatment plan. "I went through a series of tests, and I think his ultimate recommendation was going to be surgery," Ron says. "But before we got to that point, he wanted me to undergo a guided injection procedure to demonstrate to me, and to him, that we had the correct nerve."

"He guided a needle in and numbed the nerve, and it totally eliminated the pain. It was a great, great feeling. I remember just being ecstatic after that."

For that, Ron was placed in the care of anesthesiologist William Mauck, M.D., chair of the Department of Pain Medicine at Mayo Clinic's Rochester campus.

"He guided a needle in and numbed the nerve, and it totally eliminated the pain," Ron says. "It was a great, great feeling. I remember just being ecstatic after that. Dr. Mauck came back into the room after the procedure and said, 'I don't even have to ask you if it worked because I can see it on your face.' It was just a wonderful feeling after so many years of constant pain."

There was only one drawback: The relief didn't last. Several hours after the procedure, Ron's pain came back. Undeterred, Dr. Mauck asked Ron what the remainder of Dr. Klein's treatment plan looked like. When Ron said he thought it was ultimately leading to corrective surgery, Dr. Mauck suggested Ron try something else first.

"He said, 'Why don't you give some thought to coming and seeing me here at the Pain Clinic because we have several nonsurgical options for you that we can exhaust before you'd have to start thinking about surgery,'" Ron says. "I checked with Dr. Klein, and he also thought that was a good idea."

Two steps forward, one step back 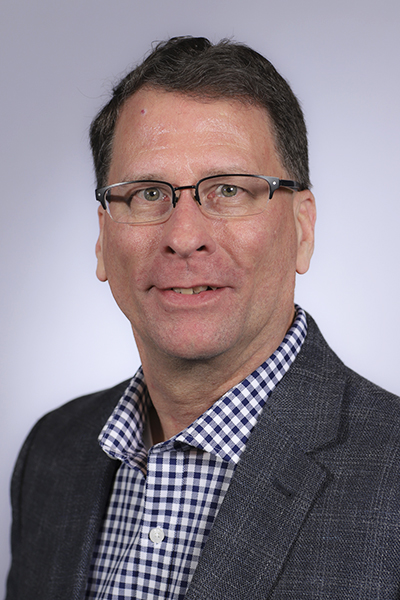 With that, Ron had a new way forward. "Dr. Mauck put me on a path to trying a nerve stimulator as a treatment option," he says. "That was exciting because I hadn't heard of this treatment before. After reading that it can also be applied to treat other nerve pain in the body, and not just meralgia paresthetica, it sounded like something I wanted to try."

But first, Ron wanted to see it for himself. He met with the nerve stimulation team to find out more about the device and how it worked. "After doing that, I decided to go forward with it for myself," he says.

Ron's insurance company, however, wasn't so sure. "After I submitted a preapproval request for the procedure, they came back and said the treatment wasn't medically necessary," he recalls.

Momentarily set back but unwilling to give up, Ron turned to Dr. Mauck and the manufacturer of the nerve stimulation device.

"I was introduced to a patient advocate who helped me put together a stronger, more detailed, medical case, which she then presented to my insurance company," he says. "After they heard that, and saw all of the data and information, they reconsidered and decided they would cover the procedure. What Dr. Mauck and that patient advocate did for me in that regard was a huge help."

That cleared the way for Ron to schedule his nerve stimulation procedure with Dr. Mauck. "To be honest, it didn't go perfectly," he says. "A day or two after I had the first lead implanted, my movements must have changed the lead placement because it stopped working. I came back to Mayo really worried that I'd messed up the whole thing. But Dr. Mauck pulled out the old lead and put a new one in, along with a secondary backup lead."

Once that was done, Ron says it was smooth sailing. "The stimulator functioned really well the second time around," he says. "I was given a remote that I could use to raise or lower the intensity. The guiding theory Dr. Mauck gave me was 'the more was better.' So I kept the intensity as high as I could stand it around the clock to try and get the maximum benefit from the 60 days of therapy."

"I've met a lot of doctors and care providers in my life, but I've never been to a clinic where they're so truly concerned about you and the outcome of your case like they are at Mayo Clinic."

At the end of those 60 days, Ron returned to Mayo Clinic, and Dr. Mauck removed the stimulator from his body. Once the leads were gone, Ron soon noticed something else was missing, too. The persistent, chronic pain that had plagued him for so long had disappeared.

"I didn't have any of the pain anymore," he says. "It's still gone today. I still can't say that without smiling because it's been such a huge change in my life. I can think clearly again. I'm just in a whole new, pain-free world that I haven't seen for the better part of a decade."

Ron says it's all thanks to Dr. Mauck and the rest of his care team in the Pain Clinic. "I've met a lot of doctors and care providers in my life, but I've never been to a clinic where they're so truly concerned about you and the outcome of your case like they are at Mayo Clinic," he says. "Because of that, I'll never go anywhere else for my care."

Is there a Mayo Clinic center pain clinic in Antelope Valley area or close?

Editor’s Note:
Mayo Clinic has major campuses in Rochester, Minn.; Scottsdale and Phoenix, Ariz.; and Jacksonville, Fla. The Mayo Clinic Health System has dozens of locations in several states. You can visit https://www.mayoclinic.org/about-mayo-clinic to learn more about Mayo Clinic
REPLY

This is my story too! I’ve never heard anyone else talk about it before. My doctor recommended the stimulator for me as well, I’ve just started looking into it today. Thank you for sharing, this is a very lonely situation. Most people haven’t heard of it, let alone have it.

Great to hear this ,living in Europe I have had a recurrence of burning pains causing limitation in activity after surgery for prostate cancer so I will mention a referral to local pain clinic to my general practitioner
I wonder is nerve stimulator placed over lower spine or upper leg?

Editor’s Note:
Thank you for writing. Unfortunately, we cannot diagnose conditions, provide second opinions or make specific treatment recommendations through this website. If you would like to seek help from Mayo Clinic, please call one of our appointment offices (Arizona: 480-301-1735 Florida: 904-953-0853 Minnesota: 507-284-2511) or visit https://www.mayoclinic.org/appointments. You might also consider looking into our Mayo Clinic Connect website (http://connect.mayoclinic.org), where you can communicate with others who may have had similar experiences. You can also read Mayo Clinic expert blogs and take part in educational events.
REPLY