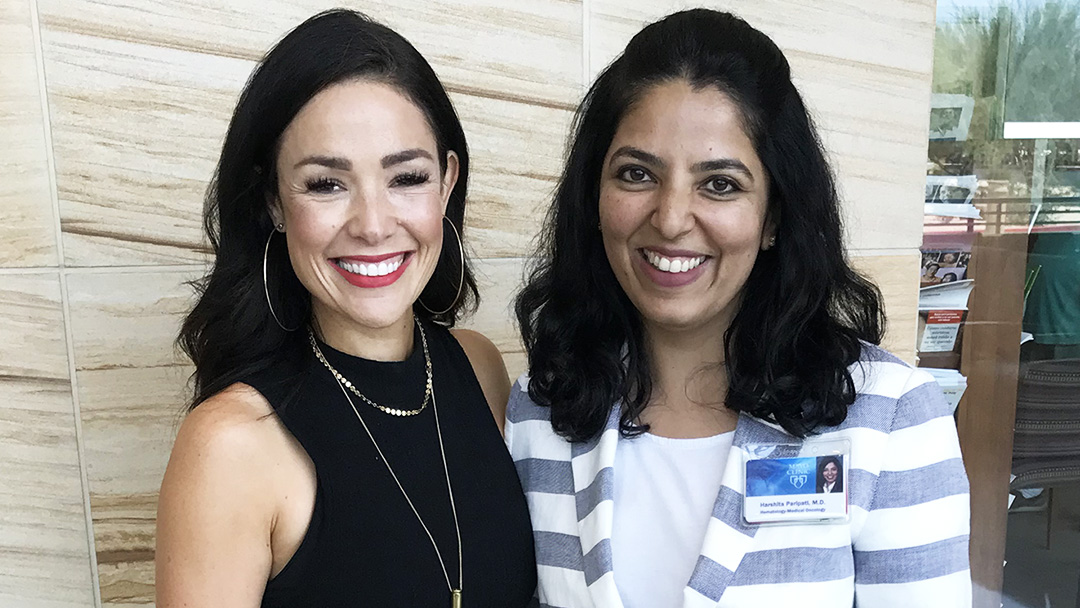 When Lena Spotleson sought treatment for unexplained stomach pain, the 26-year-old was shocked to learn she had late-stage cervical cancer. But the aggressive treatment Lena received at Mayo Clinic eliminated the cancer. Now, in an effort to help others, she's sharing her perspective on being a cancer survivor.

For a long time after Lena Spotleson was successfully treated for cancer, she didn't want to talk about it. The treatment she received at Mayo Clinic in 2006 for advanced cervical cancer was intense and life-altering. When it was over, Lena — who was 26 at the time and newly married — put the painful episode behind her and moved on with life.

It wasn't until years later when she found out someone she knew had been diagnosed with cancer that a light went on inside Lena and sparked a desire to help others walking the path she'd been down.

"I quit teaching and went to work for the American Cancer Society because I felt like I needed to give back," Lena says. "It's important for survivors to share their story, so other people living it are given that hope. They see somebody else survived what they are going through."

From elite athlete to acutely ill

Before she was diagnosed with cancer, Lena — a lifelong basketball player and a high school basketball coach — was fit and athletic. Her annual physical and gynecological exams were routinely normal. But in November 2005, she began experiencing stomach pain and cramping. Each morning, Lena would wake with pain that lasted through the day.

When the pain started, she sought help from a number of medical specialists and received a series of tests, including MRI and endoscopy. But they didn't find anything.

"I was teaching and getting my master's degree," Lena says. "My husband and I had just gotten married a month before, and they thought it was stress."

Lena's search for answers led her to her gynecologist's office. An exam there revealed a mass, which was biopsied. When the biopsy yielded no answers, Lena's gynecologist referred her to Mayo Clinic's Arizona campus.

"Because this type of cancer grows inside, it takes much longer to diagnose. The cancer has a long time to grow before it is picked up."

Lena's Mayo Clinic care team recommended she undergo a procedure to remove abnormal cells from the cervix, called a cervical loop electrode excision. Lena had the procedure, and the results were sent to Javier Magrina, M.D., in the Department of Obstetrics and Gynecology.

When Lena met Dr. Magrina, he told her the stunning news that she had cervical cancer. It had gone unnoticed because, unlike most cervical cancers that grow on the surface of the cervix and are easily detectable, Lena's cancer started growing from inside her cervix.

"Because this type of cancer grows inside, it takes much longer to diagnose," Dr. Magrina says. "The cancer has a long time to grow before it is picked up."

Not only had cancer invaded Lena's cervix, it had spread to her uterus, left ovary and pelvic lymph nodes.

When the cancerous tissue was gone, Lena received chemotherapy and radiation therapy to target any cancer cells that may have been left behind in her pelvis and abdomen.

After Lena recovered from surgery, Harshita Paripati, M.D., in Medical Oncology, and Sujay Vora, M.D., in Radiation Oncology began overseeing her treatment. "We went with an intense chemotherapy and radiation plan," Lena says. "I essentially had both of them at the same time, figuring that I could handle it because I was young, and I was in fairly decent shape."

In addition to her medical doctors, a mental health professional was part of Lena's care team. "My counselor and I talked about how I was feeling, how my treatment was going," Lena says. "She not only listened for my emotions, but if she thought I could benefit from mediation, for instance, she would talk to the doctor about it."

Lena began chemotherapy and radiation treatments a few weeks after surgery. Her chemotherapy infusions were administered every three weeks. The first two went off without major complications. But in early December 2006, following the third dose, Lena started to feel ill. She developed a fever and began to vomit.

Lena's sister drove her to Mayo Clinic Hospital in Arizona where Lena was given IV fluids. Chi-Hui Chang Fox, a nurse who had cared for Lena in the past, was working when Lena came in. She recognized that the symptoms were not normal for Lena. She contacted the on-call physician and voiced concern about Lena's condition. The team decided to do a blood test. After that, Lena went home.

The next morning, Lena was feeling better when the phone rang. The blood test had come back positive for E.coli bacteria. She needed to get back to the hospital right away.

"When I got into hospital room, my heart started to hurt," Lena says. "My nurse got the EKG machine on and put the stickers on my chest. She put the blood pressure cuff on. Lying on the bed, I saw that my blood pressure was 40 over 20. And then I blacked out."

When Lena woke up, she was in the ICU. She was told she had acquired a urinary tract infection that moved into her blood. While she was in the ICU, Lena required a breathing tube. She also was sedated to allow her body to respond to the high-dose antibiotics she needed to fight off the infection.

"The night they intubated me, they told my husband that it didn't look good," Lena says. "All my family and friends came down to the hospital. I don't know if they thought I would make it through the night."

But three days later, Lena began to come out of sedation and surprised her medical team by trying to communicate. Later that day, she was transferred out of ICU. Lena's care plan called for her to receive another round of chemotherapy. Because of her weakened state after being hospitalized, however, the team decided against administering the final round.

In early January 2007, Lena received her first scan following treatment. It came back clear. Three months later, another scan showed no signs of cancer. The same went for the scan Lena received at six months, nine months and a year after treatment. Every scan since then has come back negative.

"I've been sharing my story with anybody that needs to hear it. If it helps one person, that's all that matters."

"It was a very difficult case, and we knew it was a difficult case," Lena says. "But it was never voiced that I wasn't going to live. Dr. Paripati was very hopeful throughout the whole situation and very optimistic about the plan working."

After her treatment ended, Lena was referred to a Mayo cancer survivors clinic where a team helped manage her care and assisted her as she navigated her journey through survivorship. Since then, Lena has thrived. Now, more than a decade after her diagnosis and treatment, she travels the country speaking to others affected by cancer. She offers her perspective on a disease that doesn't discriminate.

"A lot of times when people hear survivors speak, they are mostly older adults, and it's difficult to put a younger face to it," Lena says. "I've been sharing my story with anybody that needs to hear it. If it helps one person, that's all that matters."

To Dr. Paripati, the outcome of Lena's medical journey is truly remarkable. "Lena's outlook and what she's done to raise awareness is amazing," she says. "This is one of the reasons I went into oncology. She is such a success story."