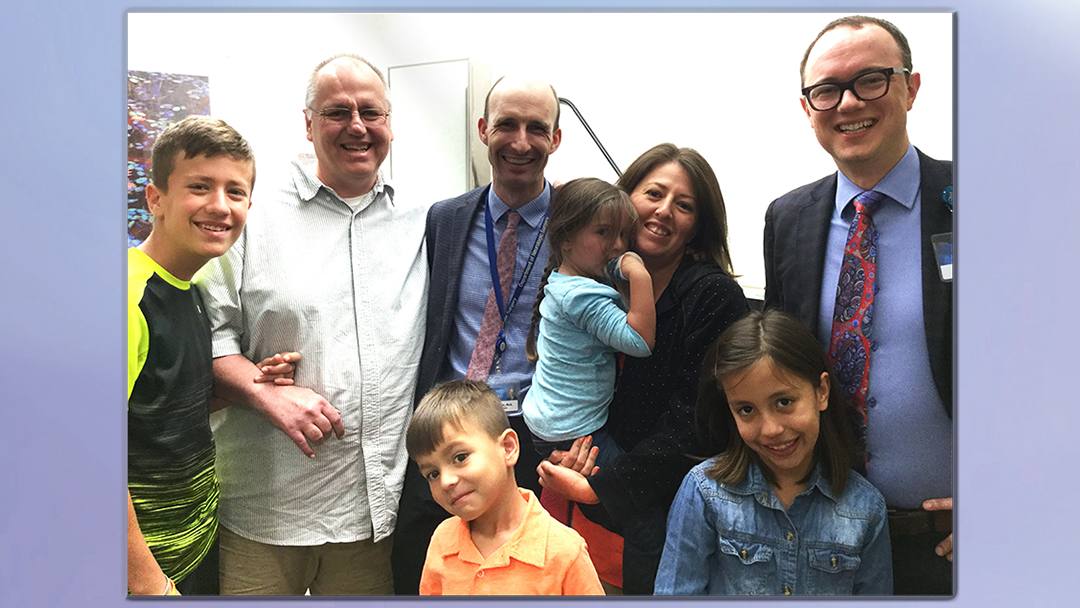 As a pastor, Johann Lochner believes his life's journey is guided by a higher power. Nowhere was that knowledge made clearer for Johann than at Mayo Clinic, where he encountered a team of physicians whose care and surgical talents in removing an insidious brain tumor gave him his life back.

When Johann Lochner boarded a plane bound for his native South Africa to visit a relative who had cancer, he knew he'd be spending time in medical facilities. What the 51-year-old pastor never imagined was that he would be the one requiring care.

Days after landing in South Africa in April 2017, Johann was admitted to the hospital when he began to have problems moving the right side of his body. An MRI showed a mass on the left side of his brain. His South African surgeon diagnosed it as a rare tumor known as PXA, or pleomorphic xanthoastrocytoma.

And the situation only got worse. After a communication breakdown with his care team, Johann was unable to receive treatment for his condition. His wife, Stephanie, was desperate.

"I see my husband declining physically," she says. "I'm in the middle of Africa. No one wants to help us, and I'm having such a struggle to coordinate care."

Then, in early June, Stephanie made a call to the one place she believed could help her husband: Mayo Clinic. Stephanie's call made its way to the Brain Tumor Program at Mayo Clinic's Rochester campus. And it jump-started a whirlwind trip that brought the Lochners back to America, where Johann met a Mayo medical team ready to treat him.

"We had just the most amazing experience," Johann says. "The people there, you can clearly see they are so compassionate. They are not in it for the money, or the prestige or the power. They really care."

Confidence in the face of risk

When the Lochners met Dr. Burns, he told them he hoped that the diagnosis of PXA was correct, but he was concerned that the rate of growth could suggest a more ominous cancer. Dr. Burns recommended Johann have a functional MRI, with special sequences to see the brain fiber tracts. That would allow the surgical team to better assess how the tumor was affecting his brain. What the test revealed helped explain Johann's symptoms.

"The tumor was right in the middle of motor and sensory cortex — the parts of the brain that control voluntary movement and sensation," Dr. Burns says. "Because the tumor had a large cyst, the fibers carrying information to and from his right arm and leg were getting stretched and splayed out around the tumor. That's why he was deteriorating so quickly."

"Dr. Burns is the most gentle and gracious and sympathetic and caring doctor that we've had."

The functional MRI also showed that the tumor was not only pushing on Johann's brain fibers, but it had infiltrated them, which substantially increased the risks of surgery. After the scan, the Lochners met with Dr. Burns. They were hoping to find out if, after the surgery, Johann would recover his ability to move freely. The answer was difficult to hear.

"Dr. Burns is the most gentle and gracious and sympathetic and caring doctor that we've had," Stephanie says. "With as much compassion and empathy that he had, he looked me in the eye and told me that the trauma of going into the brain could be enough to paralyze somebody. He said Johann was probably not going to move his right side for a long time after surgery."

"We needed to decompress the cyst and open things up enough so the cyst wouldn't reform," Dr. Burns says. "We also wanted to remove as much of the tumor as we could safely, without permanently compromising his ability to walk and write. Unfortunately, just operating near these sensitive fibers can be enough to shut them down for a while. I cautioned him that he'd likely not be able to move the right side for some time after surgery and that he'd require some pretty extensive rehab."

Johann and Stephanie knew the news wasn't good. But rather than fear the unknown, they did what they'd been doing since the start of their journey. "We teach our kids that if we win, we praise Jesus. But if we lose, we praise him, too," Johann says. "So when Dr. Burns gave us this bad news, that's what we decided to do. And all of that stuff just lifted off of us."

In the predawn hours of June 20, 2017, Johann arrived at Mayo Clinic Hospital — Rochester, Saint Marys Campus for the operation. "When I went into the surgery room, I thought I was in the movies with all the lights," Johann says. "In South Africa, there was a little operating room with one light. Here they have tens of people all doing different things. There were all these monitors. I was so impressed and thought, 'Hmmm, I think I have a good chance.'"

During the approximately six-hour operation, portions of which Johann was conscious and responsive, Dr. Burns used electrical stimulation to map critical areas of Johann's brain and used Johann's responses to help guide him.

"I told him that it was going to be a team effort in the operating room. With his help, we would work together to determine how much we could safely remove," Dr. Burns says. "He did a fantastic job helping us to know exactly how far we could go before impacting his function."

The combination of Johann's input in the operating room and the space the tumor had created between fibers controlling arm and leg movement allowed for removal of most of the mass. "With his help, we were able to safely remove quite a lot more than initially anticipated," Dr. Burns says.

The expectation was that Johann wouldn't be able to move his right side for several weeks after surgery. That's not how it turned out.

"I walked into Johann's room, and the first thing I saw was Johann using his right leg to push himself up in his bed. With his right arm, he's tugging at his gown and pulling at the blanket and sheets trying to get comfortable," Stephanie says. "It was just another confirmation that God was saying, 'Relax, I got this.'"

The next day, Johann was standing. Within a few days, he was discharged from the hospital. He and Stephanie were driven by friends from Minnesota to their home in Aledo, Texas.

After Johann's surgery, the pathology report for his tumor came back and confirmed Dr. Burn's initial suspicion. Johann's tumor was not PXA, but anaplastic astrocytoma. Molecular testing showed the tumor had the characteristics of a stage 4 glioblastoma, with an unusually high number of genetic mutations. Back home, Johann's team of neuro-oncologists concurred that the tumor was a glioblastoma. To target the remaining tumor tissue in his brain, Johann was started on chemotherapy and radiation.

A few months later, Johann received another shocking diagnosis. He had stage 3 colon cancer. Johann underwent surgery in Texas to remove the cancer from his colon. In February 2018, Johann learned his cancer has spread. A month after that, he received a third diagnosis: skin cancer.

The combination of his cancers led a research team to diagnose him with Lynch syndrome, an inherited syndrome associated with developing different types of cancer. That diagnosis led to immunotherapy — a treatment Johann had first discussed with neurologist Michael Ruff, M.D., during his time at Mayo Clinic.

"Dr. Ruff, way ahead of time, mentioned my brain tumor might benefit from immunotherapy, but that immunotherapy wasn't approved for the brain," Johann says. "Because of the fact that I got the colon cancer, that opened the door for me and allowed me to be put on the immunotherapy."

Stephanie says that throughout their journey discovering Lynch syndrome and treating Johann, the guidance they've received from Dr. Ruff has been invaluable. "He answered so many of my questions and went out of his way to order additional tests when we needed them in Dallas," Stephanie says. "He even returned calls over the weekends."

"It is amazing how God used all of these people to encourage us along the way."

The reason immunotherapy is effective against Johann's cancer is because of its bizarre genetic makeup, explains Dr. Ruff. While typical glioblastomas have 70 or fewer driver mutations, Johann's likely has thousands of mutations.

As a result of the treatment, all of Johann's tumors, including his brain tumor, are either stable or decreasing in size. "We know God has been opening and closing doors, and facilitating every single step we take," Stephanie says.

Even as they left Mayo Clinic, this belief was reinforced. "Dr. Burns came to say goodbye when we were released. I said thank you and that I had an incredible experience," Johann says. "He is an incredible surgeon, and I will never forget this."

"He put his hand up and pointed toward the sky and said: 'I had some help. I think God has more work planned for you,'" Stephanie recalls.

"It is amazing how God used all of these people to encourage us along the way," Johann says. "He has given us the most incredible care, the most incredible doctors. When I look at Dr. Burns and Dr. Ruff, for me, they are servants of the Lord, whether they know it or not."