Reversing a dire disorder on the road to renewed health

Advanced testing at Mayo Clinic Laboratories that confirmed a diagnosis of myasthenia gravis put Lorinda McKinley on the road to renewed health after she nearly lost it all to the rare autoimmune disease. When Lorinda McKinley arrived at Mayo Clinic’s Spine Center in February seeking a second opinion for neck surgery, her eyelids were droopy, […]

Six years ago, Robert Clark thought he was having a stroke. His left eye drooped shut, and he began to have difficulty swallowing. A competitive body builder used to working out six times a week, Robert rarely got sick. So when a local physician dismissed his symptoms, he sought out a friend who worked at […] 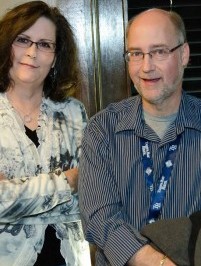 I want to share my story to possibly help another person and to hopefully help others who are still facing their own health unknowns. I struggled for years with extreme fatigue, major skin problems, muscle weakness, escalating eye issues, and a host of other unexplained symptoms. I moved to Georgia with more and more symptoms. […]

Surgery helps Jody get control of her life

Two jobs, four kids and myasthenia gravis — this young mother does a remarkable job of managing a busy life and a serious neuromuscular disease.

Early detection and the right medication help Jim Miller live a normal life. That’s the outlook for most patients who have myasthenia gravis, say Mayo neurologists.