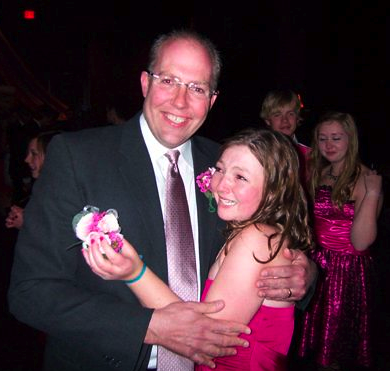 As an 8-year-old girl from Michigan was headed into surgery for a heart transplant, she asked Mike Ackerman -- a pediatric cardiology fellow at Mayo who was part of her care team -- if she was going to live. Dr. Ackerman said, "Of course you're going to live, and I'm going to dance with you at your prom."  Ten years later -- on April 25, 2009 -- Dr. Ackerman flew to Michigan to surprise Stefani Pentiuk at her senior prom to fulfill a promise made years ago.

I work at Mayo Clinic in our Public Affairs Department. Specifically, I work on our media team, helping reporters connect with physicians for interviews. I have had the pleasure of helping share Stefani's story.Update June 5, 2005: Dr. Ackerman, Stefani and her parents were featured live in the studio with Harry Smith on the CBS Early Show this morning. See the segment.

I've known Dr. Ackerman for about three years, working with him on news releases for his research published in scientific journals and on patient stories with the media. What has struck me about Dr. Ackerman is how beautifully he connects with his patients and their family members. His interest in helping them and getting to know them is incredibly genuine -- and his memory of his patients, their specific circumstances and personal stories is amazing. So when he told me about Stefani and that he was traveling to Michigan to surprise her at her prom, I was not surprised.

On the Monday after prom, I talked to Stefani by phone. She told me that when she turned around and saw Dr. Ackerman at her prom, she immediately recognized him. "I would know him anywhere," she said. And then she cried -- which Stefani doesn't do often. "I was so filled with emotion."  After sharing a hug, Stefani's principal announced that a song would be played for Stefani and her friend. Rascal Flatts' "Bless the Broken Road" began playing.  Not long after the dance, Stefani's dad, Perry, drove Mike five hours to Detroit to catch a plane to Florida, where he was speaking the next day. The group he was speaking to even rescheduled the time of Dr. Ackerman's talk, enabling him to be at the prom the night before. Everyone but Stefani seemed to be in on this surprise -- and helping to make it work.  But there's more. Even before Dr. Ackerman entered little Stefani's life, Mayo cardiologist Martha Grogan did. She has vacationed in Stefani's town since she was a young girl herself. In 1999, friends told Dr. Grogan about this young girl who was diagnosed with dilated cardiomyopathy and may need a heart transplant. The friend encouraged her to call the Pentiuks. So on a day when Stefani's mom, Heidi, was very worried about Stefani's health, the phone rang, Dr. Grogan on the other line offering her help as a cardiologist. Eventually, she helped the Pentiuks, including older sister Anna, bring Stefani to Mayo. "I don't feel like I was doing anything special," Dr. Grogan said. "I just wanted to see if I could help."  Both Dr. Ackerman and Dr. Grogan say they didn't do anything special. Many beg to disagree. But part of the reason they say that, I think, is because of who they are personally but also because many people at Mayo -- whether physicians, nurses or staff members at the front desk -- go above and beyond. It's part of the culture. This prom promise story is obviously a one-in-a-million story, but it's also a reflection of what we are empowered to do here in our daily work at Mayo -- to make a difference in a person's life.  And it's a keen reminder to all of us that there is power in words when a person is ill and needs to hear a caring, genuine and hopeful message.  To see more about Stefani's story, see these features on WCCO-TV and KTTC-TV .  If you would like to share this story with friends, use the sharing toolbar below to post to Facebook or other sites, or simply copy and paste this URL into an email: http://bit.ly/Pwvpjn