“Music is oxygen for the soul”

When Mayo Clinic lung transplant patient Larry Rawdon heard the Ritz Chamber Players perform on the Florida campus, he was captivated. As a retired cellist who played on Broadway in shows such as Cats, he has a deep appreciation for the power of music and what it can do to lift a person’s spirits. 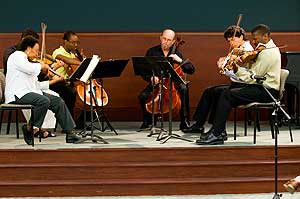 “Music is oxygen for the soul,” says Rawdon. “It has a way of transporting the listener to a better place. For the period of time one is listening to a musical performance, the listener seemingly doesn’t have a care in the world. What better place than a clinic setting to offer this?”

Rawdon has often relied on music to take away the cares in his world over the years. In late 2005 he had a life-saving, single-lung transplant to treat idiopathic pulmonary fibrosis, a terminal disease of unknown cause. Two years later, he needed another transplant due to chronic rejection. In February 2008, he had a double-lung transplant at Mayo Clinic’s Florida campus. 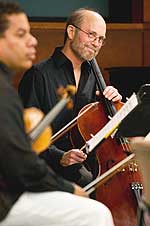 During Rawdon’s time at Mayo, staff who knew he was a professional cellist often asked if he would play at the clinic some day. He said he would and hoped it might be with the Ritz Chamber Players. Through his music connections, Rawdon met Terrance Patterson, director of the Ritz Chamber Players, who invited him to perform at their next Mayo Clinic concert.

So on May 27, Rawdon joined two violinists, two violists and another cellist in Mayo Clinic’s Kinne Auditorium in a performance of Johannes Brahms’ String Sextet in B Flat Major, Op. 18. The music brought a standing ovation from the audience, many of whom were patients, staff and physicians of Mayo Clinic’s Transplant Center. For Rawdon, the performance was much more than beautiful music – it was an affirmation of survival and a celebration of life that brought visible emotional element to Mayo’s Humanities in Medicine program.

The Ritz Chamber Players regularly appear at Mayo’s monthly concerts, which are made possible by benefactor donations. Based in Jacksonville, the group is the nation’s first chamber music ensemble comprised solely of accomplished African-American musicians.

This is an outstanding program and I would like to bring a similar program to my city of Ottawa Canada. I too play the harmonica. Would you please pass on my e-mail to Mr. Rawdon so I might connect with him to establish this venture in Canada?

Hello, Owen. I am Larry Rawdon and I apologize for just now seeing your request at this late date. You are invited to write me at rawdonhall@aol.com . Please write Harmonica in the subject box of your email so that I don’t automatically delete since I am not familiar with your email address. I will look forward to establishing an email dialogue with you about the harmonica program you might even have started by now? —— Larry