New bladder and a renewed joy of life 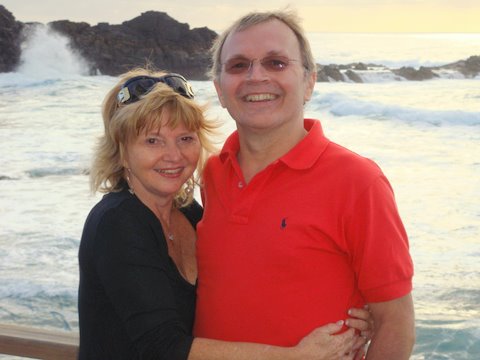 As a semi-retired financier living with his wife on the Isle of Man, Andrew Ashworth is used to frequent travels around the world. Rochester, Minnesota was not on his map until Spring 2009, when he visited a local hospital on the British island for a stomach complaint. He suspected gallstones, which his doctor did find, and then some. Andrew learned that he also had advanced bladder cancer and that he needed a radical cystectomy - removal of the entire bladder.

The news came as a complete shock to Andrew who had no family history of cancer and had never smoked or worked with toxic materials — usual precursors that he could blame for his illness. “We were not mistrusting the doctor, he was very experienced, but we wanted a second opinion.”

Soon after receiving his diagnosis, Andrew was introduced by a friend to Mayo Clinic in Rochester, where he arrived with his wife in June 2009. They were greeted by an international coordinator who guided them to his various appointments and tests that he completed in less than three days. “The efficiency of the testing added to the clarity and the confidence we had in Mayo Clinic,” Andrew said. He then went over the results with urological surgeon, Dr. Jeffrey Karnes, who confirmed the diagnosis of advanced bladder cancer. Dr. Karnes prescribed a preoperative chemotherapy regimen and scheduled Andrew for a nerve sparing radical cystectomy three months later. “He told me that his options were the creation of a neobladder or an ileal conduit at the time of the surgery for his choice of reconstruction”, recalls Andrew.

Traditional ileal conduit surgery involves removing the bladder and creating a small reservoir from a segment of a bowel, and a patient wears a bag over the stoma to collect urine. With neobladder surgery, however, surgeons create a new bladder using a section of a patient’s intestine. A neobladder can act as a near-normal bladder, with the capability for normal bladder capacity and urination. However, it is not for everyone. But in this case, the surgeon, Dr Karnes, felt that, “Mr. Ashworth was the ideal candidate for a neobladder reconstruction at the time of his radical cystectomy.”

Andrew returned home to the Isle of Man for chemotherapy, and he explored options of having his neobladder surgery done in the UK. “The consensus in the UK was mixed, because they said that sometimes the complications that can be brought on by a neobladder would counterbalance the inconvenience of a bag,” he recalls. “I was very keen to not have to live the rest of my life with a bag on my side, and I knew that there was a greater amount of clinical familiarity with the process at Mayo Clinic. This, together with the confidence we had in the post operative care and the administrative process ultimately convinced us to have the operation at Mayo Clinic.”

Andrew and his wife Trish returned to Mayo in late September, and he was scheduled for surgery on October 1, 2009. Although Dr. Karnes was confident in the successful creation of a neobladder, there was still a risk that he would need an ileal conduit and a bag at his side for the rest of his life. Andrew said that the Mayo team prepared him not only for the clinical part but for the psychological aspect of his care, too. “They took care to ensure we understood that there were no promises in this game and that they would do what was possible; however, in the worst case, I would wake up with not what I wanted, but what was necessary, and I appreciated it” said Ashworth. The procedure was successful, and he woke up with a neobladder.

Aside from neobladder surgery, Andrew needed his gallbladder removed, and this was dealt with in the same surgical session. “For clinicians and surgeons to have this collegiate approach is hugely admirable,” Andrew says. “The whole idea of having doctors and nurses who don’t just live for stardom was very evident and is a credit to Mayo Clinic that goes all the way back to the two Mayo brothers and their father more than 100 years ago”.

The recovery has gone well. “A year ago I had advanced bladder cancer. Here I stand, the operation done, fully recovered, just a few scars to show for it, says Andrew and adds: “I was lucky enough to have excellent healthcare, and lucky enough to get through the operation as well without side effects. Perhaps it happens to many people, but having an incident like this in your life changes your focus. I've always been a bit of a workaholic. An incident like this, where you're almost staring death in the eyes - it does make you live for the moment. You value friendships, you value the time of the day. It's very easy to overlook enjoying yourself."

And although living once again with his wife on the Isle of Man, Andrew will always have a soft spot for Dr. Karnes, Mayo Clinic, and Rochester, the city he and his wife Trish grew fond of. “The people were caring and very friendly. The place literally looks and breathes clinical excellence and an understanding of the true meaning of ‘health care’ that is rare these days.”

This story was written by L. Rothering, an intern, and D. Anastasijevic, a communications consultant, in the Department of Public Affairs at Mayo Clinic in Minnesota.