Mayo helps athlete get back on her feet

I was diagnosed with bone cancer in ninth grade. It was December 2006, just before the holidays. For several months, I’d had a bump just below my right knee that the local orthopedic surgeon thought was just an extra piece of bone. My mom is a pediatric oncology nurse, and she was worried it was cancer. I just thought she was being paranoid. 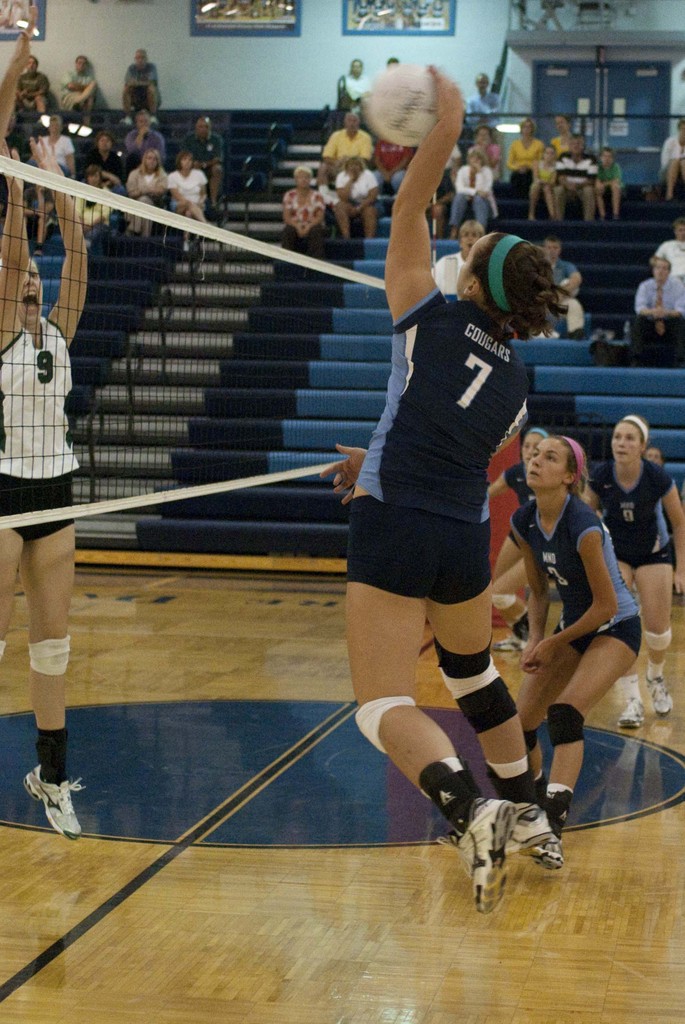 Jenna, #7 on the volleyball court

I didn’t pay the bump much attention until I collided with another girl when we were playing soccer earlier in 2006 , and it began to hurt. I also play volleyball and by that December, the lump got really big and every time I bumped it, I’d see stars. So I decided to have it removed in an elective surgery. The day after surgery, the orthopedic surgeon in Cincinnati told my parents the bump was cancerous. I had osteosarcoma of the long bone (tibia) in my lower leg.

Of course, my parents and I were upset, but my parents’ first concern was that I receive the best care possible. They jumped right on the Internet, talked to physicians, past patients, family and friends. They not only wanted to save my leg, they wanted the best surgical option available.

Given Dr. Franklin Sim’s reputation for orthopedic oncology, we decided that Mayo Clinic was the best option for surgery. We knew that Dr. Sim would build a surgical team that would provide the best outcome. So, we decided that I’d have my chemotherapy near our home in Cincinnati and go to Mayo for reconstructive surgery on my leg.

People often ask me if getting diagnosed with cancer right before the holidays was hard. Actually, it was one of the best Christmases. My grandparents came in from Pittsburgh and stayed for several months to hold down the fort and help with my younger brothers while my parents helped me through chemotherapy.

In March 2007, during a break in my chemotherapy, I came to Mayo for reconstructive leg surgery. Dr. Sim recruited two other surgeons from Mayo to be on the team: pediatric orthopedic surgeon Dr. Anthony Stans and plastic surgeon Dr. Steven Moran.

All three were awesome surgeons. Dr. Stans told me I could go back to being active, although he normally doesn’t advise strenuous physical activity for people who’ve had this type of surgery. He was personable and encouraging. He also kept me checked into reality – he looked at getting me better for long-term activities like one day playing with my kids – not just for sports.

I needed all the encouragement I could get. My first surgery was long (11 hours) and complicated. After Dr. Sim removed the tumor, Dr. Moran removed the fibula from my left leg, and Dr. Stans put it inside a cadaver bone that would help it grow after he put it in place. He added a special plate and some screws to help stabilize my leg. Dr. Moran placed a skin graft over the surgical site to cover the area on my leg.

I was on crutches for eight months while I finished my chemotherapy in Cincinnati. Then my plate broke. I was so eager to get off of crutches and into braces that I might have been putting a bit too much weight on my leg. Luckily, it happened while I was in the hospital elevator.

So I had to have another surgery to repair that in January of 2008. Dr. Stans took some bone from my hip and packed it around part of the bone graft in my leg to make sure everything was healing. He replaced the broken plate with not one, but two new plates and a bunch of screws.

After another seven months on crutches, I had to learn how to walk again. Later in 2008, when I was a junior, Dr. Stans allowed me to play some volleyball as long as I didn’t jump much.

I got to play in my high school’s Ace Out Cancer game. This was a special pediatric cancer research fundraiser that my mom and I organized. The gym was packed with 1,000 fans, and it felt so good to be out on the court again. Our local TV station was there and I was on the evening news.

My senior year, I was able to play the game full-out, but I still was careful. I did not want to go back on crutches! I’m spending the summer as a lifeguard and swimming teacher. I plan to attend Miami University in Oxford, OH, in the fall and major in something that helps kids. I’d like to play club volleyball and intramural water polo there, although I’ve never tried water polo.

I want people, especially kids, to know that even though you have cancer, it shouldn’t stop you. Don’t let it keep you from doing what you love. Just get on with your life. I recently got to spread that word when I was named a cancer ambassador for the Hyde Park Blast. The blast is an event in a Cincinnati park that raises awareness about cancer. It’s held by the CancerFree Kids organization and features a walk and a run, a festival with food and drinks, a bike race and a block party with a band. I was ambassador with another cancer survivor. We started the race and got to speak during the festival.

I credit Mayo with getting me back on my feet again. My three surgeons were great, and Kathy Augustine, who works with Dr. Stans, was so sweet. She said she misses me now that I’m not coming back for follow-up appointments so often. Thank you Mayo!