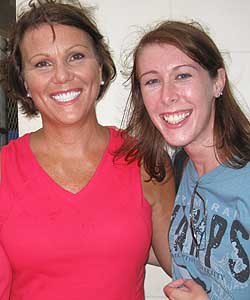 Every year, Mayo Clinic's Public Affairs department welcomes a handful of university students who come to get some real world communications experience. The interns may be assigned any number of tasks, from drafting newsletter articles to handing out programs at events. Here's a report from Lauren Taylor on her first day at Mayo Clinic:

I was excited to begin my internship with the Public Affairs Department at Mayo Clinic’s campus in Jacksonville, Fla. As I drove to the clinic my first day, I thought about what I might do. I expected to spend time working in the hospital and to see patients, doctors and nurses around. But attending a rainy softball practice with a dozen 14-year-old girls, a production crew and a breast cancer survivor? Definitely not on my list of expectations!

Little did I know, the week I chose to start happened to be the same week that production began on Mayo Clinic’s new television commercial. In other words, it wasn’t just the normal whirlwind of activity – with staff juggling multiple meetings, answering pages from doctors and coordinating interviews for news media – but an extra spin that included cameras and a production crew of more than 30.

On location for a video shoot.

Chaos aside, watching the making of Mayo Clinic’s commercial, which featured breast cancer patient Wendy R., was an amazing way to start my internship.

One of the most interesting parts of the production was the truthfulness and accuracy of the commercial. I always assumed that health care commercials seen on television were scripted stories most likely portrayed by actors. And while some might be, Mayo’s production was definitely not. Every last detail was depicted honestly, a quality I found quite refreshing. Wendy’s remarkable story was told by her, her real family, and real Mayo doctors and staff members. In fact, the casting was so meticulous that there were representatives from each and every specialty area that works with breast cancer patients involved in the shoot.

Although I just began my internship with Mayo Clinic, I already feel like I’ve learned so much. Mayo Clinic’s Model of Care is obvious, as is their commitment to honesty and transparency, which I never expected to find “in the real world.” I’m thankful for the opportunity to be a part of this world-class organization.