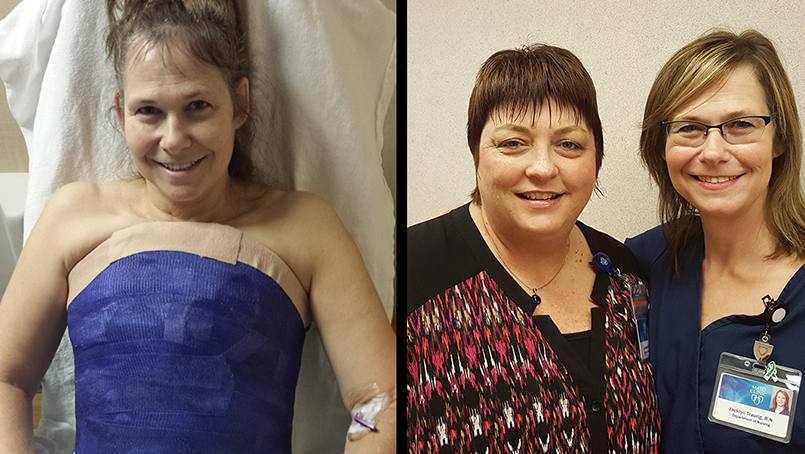 Jackie Traurig in the body cast needed to heal her fractured lumbar vertebra and with the nurse from Orthopedic Surgery who helped ease her nerves, Lori Pierce, who she calls “the biggest angel in the world.”

As a nurse for more than eight years at Mayo Clinic’s Rochester campus, Jacklyn Traurig knew firsthand the value of the organization’s team approach to health care. But although Jackie was practiced at providing quality care, she didn’t truly see just how exceptional Mayo Clinic’s style was until she found herself in back-to-back medical crises.

A fall on the stairs landed Jackie in the Emergency Department with a broken back. Then, while still healing from the first event, Jackie fell again. This time, she slipped in a stairwell and suffered a concussion and broken collarbone. A CT scan following that fall revealed a brain tumor.

Despite all this, Jackie looks for the good in her experiences.

“The whole thing has been a blessing. It really has,” Jackie says. “There is nowhere in the world other than Mayo I would want to be treated. It makes me value being a nurse and being able to be a positive influence on other people’s lives. Seriously, the pride I have in Mayo has tenfold improved. It’s remarkable.”

Jackie’s series of unfortunate events started at home one morning in October 2015. Going down the stairs in the dark, she slipped on a backpack that was sitting on one of the steps. Her legs went out from under her, and she came down hard.

“I screamed and woke up the kids,” she says. “It was excruciating pain, but I could move my legs and was able to turn over.”

Jackie’s 24-year-old son drove her the 31 miles from their home in Wanamingo, Minnesota, to the Emergency Department at Mayo Clinic's Rochester campus. Nurses brought her to an exam room and gave Jackie pain medication. Within moments, Jackie was taken for X-rays. Shortly thereafter, she found herself talking to members of the Orthopedic Surgery team, one of whom, she says, holds a special place in her heart.

“The whole thing has been a blessing. It really has. There is nowhere in the world other than Mayo I would want to be treated.”  — Jackie Traurig

Tests revealed that Jackie had fractured a lumbar vertebra in her spine. Healing would require a corset-like cast. In the cast room, Jackie was placed on a table that arched her, so the cast could be appropriately applied. She says that despite intense pain, the casting team made the procedure bearable.

“When your back is broken you shouldn’t be laughing, but I was, because they were cracking jokes,” Jackie says. “The entire casting team — all of them were phenomenal.”

When the process was over a little more than an hour later, Jackie was wrapped in a bright purple cast.

“As soon as that was on, I could walk,” she says. “I was very nervous, and it was excruciatingly painful at the time. But it was reassuring that I could walk.”

She spent the night in the hospital and was impressed by her care team’s attention to detail.

“Every time I needed something, they were right there,” she says. “They were positive. They were smiling. They were a great team.”

After a few weeks at home recuperating, Jackie returned to work. Although her cast had been removed, she was still wearing a back brace when she fell a second time in early January.

Jackie doesn’t remember what happened. She only knows what people have told her. Another staff member found her face down, unconscious in a stairwell near her work unit at 7 a.m. She awoke as she was being placed into the ambulance, a large bruise on the left side of her head.

“Every time I needed something, they were right there. They were positive. They were smiling. They were a great team.”  — Jackie Traurig

Emergency room doctors ran X-rays as well as a CT scan to check for internal bleeding. They didn’t see any, but they did note a mass on the right side of Jackie’s brain that showed up on the scans. Doctors were initially concerned it might be cancerous, but further testing determined it was a noncancerous tumor called a benign meningioma.

Renewed empathy for others

Surgery to remove the tumor would require Jackie to be placed on her injured side and her shoulder joint to be immobilized during the procedure. Her neurosurgeon Ian Parney, M.D., Ph.D., wanted to give Jackie’s shoulder bones an opportunity to mend before the operation.

Not quite four weeks after being discovered, the tumor was removed.  But before the surgery, there was another important consideration.

“Dr. Parney literally just shaved an arc of my hair, just enough for him to cut my scalp and skull, because he knew my son was getting married in May, and he didn’t want to shave my whole head,” Jackie says.

Three weeks after surgery, Jackie went back to work on restricted duty. In September 2016, she returned to working full-time.

Jackie says her personal experiences have enhanced her nursing practice.

“I just have so much more empathy and compassion for people who need assistance. I can relate and focus on the fact that nobody wants to be in this position, nobody’s asked for it, and you just need to listen," she says. "A lot of times, that’s all people want: someone who’s going to listen and let them verbalize their feelings. Because a lot of times, when you say them out loud it’s not as scary.”