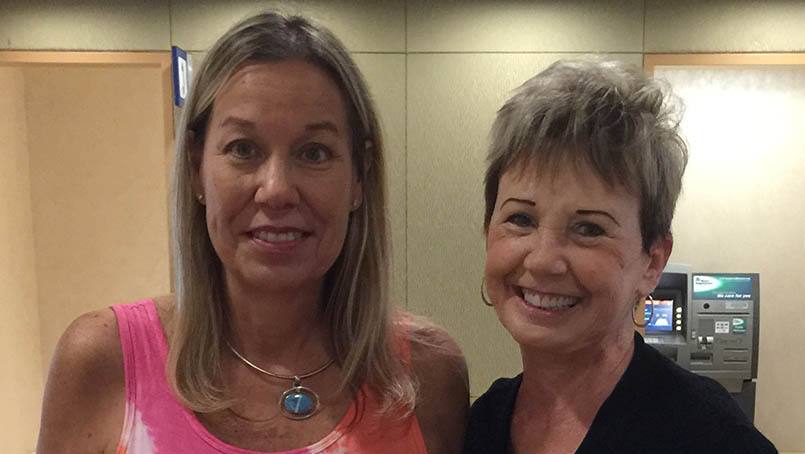 The day before Norma “Kay” Orr was scheduled for a living donor kidney transplant at Mayo Clinic, she needed one more blood test. The Palm Coast, Florida, resident was in line to receive a kidney from her niece, Jamie.

Jamie Rogers had volunteered to be a living donor when she found out in early 2016 that her aunt would need a transplant. Kay’s kidneys had scarred due to glomerulosclerosis and interstitial fibrosis.

“I have been through some tough times in my life, and Kay and her husband were always there for me. I never gave it a second thought,” says Jamie, who drove from Robbinsville, North Carolina, for the procedure, which was scheduled for July 26, 2016, at Mayo Clinic’s Florida campus.

“Jamie and I have always been very close,” says Kay. “As soon as she heard I needed a transplant, she said ‘I want to be the one.’ And that was great, since none of my four children could be the donor.”

The results of that final test, however, showed that Kay had newly formed antibodies in her body that could harm the kidney she was to receive from her niece. Their plans, and Kay's best hope for a transplant, appeared to be in jeopardy.

Though both women were devastated by the news that the planned donation could not happen, Mayo Clinic transplant coordinator Rhonda Rose presented a possible solution. Rose explained that the women could join the paired kidney donation program.

The program uses a database shared among Mayo Clinic campuses in Arizona, Florida and Minnesota to identify donors who, although not compatible with their intended recipients, may be compatible with other recipients. A pair — an incompatible donor and his or her recipient — is entered into the database, which searches for another pair that matches with them.

“I did this to be able to save someone. How could you not? It was a strong feeling that this was something I wanted to do.”  — Marilyn Kinney

“Another important benefit,” says Dr. Mai, “is that it can even help recipients with compatible donors who may not match their recipient with respect to age, infection risk or kidney size to find a living donor kidney that better meets their needs.”

Since 2007, more than 240 patients have received transplants at Mayo Clinic hospitals using paired kidney donation. The average wait time for finding a paired donation match is between three months and a year. That’s much shorter than the average four to six years recipients spend on the transplant list waiting for a deceased donor kidney.

What it meant for Kay and Jamie was that if Jamie gave a kidney through paired kidney donation, her aunt would get a kidney on the same day from another donor in the program.

“I don’t think she could have survived the wait physically or emotionally otherwise,” Jamie says. “We signed the papers the same day.”

Almost a week after Kay and Jamie’s living donation transplant had to be canceled, Marilyn Kinney was approved to donate a kidney to a friend of one of her closest friends. Marilyn was motivated to help in part because of a history of kidney disease in her own family.

“I did this to be able to save someone. How could you not? It was a strong feeling that this was something I wanted to do,” says Marilyn, who lives on the island of Matlacha on the west coast of Florida.

Marilyn had spent a year preparing to be a donor. She went through tests at Mayo Clinic’s Rochester campus, where her recipient was registered. She got her high blood pressure under control, and she had surgery to remove her ovaries due to a noncancerous growth.

“Everyone at the Mayo Clinic in Rochester was so wonderful. It was such an easy process,” Marilyn says. “It was a great experience.”

“Meeting her was very emotional and sweet. I told Marilyn she was an angel sent from heaven. We were both crying.”  — Kay Orr

Marilyn spent a couple of months healing and recovering from her surgery. But by the time she was approved for the transplant surgery, the recipient had found another donor. Marilyn could have gone home and accepted that despite her best intentions, being a living kidney donor wasn’t in her future.

Instead, she approached one of the transplant nurses and said, “I went through this whole process. Who needs a kidney?”

The nurse told Marilyn she could become an altruistic donor: a donor who gives a kidney to someone he or she doesn’t know. Marilyn agreed to be put on the paired kidney donor list.

She didn't have to wait long to get her chance to give.

“I got a call from the Mayo Clinic in Jacksonville several weeks later, and they said, ‘We may have a patient here,’” Marilyn recalls. “I felt an overwhelming excitement that I was going to be able to continue this process of being a living donor.”

On Sept. 1, Kay got the call she had been waiting for — a donor had been found. It had only taken six weeks from the day of the cancelled transplant.

“I just thanked the Lord that I was going to get a kidney,” she says.

Surgery was scheduled for Sept. 22. Jamie and her family would accompany Kay to the hospital, where Jamie would also have surgery to remove one of her kidneys, which would go to another recipient in need of a kidney.

Going into her surgery, Kay didn’t know anything about her donor. But while she was recovering in the hospital after transplant surgery, however, she had an opportunity to meet Marilyn.

“I just wanted to know who it was and to be able to tell her what a wonderful person she was,” Kay says. “Meeting her was very emotional and sweet. I told Marilyn she was an angel sent from heaven. We were both crying.”

The two women exchanged contact information and both returned home to continue recovering.

Jamie also went home to recover. She says she didn’t feel any different having just one kidney, but was grateful for the opportunity to give, even if it wasn't her own kidney that went to her aunt. Her gift, through the paired kidney donation program, meant that her kidney would go to another recipient in need, and would allow her aunt to find a better match and get a donor kidney best suited to her.

Two weeks after the transplants took place, in early October, Marilyn reached out to Kay. She’d been thinking of her a lot, in part because of mail she’d received.

“I started getting bombarded with cards from Kay’s family. Everyone kept thanking me for giving them more time with her,” Marilyn says. “I cried every time I read one. They were tears of joy."

The following week, Marilyn drove to Jacksonville for a follow-up visit, and the two women met again.

“Kay was so excited. When she met me at the hospital, she gave me the biggest hug and said, ‘I love you so much.’ We sat and chatted for an hour,” Marilyn says. “She’s such a wonderful person, and I just kept telling her ‘Jesus loves you, and this is a gift from him.’ I feel so blessed. I really do. To me this is the ultimate, to be able to donate and help someone.”

“This has been an awesome journey. I am so very glad that I donated and very happy with how everything has turned out. It’s wonderful to see the circle completed.”  — Jamie Rogers

To Kay, Marilyn is now part of the family. And she, along with niece Jamie, is the reason Kay can now look forward to celebrating her 70th birthday, as well as meeting her new twin great-grandchildren who will be born soon.

“I can’t imagine not meeting the person who gave you more life and thanking them. It just felt right,” Kay says. “I think all the time ‘Why would a stranger do this?’ I think God had a hand in it.”

In addition to being grateful to Marilyn and Jamie, Kay also is thankful for the team at Mayo Clinic that presented the idea of paired kidney donation to Marilyn.

“I hope more people step up and consider doing this so others can live,” Kay says. “I don't think a lot of people know about the paired kidney program.”

Looking back on the experience, Jamie, too, is glad she had the opportunity to participate.

“This has been an awesome journey. I am so very glad that I donated and very happy with how everything has turned out,” she says. "It’s wonderful to see the circle completed.”

Can you give me detailed info on the donor testing process, time, pain.. Etc. I am willing 4 of us are willing but my sister says that she does not want to put anyone through that pain. Shoot, i am on the bone marrow donor list for anyone i do not know… I know that’ s painful. Please give me some info for ammo, so we can dispell the excuse. Pain! Does she not realize how much pain it causes everyone to see her in such pain? How much it would devastate everyone that loves her, if we lose her? She thinks that she is being unselfish. I say the opposite / to “save us from pain” is causing all of us distress. Its kinda like salvation. God says i give my son that you may live. You respond, no, i cant accept that.

You can learn more about the living-donor transplant process at Mayo Clinic here: https://www.mayoclinic.org/departments-centers/transplant-center/living-donor-transplantation/gnc-20203911