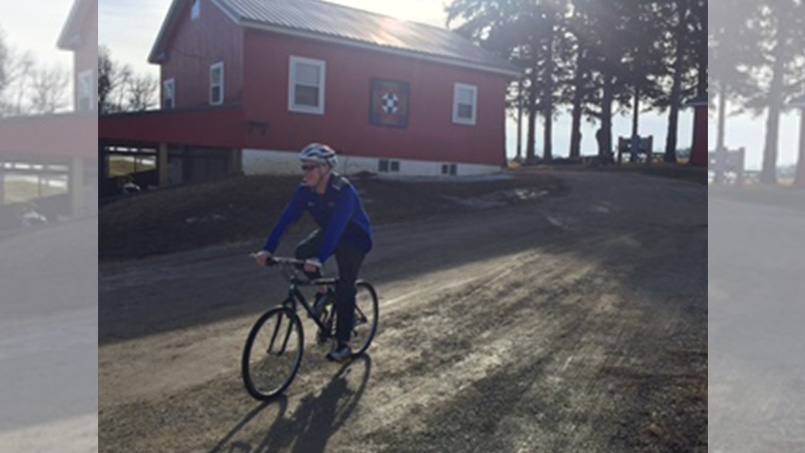 Steve Shank knows what it's like to face an uphill climb. Despite being legally blind and affected by albinism, he has been an avid bicyclist for years, competing in 100-mile rides on the rolling hills of Iowa. The arduous contests challenged Steve physically and mentally, giving the Iowa City native an ability to endure difficult situations.

Beginning in 2015, that endurance was put to the test — one that tried every ounce of strength Steve had.In the fall of that year, he discovered his lungs were failing due to the same mutated gene that caused his blindness and albinism. His only chance of survival was a double-lung transplant.

No route to lung transplantation is easy. But Steve's journey, which began with shortness of breath and ended at Mayo Clinic's Rochester campus, intensified early when his lungs stopped working. Unable to oxygenate his own blood, Steve required life-sustaining ECMO, or extracorporeal membrane oxygenation. The treatment involves continuously pumping blood through a machine — a sort of artificial lung — to remove carbon dioxide and add oxygen. But the treatment is not without risk.

"ECMO is a highly beneficial, life-saving procedure, but has a significant risk of complications," says Hiroshi Sekiguchi, M.D., a Mayo Clinic Pulmonary and Critical Care Medicine physician who was part of the multidisciplinary team that cared for Steve during his hospitalization. "People can get complications while on ECMO that make them non-transplantable."

Steve's organs and muscles, however, withstood the therapy. He continued the treatment for 35 days until suitable lungs became available for a transplant, which took place Oct. 23, 2016, and put him back on the path to a normal, active life.

Steve's path to his transplant began around his 40th birthday in September 2015, when he started experiencing unusual shortness of breath. First, a climb up bleacher stairs at a football game set him to panting. Next, an 11-mile bike ride sidelined him.

"I had to stop three or four times, which is very unusual for me," Steve says. "At that point, I started to get more worried about what was going on."

An appointment with an Iowa City pulmonologist led to an X-ray. That led to a CT scan and an ensuing diagnosis of pulmonary fibrosis. Steve's doctors said the pulmonary fibrosis could be spontaneous or genetic, with a rare genetic condition called Hermansky-Pudlak syndrome being a possible diagnosis.

With that in mind, Steve's wife, Caren, contacted the nonprofit Hermansky-Pudlak Syndrome Network. Due to the rapid, progressive nature of the disease, staff there encouraged Caren and Steve to start looking for a medical center that could do a lung transplant.

"I knew in my gut that we needed to go to Rochester," says Caren, who grew up in the city. "I knew the culture, and I knew it was the best place to be."

"I knew in my gut that we needed to go to Rochester. I knew the culture, and I knew it was the best place to be." — Caren Shank

The decision to head to Mayo Clinic was cemented when Steve's employer offered him a position in one of its stores in Rochester. Steve and Caren moved, and he started his job in August 2016. Appointments were made for him at Mayo Clinic to go through the pre-transplant evaluation to determine if he was a candidate for a lung transplant.

After just five shifts at his new store, Steve's blood oxygen saturation decreased beyond what could be supported at home. On Sept. 6, Caren took Steve to the  Emergency Department at Mayo Clinic Hospital — Rochester, where he was admitted for what became a 79-day stay.

In addition to treatment for his lung condition, Steve also underwent genetic testing at Mayo Clinic. It confirmed Steve had Hermansky-Pudlak syndrome. That knowledge has empowered Steve's family to educate others about the condition.

"Having documentation about Steve's story allows other people to take it to their doctors or present their case to be a transplant candidate," Caren says.

According to the Hermansky-Pudlak Syndrome Network, only 18 other individuals with the disease have received lung transplants.

"There was a small group of people around the country really cheering for Steve and excited for him," Caren says.

During the two weeks the transplant team was evaluating Steve, his lung deterioration accelerated. Steve's case was accepted for transplant the day it was presented to the transplant committee. As the Shanks had hoped, Steve's name was placed on the transplant waiting list.

But immediately following that step forward came the news that more extreme measures were necessary to keep Steve's blood oxygen at life-supporting levels. It was then that Steve began receiving ECMO, which is administered in the hospital's intensive care unit under constant supervision. During that time, in order to maintain strong muscle tone for the transplant, Steve needed to remain active.

"He'd work out a couple of times a day," Caren says. "We'd blare the music and start cheering. And Steve just had this drive in him. People would be like, 'You've got to do this, you've got to keep moving,' and he'd do it. It was amazing what he had to pull from deep within to keep moving forward to transplant."

With each passing day, Steve grew weaker. By the end of the treatment, simply standing for two minutes would exhaust him for hours. After a wait of more than a month, the Shank family was informed lungs were available, and Steve could have his transplant.

"It is amazing that I was that far down and came back from it. I couldn't even stand up after the transplant. I was so weak. But when I took 35 steps, and a couple of days later 100, that progress was amazing." — Steve Shank

"It was just amazing to see how excited everyone was," Caren says. "Steve's brother and I called our close family and friends to share the news, and it was fun to personally give those updates to our loved ones."

After the surgery, the difference in his condition astounded Steve.

"It was so easy to breathe," he says. "It is amazing that I was that far down and came back from it. I couldn't even stand up after the transplant. I was so weak. But when I took 35 steps, and a couple of days later 100, that progress was amazing."

As she looks back on their experience at Mayo Clinic, Caren is convinced the clinic's Lung Transplant Program and the care team saved Steve life.

"We know that if Steve wouldn't have gotten this level of care as quickly as he did, Steve wouldn't be here today," she says. "There's nowhere else we'd rather be."