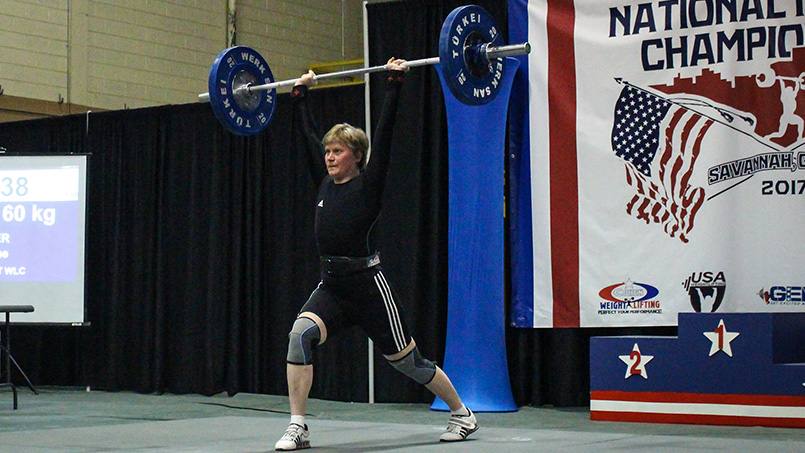 When she was diagnosed with breast cancer, Marianne Huebner feared her days of competitive weightlifting were over. Her care team at Mayo Clinic had other ideas.

Marianne Huebner, Ph.D., was just a few months into trying the sport of weightlifting when she discovered a small lump on one of her breasts during a self-exam.

"I thought it was a cyst, so I didn't do anything right away," she says. Instead she waited until her upcoming annual health exam before mentioning it to her primary care physician. "I was then sent for a biopsy, and it turned out to be cancerous."

An associate professor of statistics and probability for Michigan State University, Marianne had spent a considerable amount of time analyzing breast cancer-related data. During her time as a senior associate consultant at Mayo Clinic, she was part of a research collaboration with Mayo surgeons. That research, however, did little to prepare Marianne for her own breast cancer diagnosis.

"At the time of a cancer diagnosis, one experiences an onslaught of information, uncertainty and confusion," she says. "There were so many questions I'd never thought about before."

One of the first questions that ran through Marianne's mind was not of her immediate health or treatment plan. "My initial reaction was, 'Oh, no!'" she says. "'How can I possibly do weightlifting now?'"

The quest to find an answer to that question began when she reached out to some of her research associates and friends at Mayo Clinic shortly after her diagnosis. "After talking with them, I decided that I wanted to come to Mayo Clinic for my treatment," she says.

There was one collaborator in particular Marianne had great trust in to give her the best option for treatment, as well as to help her get back to the weightlifting lifestyle she'd come to love: James Jakub, M.D., chair of the Division of Breast, Endocrine, Metabolic and Gastroenterologic Surgery at Mayo Clinic's Rochester campus.

"I knew I'd be in very good hands with Dr. Jakub," Marianne says. "He is a very careful and thoughtful person."

During her first appointment with Dr. Jakub, Marianne says it was helpful for her to be able to talk research with him.

"I had a whole list of questions for him. Dr. Jakub went out of his way to try to alleviate my fears." — Marianne Huebner

"The weekend after my diagnosis, I spent a lot of time systematically reviewing breast cancer publications, so I'd brought summaries of research papers with me to Rochester," she says. "It was very helpful to me to be able to talk to him about that, and about some of the breast cancer research projects we had done together. I knew he'd be the perfect person to perform my surgery."

That surgery — a bilateral mastectomy — was arranged quickly, but not before Dr. Jakub and others at Mayo Clinic made sure Marianne had all of her questions answers and her concerns addressed.

"I had a whole list of questions for him. Dr. Jakub went out of his way to try to alleviate my fears," she says. "I thought I was going to have to give up my plan of competing in the world championship for sure. But when Dr. Jakub said that maybe we could still make it happen, it gave me hope for the first time since my diagnosis."

Back in the gym 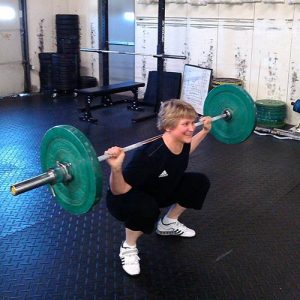 Also providing Marianne with hope was the support she received from those who came to visit her.

"Everyone at Mayo was wonderful," she says. "I very much appreciated that my friends and collaborators from Mayo stopped by or kept checking up on me electronically. I was in excellent hands."

Marianne says that her foremost desire was to get back into the gym quickly.

"I was particularly concerned about returning to exercise after my surgery, and Dr. Jakub was super helpful with that," Marianne says. "After my surgery, he arranged for an appointment with Dr. Andrea Cheville in Physical Medicine and Rehabilitation. She's an expert in physical activity after breast cancer surgery, so this was a very interesting appointment for me and very helpful in thinking about and designing my rehabilitation program."

"I was back in the gym within two weeks doing back squats. That was so exciting for me, and as my progress continued, my excitement grew." — Marianne Huebner

"I could begin doing things like shoulder stretches and core exercises within three days of my procedure," she says. "I was back in the gym within two weeks doing back squats. That was so exciting for me, and as my progress continued, my excitement grew."

And back to competing

After surgery, Marianne was not only back to participating in weightlifting competitions, she was competing at a very high level.

"I was continually getting stronger and was able to compete in the World Master Championship in Europe just five months after my mastectomy," she says. "I lifted well enough to earn a fourth-place finish. A month later, I achieved second place at the American Masters Weightlifting Championship."

Marianne has gone on to compete in several more national and international competitions since then, including the National Masters Weightlifting Championship and the International Women Weightlifting Grand Prix. Most recently, she took home a gold medal in the American Open Series.

"I kept thinking, 'When I get to Mayo, I can relax because I know I'll be in excellent hands. And I was. The philosophy of 'The needs of the patient come first' really shows through in all of the care you receive." — Marianne Huebner

"I feel awesome right now," she says. "I'm back to setting new personal records at weightlifting competitions. I feel like I'm getting stronger and stronger."

Marianne knows just who to thank for helping her get back to that point.

"I kept thinking, 'When I get to Mayo, I can relax because I know I'll be in excellent hands. And I was," she says. "The philosophy of 'The needs of the patient come first' really shows through in all of the care you receive."