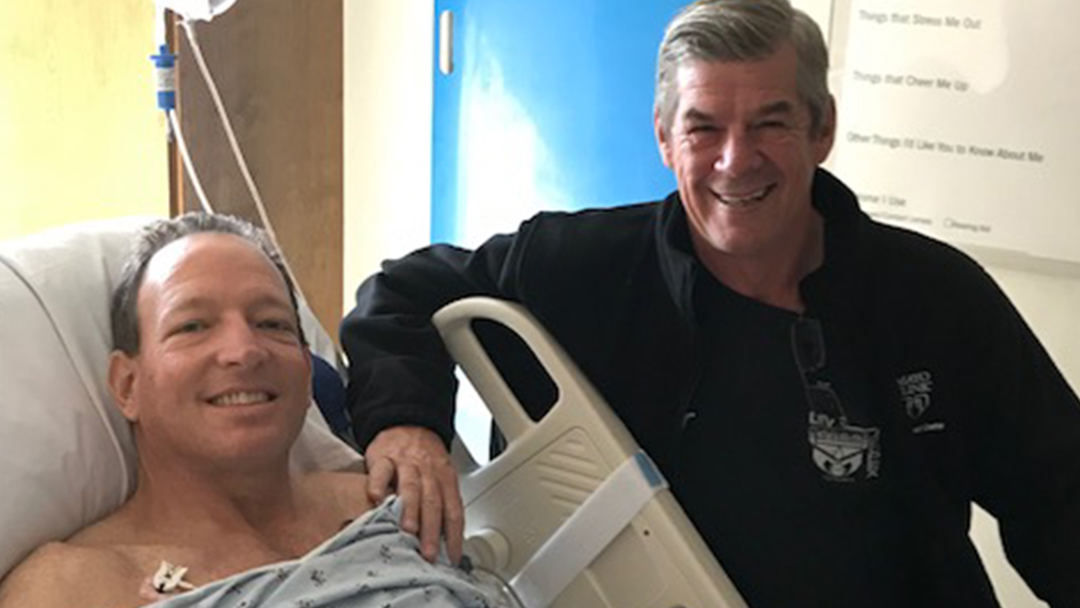 "Owner of the world's largest kidneys" was never a title Gene Okun wanted to have. Today, thanks to a living donor and a Mayo Clinic surgical team, he no longer does.

Gene Okun's kidneys had to go. They were big. They didn't work. And they were ruining his life.

"My stomach's so big that it affects me physically in everything I do — from waking up in the morning with morning sickness to trying to find the right seat in a restaurant or airplane because I don't fit," Gene told Mayo Clinic's In the Loop blog in August 2017 of his two 50-pound kidneys — some of the largest doctors have ever seen. "And even though it looks like I do, I can't eat very much food because there's very little room in there. Sleeping at night is also a challenge."

Gene’s kidneys had been posing problems for him ever since he was diagnosed with polycystic kidney disease. But he refused to take his diagnosis lying down. He assumed an active role in monitoring his kidney function and in finding a living donor for a kidney transplant. He also began visiting transplant centers around the country to see which one would be the best fit for him. That exhaustive search came to a fruitful conclusion when Gene met Mikel Prieto, M.D., a transplant surgeon at Mayo Clinic's Rochester campus.

"He's a gentle man who's humble yet very knowledgeable, and he's been doing this for such a long time," Gene says of Dr. Prieto. "He sat down with me and described exactly how he'd do my procedure and then ran through some of the complications we could run into. He didn't just sit there and tell me everything was going to be great, and that was something I appreciated."

Together, Gene and Dr. Prieto crafted a plan to get rid of Gene's enormous kidneys and set him on the path to a healthier, happier future.

A series of challenges

The size of his kidneys made Gene's situation complex. Healthy kidneys are usually about the size of a human fist. Both of Gene's kidneys had grown four to five times larger than a football due to his disease. That presented a unique challenge for Dr. Prieto.

"He's not going to have a lot of room to see what's going on in there," Gene said before the transplant. "It's going to be an interesting situation for Dr. Prieto, that's for sure. If nothing else, I appreciate his willingness to give it a shot."

Before that could happen, Gene needed to find a donor. He took a proactive approach to doing so by launching a social media campaign and online video series called Gene's Big Dumb Kidneys. Not only did Gene want to showcase what daily life was like for him and call attention to his own need for a transplant, he also wanted to raise awareness for others.

"We thought the whole idea of using comedy would be much better than just saying, 'Hey, Gene's really sick. Gene needs a kidney.' Because some people glaze over that."

"We thought the whole idea of using comedy would be much better than just saying, 'Hey, Gene's really sick. Gene needs a kidney.' Because some people glaze over that," Gene says. "We tried to find a way to make all of this humorous and, while not making light of a serious disease, making light of the situation that I myself am in, and then use that to hopefully lead viewers down a path to living donation. That gets serious pretty quickly."

For a while it seemed to be working. The online campaign and Gene's own efforts put him in contact with several potential living donors. But those possibilities fell through.

A friend in need

Watching all of this happen was one of Gene's oldest and dearest friends, Bill McNeese. "I think, initially, he thought I was going to be able to find a donor on my own," Gene says. "But when that wasn't happening fast enough, he stepped in."

Bill volunteered to be Gene's donor. At first, it looked as though Bill's test results would mirror those of other disqualified donors, due to his weight and other medical considerations. But after 10 months of diet and exercise, Bill tried again.

"He ended up losing 50 to 60 pounds and was no longer in need of any potential prescriptions," Gene says. "At that point, my doctors at Mayo felt like he might be a good candidate. We flew to Rochester together so Bill could go through three days of testing."

"I almost don't have words to describe how amazing it felt to find out Bill was qualified to be my donor."

Bill turned out to be an excellent fit. "He basically could have been a brother or a sister to me in terms of being a match," Gene says. With Bill approved to be Gene's donor, the transplant was scheduled for June. Gene was overwhelmed with emotion.

"I almost don't have words to describe how amazing it felt to find out Bill was qualified to be my donor. We're great friends and really more like brothers," Gene says. "By him doing this for me, he allowed me to avoid dialysis. Moreover, to end up getting a kidney from someone I know so personally just made it that much more special because Bill really cares for me, and I really care for him."

Before Gene could get Bill's kidney, Dr. Prieto and his surgical team needed to remove Gene's own massively enlarged and underperforming kidneys. It was a slow, tedious process that took longer than anticipated.

"Originally, we'd planned on a 6- to 7-hour surgery, but it ended up taking about 12 hours just because my kidneys were so big, and the way Dr. Prieto does it, laparoscopically, is a very unique procedure," Gene says.

The procedure began with Dr. Prieto making a 4-inch incision in Gene's abdomen. Through it, he then removed 19 liters of fluid from the kidneys so that they could be made small enough to slide out through the incision.

"I feel very blessed that I was able to have the kind of a care team for my transplant that I did."

Dr. Prieto performed both surgeries. "He did a full 12-hour day of kidney removal and transplantation," Gene says. "He's a very amazing surgeon and person with an equally amazing team behind him. I feel very blessed that I was able to have the kind of a care team for my transplant that I did." 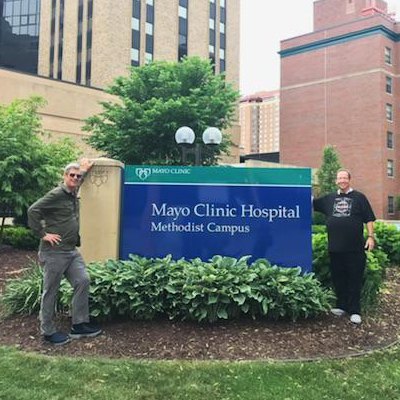 Since the transplant, Gene's been reveling in his newfound quality of life. "I'm doing very well now," he says. "I can take a full breath now, which I could not do before the transplant. My appetite is back, as well. I'm also now sitting in booths in restaurants, which I never could before. During my plane ride home from Mayo, I was also able to put the tray table down in front of me, which I'd never been able to do. I just feel generally better. It's an amazing feeling, and everybody who sees me now can't believe the amazing transformation."

It's a transformation that Gene says is only getting better with each passing day.

"Things are much better right now than I ever expected them to be, and I'm just very blessed and happy with the outcome," he says. "I'm so very grateful for everything Bill and Mayo Clinic have done for me. I can't thank them enough."

To show his appreciation, after the transplant, Gene donated his old kidneys to Mayo Clinic to help researchers better understand and treat polycystic kidney disease. He's also redirecting the time and energy he put into finding a donor for himself into creating a new website that promotes living organ donation.

"I don't think a lot of people know or understand that you can donate a kidney to someone while you're still alive, and that you can go on living your same quality of life with only one kidney," Gene says. "I'm now working to change that."