An Active Life Restored, Thanks to Regenerative Medicine 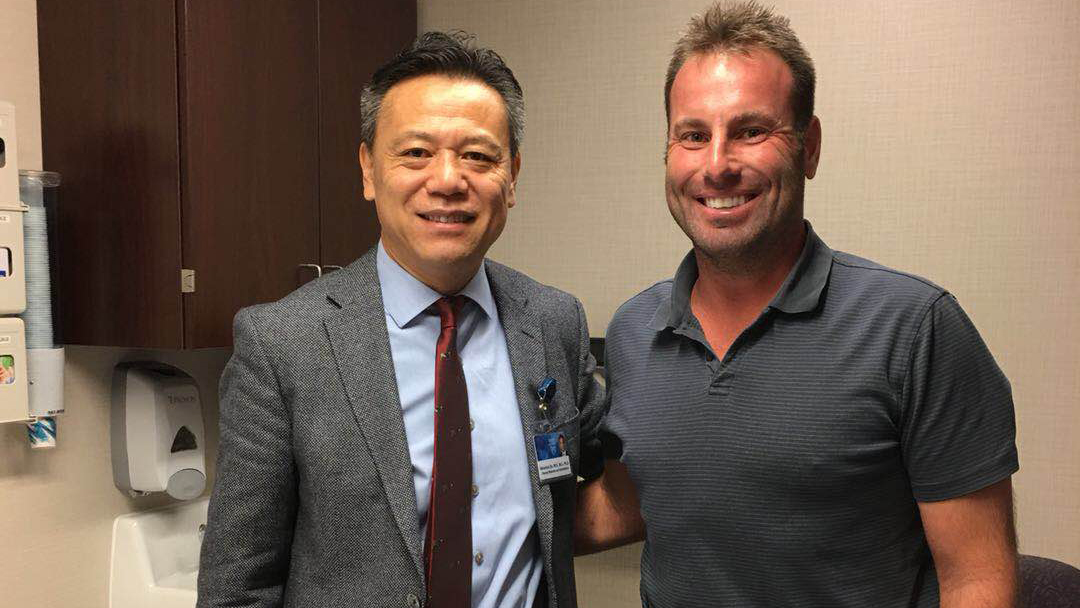 For years, Rick Amatuzio lived with severe back pain that kept him from the active life he'd always savored. But advanced diagnostic tests and regenerative medicine therapy at Mayo Clinic ultimately led to a complete recovery. Now Rick once again can play sports and enjoy the outdoors free from pain.

A typical weekend for Rick Amatuzio involves playing two rounds of golf, riding his motorcycle and mountain biking. But less than two years ago, the active motocross champion couldn't get out of bed or stand up straight. Debilitating back pain kept him from doing many of the activities he'd once enjoyed.

"I can recall crawling to the bathtub many mornings on my hands and knees in an attempt to loosen my body for the upcoming day," Rick says. "You feel helpless, emptiness, and like there's nowhere to turn for help to improve the situation."

Rick finally found the help he needed when he sought care at Mayo Clinic in 2017. Wenchun Qu, M.D., Ph.D., a specialist in physical medicine and rehabilitation and pain medicine, offered Rick a treatment that involved injecting stem cells into his spine. It worked. Now Rick's pain is gone.

"Dr. Qu is one of the best doctors I've ever seen," Rick says. "He didn't make promises, yet he gave me a lot of hope."

Rick can trace his back issues to 10 years ago, when the Duluth, Minnesota, resident had spinal fusion surgery to correct a spine condition known as spondylosis. Two years after that surgery, Rick began noticing a dull ache in his lower back that got progressively worse each year until he had a pain level of 7 out of 10 for most of the day.

"I was getting epidural steroid shots, which would help for a month or two, and then the problem would return," Rick says. "I was taking six or eight Tylenol a day."

When the pain kept him from getting more than an hour of sleep at night, Rick's local neurosurgeon, who had performed the spinal fusion, recommended he go to Mayo Clinic to pursue regenerative medicine therapy.

During his first consult with Dr. Qu in May 2017, Rick was diagnosed with a spine disorder known as adjacent segment disease. The disease had developed as a result of his spinal fusion.

"I was getting epidural steroid shots, which would help for a month or two, and then the problem would return. I was taking six or eight Tylenol a day."

"Adjacent segment disease is when you have a fusion of two vertebrae, and the next level of vertebrae have to move more to compensate, which causes those discs to wear out," Dr. Qu says. "Imaging studies showed he had quite active disease in the discs below the fused discs."

The next step was to do a test called a provocative discography. It could determine whether the worn discs were causing Rick's pain. The test involved injecting contrast dye in the discs to put pressure on them and reproduce the pain he'd been feeling. Test results confirmed the pain was coming from Rick's degenerated discs.

To treat Rick's condition, Dr. Qu recommended an approach that used regenerative medicine. Unlike traditional treatment for adjacent segment disease that destroy the discs by burning or fusing them, Dr. Qu would treat the disc degeneration with therapy to reduce the inflammation that was responsible for Rick's pain.

"Stem cells have growth factors which activate the dormant cells indigenous to the disc and restore the health of the disc by reducing inflammation," Dr. Qu says. "If you reduce inflammation, you reduce pain."

On Sept. 28, 2017, Rick returned to Mayo Clinic's Rochester campus to have a combination of platelet-rich plasma and bone marrow aspirate concentrate injected into his spine. The benefit from the treatment was not immediate. In fact, Rick's pain become worse before he saw significant improvement — an outcome that was not unprecedented, according to Dr. Qu.

"It takes about two months, or even longer, to see the treatment effect, and I have seen low-level inflammatory responses in between," he says.

But throughout that period, Rick felt the support of his Mayo Clinic care team. "Dr. Qu and his team stood with me and helped me through the process," he says. "They would call or email frequently to see how I was doing."

"I am extremely grateful for Dr. Qu and Mayo Clinic. They have given me my life back."

By the time he celebrated his 44th birthday in March, Rick was feeling much better. Since then, he's lost 30 pounds and can now carry his golf bag for 36 holes without pain. He says it's the best he's felt in 12 years.

"I wake up in the morning, and I can stand up straight easily. The burning pain in my back and the back of my legs is gone. I can sleep through the night. I can go out with my friends without discomfort. I work out every morning. I can go mountain biking," Rick says. "I am extremely grateful for Dr. Qu and Mayo Clinic. They have given me my life back. Every day is a blessing that I can do the activities I enjoy doing."