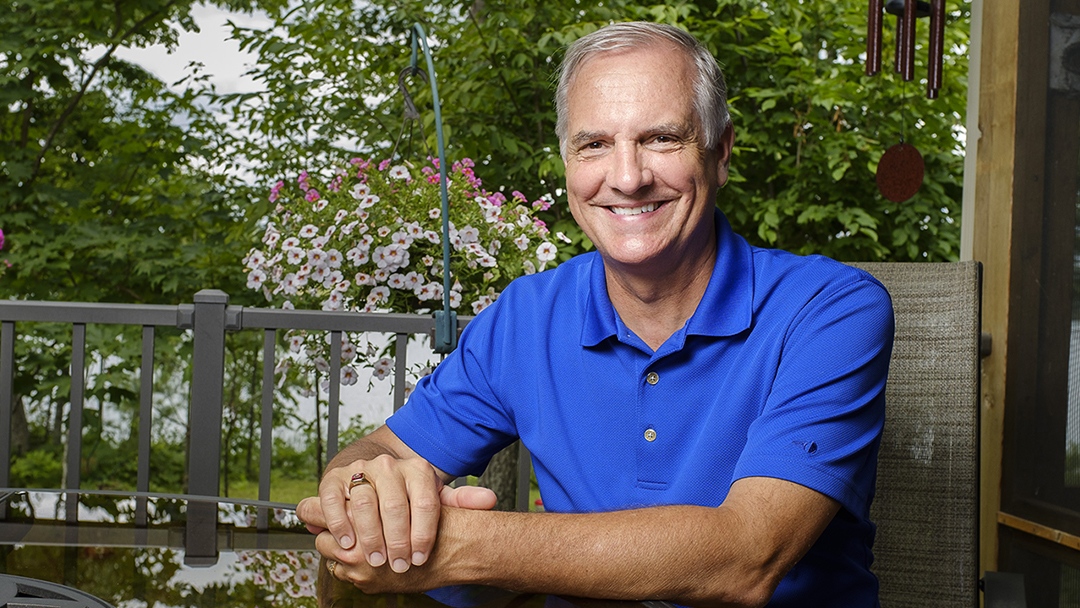 Diagnosed with stage 4 lung cancer, Kurt Jacobson has received state-of-the-art care from Mayo Clinic without needing to travel far from his home in northern Wisconsin.

Kurt Jacobson blamed Florida. He'd developed a cough in the Sunshine State and thought it might be from something in the air. But when Kurt, a former pastor, returned home, the cough remained. He wasn't worried, though. After all, it was November. The 59-year-old Cumberland, Wisconsin, resident knew all about winter colds.

But when the cough lingered into January, Kurt started to become concerned. So did those around him.

"People kept telling me to get it checked," Kurt says. He did and was diagnosed with sinusitis. "I went on an antibiotic for 10 days, and it had no impact," he says. "I continued to cough to the point of gagging."

At the end of February, a chest X-ray suggested Kurt had pneumonia. But another round of antibiotics again failed to curb the cough. A follow-up X-ray showed his lungs were unchanged. He was scheduled for a CT scan two days later.

"By that time, I'd begun to have other symptoms," Kurt says. "I was losing weight, and my appetite had decreased. I wanted to sleep all the time."

He'd searched his symptoms online, so the doctor's report that followed the CT scan did not come as a surprise. "They thought I had lung cancer," he says. Additional testing confirmed that Kurt had stage 4 non-small-cell lung cancer.

Stepping back from the rapidly developing story, I am encouraged and confident. I have you, along with a myriad of loving, life-giving family and friends — a circle of love, faithfulness and hope. I have top-notch medical professionals providing care — who are friends I cherish and experts I admire. … But foremost, I have the utmost trust in a God who gives life abundantly. Come whatever, no matter what, God is ahead, above, below, behind and beside me (and you, too!). What's better than that?

After his diagnosis, when Kurt was asked where he wanted to receive care, his answer was Mayo Clinic. He was told Eyad Al-Hattab, M.D., a Mayo Clinic Health System oncologist in nearby Barron and Eau Claire, Wisconsin, could see him in Cumberland the next day.

"I was surprised," Kurt says. "I expected to have to go to Barron or Eau Claire."

"Being able to access care locally takes the stress of traveling away."

Thanks to a partnership between hospitals, Dr. Al-Hattab sees patients in the community one day a month. That can be a tremendous benefit to people being treated for cancer.

"A cancer diagnosis by itself is stressful to patients and their families," Dr. Al-Hattab says. "Being able to access care locally takes the stress of traveling away. We can provide up-to-date, high-quality care right here in northern Wisconsin. And if a patient needs to access a higher level of care, we can seamlessly refer them to Eau Claire or Rochester. It's a very patient-centered system."

On March 15, 2018, Kurt had his first appointment with Dr. Al-Hattab. "He'd reviewed my records, and we had a good conversation about what lay ahead," Kurt says.

During that conversation, Kurt asked Dr. Al-Hattab for unflinching honesty. "I told him that as a pastor, I'd been with people in lots of settings facing lots of things," Kurt says. "I told him I was a realistic person and asked him to tell me what the picture looked like for me."

That would depend, Dr. Al-Hattab said, on whether Kurt's cancer had a genetic mutation or would test positive for PD-L1, a protein found on immune cells. With the mutation, he'd be eligible for targeted therapy treatment that likely would keep the cancer at bay for close to three years. Without the mutation, he'd receive chemotherapy, and the response to treatment likely would not be as good.

"Pray that this cancer has the genetic mutation!" Kurt wrote on CaringBridge. "The targeted oral therapy or immunotherapy would be easier, and potentially allow and provide a quality of life for a longer time."

Less than a week later, those prayers were answered. Kurt did have the mutation, called ALK.

"Dr. Al-Hattab came into the exam room with almost a skip in his step and a smile on his face," Kurt says.

The news meant Kurt would forgo chemotherapy in favor of targeted therapy that blocks the specific mutation his cancer harbors. The treatment consists of eight pills a day — four each morning and four at night. The treatment has been an unqualified success for Kurt.

"I started taking the drug on April 4. Within two weeks, I felt better," he says. "Within 10 days, the cough went away for the first time in 4½ months."

"It's extremely rewarding to see him respond so well and so quickly. In his case, this is science meeting faith."

In May, a chest X-ray showed Kurt's lungs, which had been full of tumors, were clear. He reflected on the development on CaringBridge:

Gone. Shot out. Blown away are those uninvited cellular intruders which gave me cough for months. A miracle for now. A product of extraordinary science all wrapped up in a pill. A gift of a wise, skilled, up-to-date oncologist. An outcome of your prayers. A combination of the power of faith bringing such a vast community together to root for me and bring about positive outcomes. Amazing. Unexpected. Appreciated. Awe-inspiring.

The next month, a PET scan came back clear, as well. The response to treatment was as good as could have been hoped. Kurt again rejoiced.

"If you have to have lung cancer, now is a good time to have it," he says. "Five years ago, my options would have been very different. Now for patients like me, who respond to treatment like I have, the average disease-free progression is 33 months."

By then he hopes another treatment will have been developed to outsmart the evolving cancer cells.

Dr. Al-Hattab shares Kurt's hope. "We've made huge strides even from where we were 10 years ago," he says. "There's constant developing of new treatments. It's an exciting time to be in oncology and taking care of patients."

That's particularly true when treatment goes as well as Kurt's. "It's extremely rewarding to see him respond so well and so quickly," Dr. Al-Hattab says. "In his case, this is science meeting faith."

Kurt will stick with the daily immunotherapy treatment as long as it continues to be effective. And he'll keep living his life as close to normal as possible, though he recognizes that life with a serious illness is a new normal.

"This diagnosis has amplified time," he says. "I'm working on how to be a good steward of the time I have left."

That's meant spending time with friends and family, and looking for new ways to contribute to the world around him. Kurt also has joined an online support group — something he's found surprisingly powerful.

"I never dreamed I would have access to this level of care where I live. It's extremely well-coordinated and highly efficient."

"I was always a supporter and never saw myself being the person in a support group," he says. "But being part of this group has been incredibly helpful. To know there are others out there living with the realities of this disease is an extraordinary thing."

Also extraordinary, Kurt says, is knowing that Dr. Al-Hattab and his colleagues at Mayo Clinic Health System are close by to support him.

"I never dreamed I would have access to this level of care where I live," Kurt says. "It's extremely well-coordinated and highly efficient. And Dr. Al-Hattab is an absolutely delight. I know I'm in the best hands with him."

He also rests in the confidence that whatever course his cancer takes, he's supported by friends, family and a loving God.

"What won't change is the power of prayer and even better, the mercy which is God's specialty," Kurt wrote on CaringBridge. "There's nothing else needed, is there? So press on my friends, living your amazing life with faithfulness and servanthood. I'll be back in touch another day."

The story or testimony from Kurt is very enciuraging and inspiring. I noted mostly the "faith" part. A diagnosis ofb cancer is always overwhelming but with faith immediately it is pronounced you refuse, reject and cancel and believe that God is in control. Am also happy to learn how targetted therapy helped him. I am also receiving that with Herceptin but alkng with chemotherapy. My first review by Pet scan showed tremendous response but i still have to get Herceltin by iv. Am being treated for stage 4 breast cancer. My hope has just been raised.